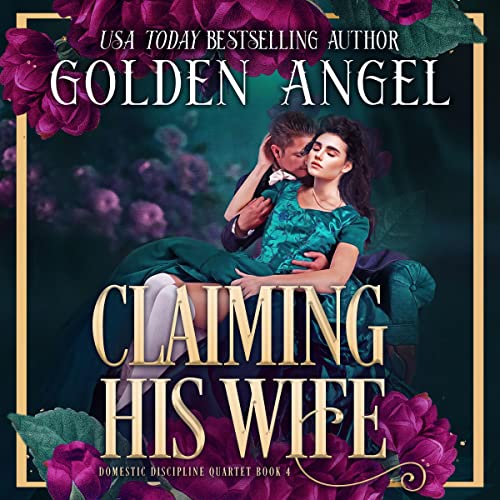 Written by: Golden Angel
Narrated by: S. Kitten
Try for $0.00

This is the fourth and final book in the Domestic Discipline Quartet.

Alex has made a lot of mistakes, but he is determined to reconcile with his estranged wife, Grace. He's willing to put their past problems where he thinks they belong - in the past - but insults and disrespect will be met with discipline. He's seen the marriages his friends have, and decided to take a page from their books. Unfortunately for him, Grace is not so willing to let go of past hurts, although she has no choice but to go with him when he basically kidnaps her and takes her to Bath. At least her friends are there for moral support, while she does her best to discover exactly why her husband is so intent on reconciliation rather than divorce.

Hugh and Irene are blissfully happy, having declared their love for each other, but they seem to be the only ones. Eleanor is pregnant and worried that her condition will mean the end of overt affection and desire from her husband - especially as he hasn't declared any kind of finer feelings for her. She thinks Edwin doesn't realize she's with child, and worries over how to prod a declaration from him. Meanwhile, everyone is gathered in Bath for Wesley's wedding to the brazen and rebellious Cynthia.

When these four women get together, it's no wonder that both trouble and bright red bottoms loom on the horizon. Each of their husbands is bound and determined to claim and tame his willful wife. This audiobook contains adult situations, including spankings, whippings, backdoor play, and explicit scenes.

This audio book is rated sizzling!

What listeners say about Claiming His Wife

I have heard the whole series and this is my favorite I really like the couple, great story! You really wanted these two to get together and work it out, it also has the other three couples with their wild stories. This is a great wrap up of a series that was steamy and so enjoyable! I received this free for review but I will be getting more from this author.

You needed to have listened to the first 3 books to understand this one, but I love how everyone's story came together for everyone's HEA!
I did receive this free audio book and am giving an honest review!

Alex is my favorite hero from the series.

Oh my everything I try to say about this book is a spoiler so I keep back spacing I really don't like spoilers not gonna do it. So much fun. Excellent conclusion to the series.
I'll be listening to this series many times in the future. This audio book was given to me for free at my request from the publisher or author or narrator and I provided this unbiased voluntary review.

Worth reading. I read it for free but it was worth paying to read it.

Great ending of this series 💜

“All’s Well That Ends Well.” That sums it up nicely.

Claiming His Wife, the last book in the Domestic Discipline Quartet, is as good as the previous three books. Although this is supposed to be the story of Alex and Grace, we see all others again too. I loved how Alex finally acted on Grace’s behaviour. Despite everything, the love was still there.
Every couple gets their own HEA and there is an epilogue as well. I loved it!

I liked the narrator. She has a very pleasant voice and used different voices for the different characters, so it’s easy to follow.

Good ending to this series

Good ending to this series of naughty women and their Dominant men. Written well and an absolutely fantastic narration from S. Kitten.
#audiobookobsessionreviewer

I simply adore the Domestic Discipline Quartet. The narration is fun and it's great to hear Grace and Alex's voice come alive

A satisfying and pleasurable ending to this quartet. Listening is as fun as reading. G A is full of delicious scenarios.

Golden Angel really knows how to write a book of friendship and love. It goes back to a time when women were spanked for getting into trouble. The women in this book actually like their spankings. Many of the problems are due to lack of communication. This story will have you laughing and shaking your head at times.
The narrator brings you right into this story that wraps up this series.