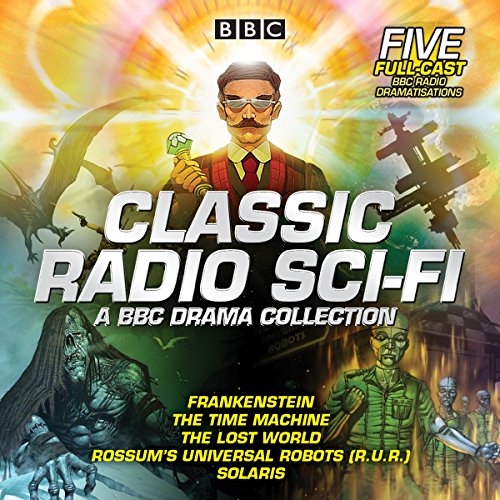 Frankenstein (1994) is adapted from one of the first science fiction novels, Mary Shelley's tale of a scientist who tries to play God and creates a monster.

The Time Machine (2009) dramatises one of the first stories to feature time travel, HG Wells' thrilling tale of an inventor who discovers a dystopian future.

The Lost World (1975) is based on a classic fantasy adventure story by Arthur Conan Doyle, whose notion of dinosaurs roaming our world was the inspiration for Jurassic Park.

R.U.R. (1989) is a radio production of Karel Kapek's thought-provoking play which introduced the word robot to the English language.

Solaris (2007) dramatises Stanislaw Lem's pioneering ghost story set in space, both a suspenseful thriller and a philosophical meditation on guilt and the human condition.

I began this collection with high hopes. I love radio drama of the 1940s and thereabout. Additionally, the ground-breaking science fiction of over a century is to be praised. Be this simply dated, and that the performers lacked an inspired belief that the stories were true, I found this to be of historical fascination but of minimal pleasure, escape, and even passing believability. Disappointing....

Every so often I get an audio performance book and then I’m reminded why I don’t listen to more of them. The audio is so uneven that it’s almost impossible to follow the story at times. One second people are yelling and the next they’re whispering. Some characters are front and center while others are far back from the mic and really hard to hear. You end up constantly adjusting the volume. With headphones it’s extremely jarring and totally detracts from the actual books.