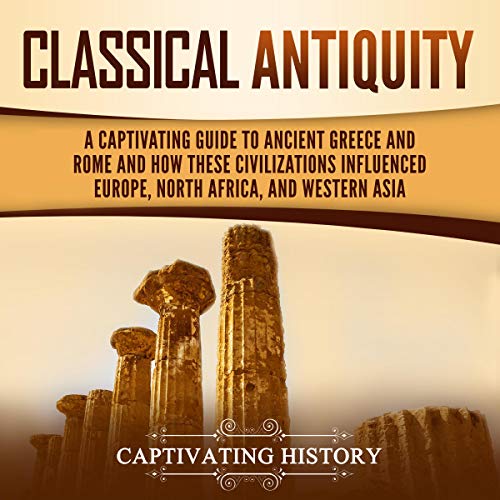 If you want to discover the captivating history of classical antiquity, then pay attention....

From about the ninth to fifth centuries BCE, the population of Greece grew unprecedentedly large, expanding from about 800,000 people to as many as 13 million. About a quarter million of these lived in Athens. The average size of urban households during this period grew considerably, a fact that suggests that food was suddenly available in excesses sufficient to keep larger families healthy and alive much more effectively than just a millennium earlier. Bigger families meant bigger armies and larger communities that would eventually grow into the metropolises of Classical Greece.

This incredible stretch of time is called classical antiquity, the age in which Western civilization first realized its potential and place in the world. The era brought on big changes for all the people of the Mediterranean. Thanks to new agricultural methods, seafaring technology, and trade, great civilizations sprang up around the sea, building large urban centers full of artists, merchants, political thinkers, scientists, and philosophers. As Greco-Roman culture grew, the relationships each city and realm had with one another also developed and changed.

In Classical Antiquity: A Captivating Guide to Ancient Greece and Rome and How These Civilizations Influenced Europe, North Africa, and Western Asia, you will discover topics such as

So if you want to learn more about classical antiquity, listen to this audiobook!

This book was very helpful

The best audible book ever was written. This author is the best resource!
This was a great supplement to any history buff.

The book is 3 hrs and 8 mins. It would be better in notebook fashion. It's really pretty good as a high-level view of places to go and things to do

The European history, I love.

I never understood much about Ancient Greece and Rome, and this excellent book is no less than a masterpiece.

Easily understood content through time from where we were to where we are now.
I would suggest this book to anyone engaged in European history.

This was a great supplement to our guided tour.

This book is very beneficial, and the author always has great content so if you like history, try it, if not, skip it.

This audible is extremely comprehensive.

I got this book to research Ancient Greece and Rome. What I loved the most about this book was that it gave me many recommendations as well. I highly recommend this to everyone who wants to visit Greece or Rome.

Nice coverage of the era.

A pleasant excursion through Greece and Roman history, including social, economic, and cultural history. Definitely recommended.

Not just a chronology

This book paints the most detailed and complete understanding of the story of Ancient Greece and Rome in a way that is fluid and demands the listener’s attention.
Fantastic content!
I would definitely recommend it.

This is without a doubt, one of the best books I have ever seen about Ancient Greece and Rome, it’s leaders, significant events, notable people, regular citizens, military engagements, and of course, governance.

Just the right amount of info!

The book is average. It's really pretty good as a high-level view of places to go and things to do. You will learn how these civilizations influenced Europe, North Africa, and Western Asia