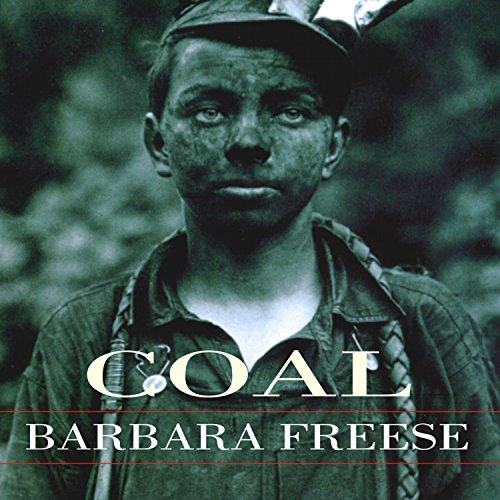 Written by: Barbara Freese
Narrated by: Shelly Frasier
Try for $0.00

The fascinating, often surprising story of how a simple black rock altered the course of history. Prized as "the best stone in Britain" by Roman invaders who carved jewelry out of it, coal has transformed societies, powered navies, fueled economies, and expanded frontiers. It made China a twelfth-century superpower, inspired the writing of the Communist Manifesto, and helped the northern states win the American Civil War.

Yet the mundane mineral that built our global economy, and even today powers our electrical plants, has also caused death, disease, and environmental destruction. As early as 1306, King Edward I tried to ban coal (unsuccessfully) because its smoke became so obnoxious. Its recent identification as a primary cause of global warming has made it a cause celebre of a new kind.

In this remarkable book, Barbara Freese takes us on a rich historical journey that begins three hundred million years ago and spans the globe. From the "Great Stinking Fogs" of London to the rat-infested coal mines of Pennsylvania, from the impoverished slums of Manchester to the toxic city streets of Beijing, Coal is a captivating narrative about an ordinary substance that has done extraordinary things  a simple black rock that could well determine our fate as a species.

What listeners say about Coal

This is really a book about global warming. The author is a lawyer for a state environmental regulatory body and gets interested in coal because of a case she worked on. She writes very interesting historical summaries of coal use in England, the US, and China. I agree with another reviewer that she lacks expertise on this topic and that her sources are vague and insubstantial.

She also lacks judgement and logic. She early on shows her hand with the statement that climate change is primarily caused by fossil fuels we burn". This is simply not true. The global climate is influenced in part by this, but her simplistic idea that we can stop global warming by dropping fossil fuels is unscientific. The planet has been a lot warmer in the past; solar activity over which we have no control effects climate etc.

She has a childike faith in the Kyoto Protocol, which (she does not mention) Pres. Clinton never even submitted to the Senate, even though his VP negotiated it. Many people object to Kyoto because it exempts China, India, and other nations, which might then attract jobs away from the regulated countries. Her answer is that the treaty does not say these jobs will leave the US. Such logic is staggering.

She also lacks judgment. She complains that the coal industry--unlike high tech--is controlled by large conglomerates, and also that US coal use is increasing. Yet she never stops to ask why these this is the case. Is the answer because of the very kind of environmental regulation she is such an advocate of?

She also seems to have a strange tolerance for Chinese pollution, saying that they are entitled to pollute their way to wealth, just as we did (it's only fair); meanwhile she bemoans global warming. She excitedly cites stats showing their pollution is now 3x over the limit, down from 4x.

In sum, the historical parts are interesting; the narration great; the author's apocalyptic agenda tedious.

Good, but more than a hint of bias

A fascinating subject, and while not as captivating as "Salt" or "Cod" by Mark Kurlansky, the author still holds your interest while describing the history of coal.
Unfortunately, her bias is clear - coal is and was a force of evil. The book dwells on the negatives from coal. While clearly the fuel has major environmental implications in the present world, even the historical discussion focuses almost solely on pollution, mining danger, etc. References to the historical positives are turned negative (i.e., coal permitted the rise of cities, but the book focuses on slums. Coal permitted improved production, the book talks about it's use in making weapons of war...)
When the author turns to modern times, that bias makes it a little hard to fully trust her claims. Discouraging, because there's a lot of intriguing information here on global warming and particulates.

It's still worth a listen, but I'd have preferred the work of a balanced scientist instead of a lawyer that reached a conclusion before starting her research.

The narration is excellent - clear and well paced.

There are some great parts, such as the history of coal in the UK, US, and China and its role in social history. However, I found it lacking in other areas of coal history I've read about in other books. Notably, Daniel Yergin's _The Prize_ discusses how WW1 was shaped by oil and coal use and how Nazi Germany used coal-to-liquids fuels produced in slave factories attached to concentration camps to compensate for oil shortages. These facts and South Africa's history of subsidizing coal fuels seem critical to understanding modern coal economics and lobbying. However, the book instead presents a litany of air pollution and climate problems with coal, which applies to pretty much all fossil fuels -- I've heard similar material before in now-countless newspapers and books. As a result, this large part of the book seems to me more like polemic than erudition. Overall, I'd say I learned something new from about 45-50% of the book, with not much new in the rest of it. Really, the book's more a persuasion piece, and I was looking for a lot more new information when I invested the listening time.

a history with an agenda

Somehow, I expected this book to do for coal what Mark Kurlansky's excellent book did for salt. However, it fell far short.

To her credit, the author is very up-front about her bias and her political agenda. Her interest in the subject grew out of her involvement in litigation concerning coal, environmental problems and global warming and the book is not disguised in its point of view. If you expect a vivid and detailed history without an agenda, this is not your book. If you don't mind picking through the point of view, it has some nuggets of interest.

Unfortunately, the reviews did not give much of a clue.

Written by a non-expert, and it shows

I should start saying this is an enjoyable and informative book. It covers a variety of aspects of the history of coal concetrating on the human story: those who made relevant discoveries, fortunes, lost their lifes, worked under extreme conditions to get it, etc.

My major concern with the book is that almost every statement in it is supported by sources such as "one observer", "one letter to the newspaper", "one poet once said", "one factory in Pennsylvania was said to"...

If you dig through 500 years of history, I am sure you can find accounts of individuals to tell ANY story. Perhaps I was influenced by having just read "Collapse" (a must read), or by the fact that I am an academic, but the research here was really superficial and doesn't give you the impression the author is letting the facts speak for themselves. My guess, however, is that there isn't a better audiobook outthere about coal, so if the topic interests you, this is it.

I feel, however, that if you spend 8 hours listening about coal, you should feel like you really know what you should know about coal, this book was written by a lawyer, so afer 8 hours you can say "oh, that's intersting", and wish a coal expert wrote a book on the topic...

As can be expected, Freese sees coal as the single most important substance humans have ever used. While she does make a cogent argument, she overdoes it at times.

I was a little bored with the description of the formation of coal in human prehistory, but the rest of the book really cooked, at least in my opinion. Some of the hightlights include: a discussion of the UMW (a once mighty union that has lost most of its members) and its history including the Molly McGuires, a discussion of why coal in this country is now increasingly mined in the West rather than in Appalachia, a description of the role of coal in helping the British Empire become supreme, descriptions of the giant Chinese coal industry, the revelation that the United States continues to be one of the heaviest coal using countries on the planet -- far more than other industrialized countries, a description of how British homes were changed as they moved from wood-burning stoves to coal-burning furnaces.

While most would, at first sight, consider petroleum to be a more important fossil fuel, Freese shows that coal has been and continues to be a significant sourese of fuel as we become increasingly dependent on cheap electricity in the United States.

This is a ponderous account about COAL and its effect on the environment - not about the people who were impacted by it. Judging from the cover, I though I would learn about the human beings who worked in the mines - not about a black piece of rock. The cover should have had a piece of coal with a baseball hat on backwards and a heavy gold chain around its neck saying "Coal Rules". If you have a term paper about coal, just coal, and nothing else but coal, this is your resource.

Was hoping for more history of the Coal, Not a platform for this eco nuts bias .

Excellent look at the history of coal

Contrary to some negative reviews, the author doesn't spend too much time dwelling on the politics of coal, but more so on its social and economic impacts. While most of the effect of coal burning was old news to me, the author expanded on the developing world history of coal, all of which was new information. Narration by Shelly Frasier was spot on; golden voice and measured inflection. I would listen again.