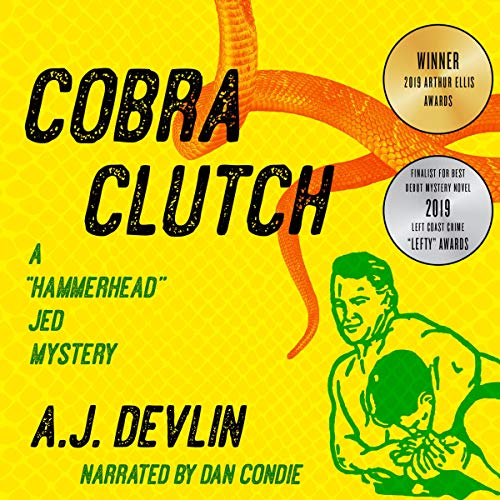 “Hammerhead” Jed Ounstead thought he’d traded the pro-wrestling world for the slightly less dangerous one of a bar bouncer and errand boy for his father’s detective agency, but the squared circle wasn’t quite done with him yet.

When his former tag-team partner draws upon their old friendship for help in finding his kidnapped pet snake, Jed finds himself dragged back into the fold of sleazy promoters, gimmicky performers, and violence inside and outside the ring. As the venom of Vancouver’s criminal underworld begins to seep into Jed’s life, a steel chair to the back of the head is the least of his problems.

Cobra Clutch is a fast-paced, hard-hitting debut novel by A.J. Devlin that features an unstoppable combo: a signature move of raucous humour with a super finisher of gritty realism.

“Cobra Clutch masterfully blends humor, mystery, thrills, action, romance, and heart into a hell of a story featuring a lively wrestler-turned-PI hero. The action scenes are intense, the quiet times heartwarming and engaging, and the humor expertly interjected to accentuate characters and breathe realism into the story.” (John M. Murray, Foreword Review)

“Cobra Clutch uses humor and gritty realism and includes a former tag-team partner, a kidnapped snake, sleazy promoters, and violence inside and outside the ring.” (BC BookWorld)

What listeners say about Cobra Clutch