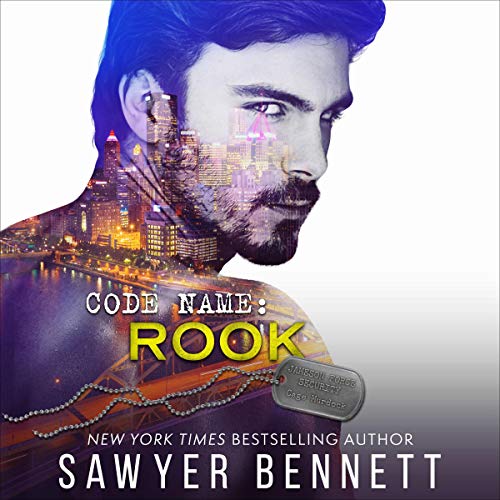 Being a highly skilled operative for a company like Jameson Force Security is exhilarating and important work...until it comes time to date. I like to keep my profession under wraps for a number of reasons. Some of what we do is top secret, most of what we do is dangerous, and more than one woman has tried to latch onto me because she was more enamored with what I do than who Cage Murdock really is. And since I’m more of a "here for the night" than a "here for forever" kind of guy, what’s the harm in a little white lie about my job?

My harmless deceit has never failed me. Until now. Because I met the most amazing woman and did the unthinkable. I married her. And now my beautiful, unsuspecting, probably-going-to-leave-my-sorry-behind-when-she-finds-out-the-truth wife doesn’t know that I’m not a used car salesman like I told her when we met.

As it typically does with lies, the truth is about to come out in a big way when Jaime unwittingly gets herself mixed up with some unsavory characters and I, along with the team at Jameson, have to intervene. Now I need to save my girl and hope I can save my marriage too. Let’s just say I have some serious explaining to do.

A sinfully seductive, suspenseful, thrilling, and intriguing journey to go on with Cage and Jaime. I enjoyed this story. Narration was fantastic!

This entire story is about how an impulsively stupid lie can lead to an entire false backstory and major trouble. Because this in Jamison there is also some action and suspense, but at the heart this is a pretty basic romance that includes the usual cast of characters from Jamison with the addition of the sexy redhead Jamie. Narration is great and this is a sweet addition to the series.

Another great Book from Sawyer Bennett. The story, characters and chemistry make Rook a great book and oh my......the narration was amazing!

What an incredible listen in this series. This was a storyline I was curious to see play out and by no means did it disappoint. There was lots of humor, great storyline development bringing these two together while giving us cameos from the others.

Aww I love it !! What a beautiful story. Deep sigh it’s exactly what I needed today .

The narrators did a great job bringing this one to life. Loved it!

Each One Gets Better!!

If you’ve read the other books you’ll be familiar with Cage. He’s the one who loves what he does is good friends with Anna who works at Jameson Security and also ex-military. Cage and Jaime’s story was great. As a member of Jameson Force Security, we’ve seen Cage be a big part of some their missions. He lives his life for his job and has no problem attracting a lady when he wants one. However he’s happy with one night stands.
*
He doesn’t do relationships until he meets a fiery redhead at a bar one night Jaime, she actually makes the first move and it floors Cage. Unfortunately Cage tells her a bogus story of what he does for a living and it throws a wrench into things.
*
He turns to Anna for advice after seeing Jaime for awhile and she’s not only stunned he’s actually dating someone but that he’s gotten himself into such a mess from lying.
*
Overall it’s another engaging story from the author and each one just gets better! I’ve loved this series from the start and this one is just as great as the rest!
The narrators were amazing!

Favorite of the series

This is the 6th installment in the Jameson Force Security series. I know many might shy away from a book in the middle of a series, but Sawyer Bennett writes her books in a way where these can be enjoyed as a stand alone book.

Cage Murdock is a retired Navy Seal and security operative for Jameson, on a night out at a bar he meets Jaime. They have a fast chemistry and Cage Lies like a rug to her. He lies about what he does for a living is the most extreme way, a used car salesman! seriously! Some how he is able to make that believable to Jaime, how i'm not sure still... but he does.

What was supposed to be a one night stand develops into a relationship, and as Cage and Jaime become a couple....Cage is still lying about where he lives, what he does for a living, and well... everything as the relationship deepens between the two. It begs to ask, how far can you go on lies and deception, and save a relationship?
That is what the meat of this book is about, the story development about what happens when the very foundation of a relationship is based on lies and deception. Can Jaime and Cage survive? Can they overcome ? Read the book to find out.

If you are looking for a new series to start, I cannot recommend the Jameson Force Security series enough, it provides many hours of listening enjoyment.

I felt like Cage and Jamie's Story was just the best one yet. Talk about knowing what you want and going for it. They were intense and also sweet. Can I have more of Cage... Please???