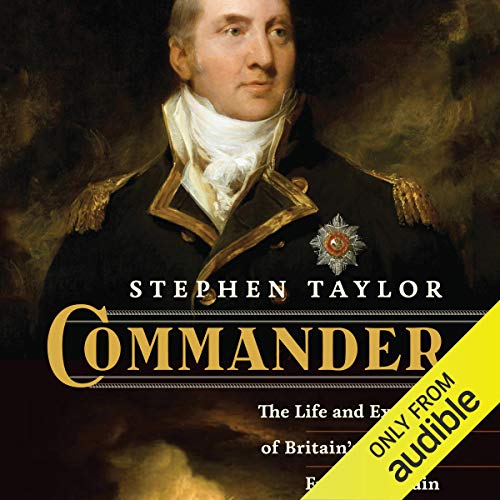 Written by: Stephen Taylor
Narrated by: Derek Perkins
Try for $0.00

An incomparable seaman, ferociously combative yet chivalrous, Edward Pellew might have served as the model for Patrick O’Brian’s Jack Aubrey.

Edward Pellew, captain of the legendary Indefatigable, was quite simply the greatest British frigate captain in the age of sail. Left fatherless at age eight, with a penniless mother and five siblings, Pellew fought his way from the very bottom of the navy to fleet command. Victories and eye-catching feats won him a public following. Yet he had a gift for antagonizing his better-born peers, and he made powerful enemies. Redemption came with his last command, when he set off to do battle with the Barbary States and free thousands of European slaves. Opinion held this to be an impossible mission, and Pellew himself, leading from the front in the style of his contemporary Nelson, did not expect to survive. Pellew’s humanity, fondness for subordinates, and blind love for his family, and the warmth and intimacy of his letters, make him a hugely engaging figure. Stephen Taylor gives him at last the biography he deserves.

What listeners say about Commander

There’s a technique of depicting historical figures based on their correspondence that seems to often miss the mark as far as giving an interesting narrative. This is one of those. Pellew was colorful and interesting enough to serve as a model for at least two famous fictional age of sail heroes - Jack Aubrey and Hornblower - but you could miss that fact in this sometimes boring description of his life and career. The story comes to life briefly in the second last chapter and offers some excitement. It’s not a bad book just not really as good as it’s subject deserves.

If you enjoy the history of the Royal Navy, you'll enjoy this book on Edward Pellew. What an amazing life and more amazing that he was comparable to Nelson at the same time in history though without all the fanfare. For readers, I think the most exciting part was his leadership at the Battle of Algiers - well written that I could picture the actions in my minds eye.

A perfect biography. A very interesting man and even better story. The author brings the Age of Sail to life. The narrator is perfectly English. I learned a lot and enjoyed it even more.

The Facts are just as interesting as fiction

Would you listen to Commander again? Why?

After awhile yes, it had alot of real information Facts that are interesting

What was one of the most memorable moments of Commander?

The battle for Algiers a real slug fest

Have you listened to any of Derek Perkins’s other performances before? How does this one compare?

My first one and he did a great job

Some of the incidents were very moving

Because it’s real! The real Aubrey; and the narration is superb! I was engaged throughout. Well worth the price and time if you appreciate naval history.