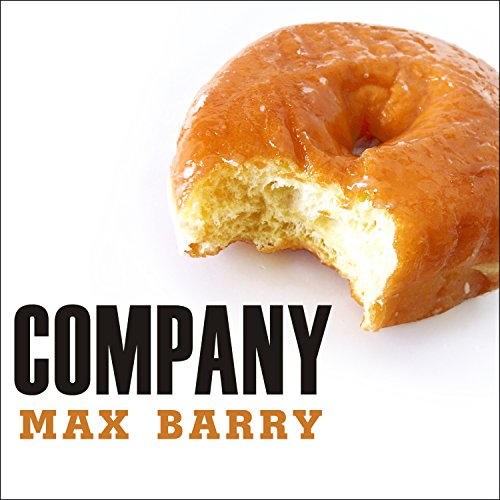 Written by: Max Barry
Narrated by: William Dufris
Try for $0.00

Nestled among Seattle's skyscrapers, The Zephyr Holdings Building is a bleak rectangle topped by an orange-and-black logo that gives no hint of Zephyr's business. Lack of clarity, it turns out, is Zephyr's defining characteristic. The floors are numbered in reverse. No one has ever seen the CEO or glimpsed his office on the first (i.e., top) floor. Yet every day people clip on their ID tags, file into the building, sit at their desks, and hope that they're not about to be outsourced.

Stephen Jones, a young recruit with shoes so new they squeak, reports for his first day in the Training Sales Department and finds it gripped by a crisis involving the theft of a donut. In short order, the guilty party is identified and banished from the premises and Stephen is promoted from assistant to sales rep. He does his best to fit in with his fellow workers, among them a gorgeous receptionist who earns more than anyone else, and a sales rep who's so emotionally involved with her job that she uses relationship books as sales manuals, but Stephen is nagged by a feeling that the company is hiding something. Something that explains why when people are fired, they are never heard from again; why every manager has a copy of the Omega Management System; and most of all, why nobody in the company knows what it does.

"Mr. Barry is a deft and focused satirist, and his sense of business ethics is right on the money." (The New York Times)
"[Barry's] at his funniest lampooning the suits that tread the stage, consumed by the sound and fury of office politics that signify nothing." (Publishers Weekly)

What listeners say about Company

There have been various comments about this reader…either love him or hate him. I happily align with the former.

Since there are many other sources for a review of the book, I’ll comment only what makes this different, the reader. With so many characters in the story, I found different voices the reader used for each helpful and delightful in the reading of this very clever story.

I rate William Dufris right along my other favorite reader, Scott Brick.

If you're a fan of "The Office" - either the BBC version or the one with Steve Carrell - you will love this book. The book includes everything you've ever been afraid of if you've worked for a large company.
Great narration by William Dufris, and funnier than most things out right now.
Very enjoyable.
Highly recommended.

Dark humor for the office crowd

Combine "The Office" with "The Borg" from Star Trek and you'll get an idea of what this book has in store for you. The characters are people easily recognizable by anyone who's ever worked in a cube farm or a large company - some are sad, some are scary and some are downright like-able - all have that sense of realism to them that makes them familiar. I enjoyed the dark humor and twisted take on how easily employees can be manipulated by gossip, clueless management techniques, and the whims of "upper management". This was a fun read overall and I think it would make a fantastic movie or TV series.

I recently started working in a large company again. Reading this book has provided me with many laughs; some while reading and some while sitting in meetings remembering passages. I may get this for my VP as a holiday present.

I found the book entertaining enough to listen to multiple times!

I enjoyed this book. It was funny and easy to listen to. I really liked the narrator too.

only made it half-way

Having belonged to Audible since 2003, I have listened to dozens of books. In most cases, I have made it all the way through--I find a book has to be pretty bad for me to give up. This was one of those books! I am not familiar with the author's work, so I can't say if it was the story or the narration, but I suspect it was a combination of both. The narration was annoying (I agree with the reviewer who wrote that it sounded like the narrator was auditioning for "I Love Lucy")---it tried to add too much, thereby masking the irony that the story was meant to convey. In addition the story itself was slow moving, perhaps an abridgement would be the answer. I would stay away from this book!


Ever have someone tell you a joke while nudging you with their arm on practically every other word? Annoying and exhausting, narrator William Dufris doesn't seem to understand that you don't have to "punch up" humorous writing to make it funny - just read it, and let the listeners decide. "Company" is different territory from Barry's surrealistic takes on marketing and government, and especially with a slower pace than his previous novels, Dufris gets in the way - that is, when he isn't confusing which voice to use or removing a syllable from the word "tilde."

Read the book - avoid Dufris' reading, perhaps one of the worst I've heard.

a better read than a listen

"Company" seems like it might be a fun read, but the audio production spoils it. The narrator lays it on thick, which makes this light satire seem almost unbearably cute. He also coughs and laughs and makes other guttural noises during character dialogue, even when the text doesn't specifically call for it. If that wasn't enough, conversations on the speaker phone, voice-mails, and even people yelling in the hallway get special sound effects. This is less of an unabridged read than it is a one-man show. Most audiobook listeners would be better off reading this one themselves.

It doesn't even deserve a star -- not an option

One of the most ANNOYING books ever written or read. Save your money, don't even think about it! Lame plot, horrible characters, terrible reader. Nuf said

You don't have to work in a large, nameless corporation to enjoy this terrific novel. But it won't hurt.

The characters and situations are very funny and while the premise is outlandish, everything is very real.

It's one of those books I was sorry to see end.