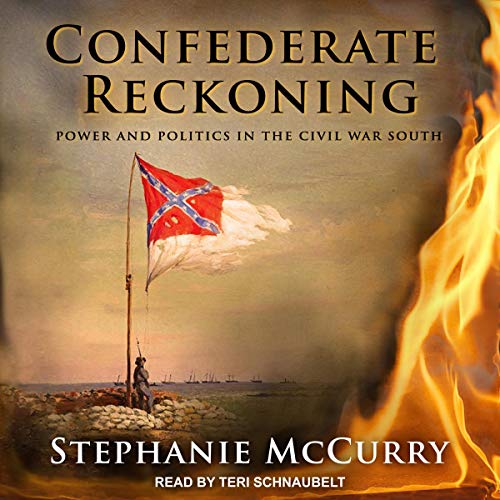 Written by: Stephanie McCurry
Narrated by: Teri Schnaubelt
Try for $0.00

The story of the Confederate States of America, the proslavery, antidemocratic nation created by white Southern slaveholders to protect their property, has been told many times in heroic and martial narratives. Now, however, Stephanie McCurry tells a very different tale of the Confederate experience. When the grandiosity of Southerners' national ambitions met the harsh realities of wartime crises, unintended consequences ensued. Although Southern statesmen and generals had built the most powerful slave regime in the Western world, they had excluded the majority of their own people - white women and slaves - and thereby sowed the seeds of their demise.

Wartime scarcity of food, labor, and soldiers tested the Confederate vision at every point and created domestic crises to match those found on the battlefields. Women and slaves became critical political actors as they contested government enlistment and tax and welfare policies, and struggled for their freedom. The attempt to repress a majority of its own population backfired on the Confederate States of America as the disenfranchised demanded to be counted and considered in the great struggle over slavery, emancipation, democracy, and nationhood. That Confederate struggle played out in a highly charged international arena.

What listeners say about Confederate Reckoning

This book is a detailed breakdown of the crazy hypocrisy of the slave holding south. It explains the greed and indignant hate that some whites had/have for an entire race of people for no reason at all. It also shows the blatant stupidity to start a war to preserve slavery when the majority of your population were slaves and in the end to think that they would voluntarily defend the very institution and people that enslaved them. The sons and daughters of the confederacy should shamefully demolish every statue they ever erected of these people and erase all of them from history books.

Behind the Scenes of the CSA

McCurry makes a very convincing case on how the very fundamentals of the confederacy lead to its spectacular destruction. Few books are about the internal nature of the CSA, and many books on this subject try to defend the indefensible.

Excellent history of the CSA

Great look at the role that white women and slaves shaped in the CSA. The ironic end of the CSA is powerful as well as the reasoning behind the Emancipation Proclamation.

a heading is required

the author tends to repeat the same points over and over. it is in interesting perspective.