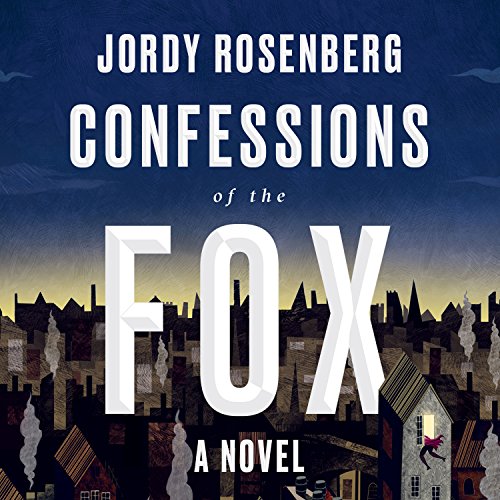 Confessions of the Fox

Written by: Jordy Rosenberg
Narrated by: Aden Hakimi
Try for $0.00

Recently jilted and increasingly unhinged, Dr. Voth throws himself into his work, obsessively researching the life of Jack Sheppard, a legendary 18th-century thief. No one knows Jack's true story - his confessions have never been found. That is, until Dr. Voth discovers a mysterious stack of papers titled "Confessions of the Fox".

Dated 1724, the manuscript tells the story of an orphan named P. Sold into servitude at 12, P struggles for years with her desire to live as "Jack". When P falls dizzyingly in love with Bess, a sex worker looking for freedom of her own, P begins to imagine a different life. Bess brings P into the London underworld where scamps and rogues clash with London's newly established police force, queer subcultures thrive, and ominous threats of an oncoming plague abound. At last, P becomes Jack Sheppard, one of the most notorious - and most wanted - thieves in history.

Back in the present, Dr. Voth works feverishly day and night to authenticate the manuscript. But he's not the only one who wants Jack's story - and some people will do whatever it takes to get it. As both Jack and Voth are drawn into corruption and conspiracy, it becomes clear that their fates are intertwined - and only a miracle will save them both.

What listeners say about Confessions of the Fox

Superb book. Loved it. Highly recommend for those looking for books with LGBTQ themes and the early Atlantic World.

Nothing short of a literary tour-de-force. A major novel. I literally sobbed at the end. Beautiful, engaging writing throughout. An absolute must-read for any lover of literature.

I really really love this, and I actually quite enjoy the interjections of the narrator; however, his talking about his ex at very important parts of the story bothered me somewhat.
Loved it so much I listened to it over the course of just two days (sped up, but still incredibly long) while cooking, cleaning, and playing games

another queer book that drags on and on and on... struggled to finish indeed!

Every trans person should read this. Every queer person should read this. Genuinely. Reading this book did more to heal the wounds within me than a year of sessions with my cisgender therapist EVER could. Blew me out of the water at every turn, and the way the author inserted himself made everything come together perfectly. By the end, it’s just you and your community, collectively mourning our heroes and hoping for a future that treats them better.

Don’t waste your money on audible. Books like these, you need to be able to see the pages as well. Audible takes your money and you still don’t get the book, just a disorganized person talking it out loud.

Whose book I ever read

This book just sucked. I honestly don't know how any one works ever enjoy reading it.

Captivating story. I found the author's frequent sidebars about a parallel modern day story distracting and not nearly as interesting as the main story.

Pretentious in need of a good story

I rarely don’t finish a book but this was impossible to tolerate after the first few chapters. The pseudo-academic pretentiousness was tedious. The narrator was pretty awful and monotonous too with a few lame attempts at a British accent.