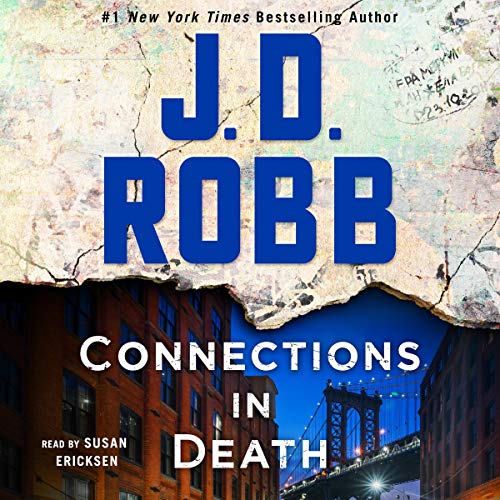 In this gritty and gripping new audiobook in the number-one New York Times best-selling series, Eve Dallas fights to save the innocent - and serve justice to the guilty - on the streets of New York.

Homicide cop Eve Dallas and her billionaire husband, Roarke, are building a brand-new school and youth shelter. They know that the hard life can lead kids toward dangerous crossroads - and with this new project, they hope to nudge a few more of them onto the right path. For expert help, they hire child psychologist Dr. Rochelle Pickering - whose own brother pulled himself out of a spiral of addiction and crime with Rochelle’s support.

Lyle is living with Rochelle while he gets his life together, and he’s thrilled to hear about his sister’s new job offer. But within hours, triumph is followed by tragedy. Returning from a celebratory dinner with her boyfriend, she finds Lyle dead with a syringe in his lap, and Eve’s investigation confirms that this wasn’t just another OD. After all his work to get clean, Lyle’s been pumped full of poison - and a neighbor with a peephole reports seeing a scruffy, pink-haired girl fleeing the scene.

Now, Eve and Roarke must venture into the gang territory where Lyle used to run and the ugly underground world of tattoo parlors and strip joints where everyone has taken a wrong turn somewhere. They both believe in giving people a second chance. Maybe even a third or fourth. But as far as they’re concerned, whoever gave the order on Lyle Pickering’s murder has run out of chances....

What listeners say about Connections in Death

The soft Irish burr is a thick newfieesq accent and the skinny dude is given a deep voice. Story is great so read the book and listen to something else.

Boring sums it up. Robb has turned it into a harlequin romance, with no interest.

Yay! For once, nothing about Eve's childhood!

I don't necessarily think this was a bad book, although not one of the best in the series. Very little suspense. However, I was SO glad to see that Nora did not once bring up Eve's childhood trauma (for the first time in 49 books!), that I had to give it 4 stars instead of 3. I was heartily sick of that, since it had been done "to Death". That, and the fact that Mira did not guide Eve into the crime's resolution as she usually does was so novel a turnaround that I look forward to her next book! Hope this pattern continues.

Susan Erickson, as always, did an excellent job. A little off on her narration of the ME, but otherwise, all of the remaining characters were consistent with previous books. I have purchased all of the audio books in this series, and I don't see myself stopping now! Definitely recommended.

I have to say that Susan Ericksen is one incredible narrator! The range of voices alone is awe-inspiring. Not only does every single character have their own voice; they all sound credible as well. You know what I mean, many narrators have a limited range of voices and when that range is challenged the rest of them don’t sound real anymore. That's never the case here. Ericksen truly performs this book perfectly. Each and every character shines, from the high-as-a-kite gang-banger to Eve's incredulity of human behaviour and Peabody's eagerness to play bad cop. It's all there. It's perfect and before you know it you are so immersed in the book that real life just fades away only to surface again when the book ends.

I do credit that to Ericksen. Sure J.D. Robb is a talented writer and the cast of characters are awesome, but Ericksen takes the words, the characters and adds another dimension and truly brings them to life. Because when she narrates you are transported to 2061 New York walking side by side with Eve solving crime after crime, seeking justice for the people that can’t speak for themselves.

As for the story itself, well I can't say that it brought anything new. If you've kept up with the books up until now you pretty much know what to expect. I admit that it's not the strongest in the series as I feel like the wonderful side characters didn't get nearly as much page time as they should. Then again, I did enjoy my time listening, so I will count it as a win.

Once again Susan does an excellent job. She was spot on. She is as much a part of this series as the ongoing characters. I enjoyed the book. I don't care how many things are repeated. As long as she hit all the marks that matter, it is a good book. It is all done in away it fit the moment.

It was good to see Crack in this one with a significant other. And it was good to see Strong in this one letting us know she is well and recovered from her injury. This book was a little softer. Eve bought her detectives prime donuts and pizza - something Roarke would do. Eve was a little different. I like Eve either way, mean or nice. There was not much of Mavis, and just a hint of Trina. This was a good installment. It showed the development of a few in the inner circle and kept my interest until the end. I liked this book more than the last one. I am awaiting the next one. After all these books, I am still interested in the series and want more.

God knows I love these books and feel like I actually know the characters but the last couple of novels I had trouble paying attention. They feel predictable. I remember reading Portrait in Death for the first time and I couldn't wait to get to the next part. Maybe as the characters change the books follow but the last two storylines just weren't what I have gotten used to. But, I would buy it anyway just for the characters I have loved for years!

I started reading this series because I was curious about how the author perceived the future. The book is set at a future date in New York City. I started with book 10 and was impressed so I went back and read all the books to date. Over the years I have kept up with the series. It is amazing the series is now at 48 books. This is the first book I felt did not hit Robb’s high standard. Something is a bit off in the story. Maybe it is the subject of gangs and drugs but Eve Dallas does not seem to have her usual fire-in-the-belly drive. I guess the author cannot hit a home run with every book. I did enjoy getting together with all my favorite characters.

The book is twelve hours and eighteen minutes. Susan Ericksen does an excellent job narrating the book. She has narrated every book in the series. Ericksen is a multiple award winning narrator.

Different, but just as enjoyable

Some of the J.D. Robb books grip you from the first page and take you for a wild, exciting ride. This wasn’t one of those books—but that wasn’t a bad thing.

Connections added another rich, layered dimension to the In Death world, providing a few more behind-the-scene glimpses of Eve and Roarke’s daily life: their interaction with friends, what Eve does on her days off, conversations between Roarke and Summerset, etc. J.D. Robb has built an amazing world in these books, especially the ever-growing circle of friends, the cops in Eve’s bullpen, and the other characters at Cop Central and the outside world. (I feel like I know these people, and have to remind myself that they are fictional characters.)

Susan Ericksen as the narrator has a lot to do with that. As always, she's done an exceptional job.. I both read and listen to these books, and her amazing range of voices and interpretation of various characters makes them more real and adds an extra dimension to the story.

Connections has a good, solid murder case that feels very real; it's something that you can really imagine happening today. Although there’s an action scene towards the end, a lot of it is lower key: interviews, finding evidence, building the case. While Eve takes the lead, it is, very much, a collaborative effort.

I thought the ending was one of the best in the series, and a perfect fit for the rest of the book.

Like many people, I’ve reread and re-listened to this series several times. Connections will be another that I return to again and again to enjoy.

JD has another hit on her hand. It kept me interested and wanting never to end. Now I have wait more then 200 days for her next book. Her characters are so well planned and her story telling is beyond compare. Please keep going JD...keep the "In Death" series coming.

Another compelling story about these characters who are themselves compelling. I really like the way they have grown and advanced so realistically over the course of this series. I look forward to each new step in their futures.

enjoyed it very much, great as normal. well worth the wait! could have had more Mavis and family, sure missed Bella in this one but have already listend twice it was great! loved the extra fun puzzle too, nice touch!

Too many caracters...story goes on and on with details over and over. I love this series but unhappy over long wait for disappointment.