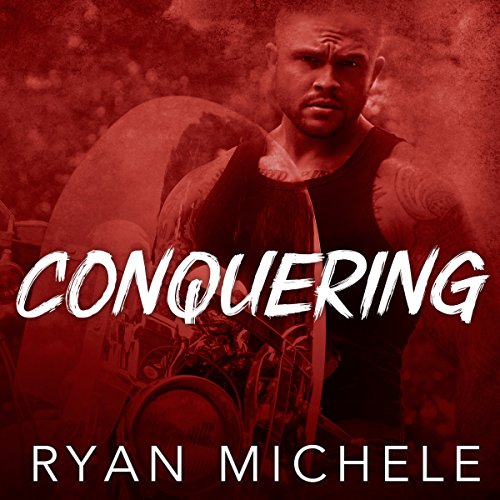 I fight for what's mine.

Growing up with a junkie for a mother, Stiff's responsibilities came young and fast, taking care of his brother with everything he had. If that meant getting his hands dirty, then so be it.

Becoming part of Vipers Creed MC gave him the family he and his brother never had, people they could count on. He vowed to protect them, even when that meant turning his back on the woman who gave him life, until Chelsea. He knew he wasn't good enough for her, but he didn't care. He had to have her.

No one messes with my family.

Chelsea Miller's life was simple: work, family, save for the future. Every day was the same. Her ultimate goal: live an easier life than the one she'd been dealt. That was, until her sister ended up bleeding, bruised, and fighting for her life.

Everything in Chelsea's life changed in an instant. And the cost of protecting her family was far higher than she had bargained for.

What listeners say about Conquering

A wild, intense, and exhilarating ride to go on. I enjoyed every thrilling moment of this book.
Narration was perfect!

This is a Sexy, Mc romance. The main characters are both in their mid twenties. The woman is a waitress working towards buying a house. The man meets her at her work. Her fathers drug debt puts her in danger so the man makes it his priority to keep her safe.

The narration is ok... not my favorite but it wouldn’t prevent me from listening.

The HEA is short and not too fulfilling. It’s only about a month into the future. This is a standalone but there are other books in the series. Overall, the story is ok, but nothing special

I enjoyed learning about the vipers Mc.Wish there were more about the others, Dawg,Boner and the rest of them

This was another ok book by Ryan Michele. The story line had a lot of potential, but felt way too rushed, and the way that Chelsea was described (and described herself) she came off as a lot older than 30 or so. I was left with the impression that she was hard and old before her time (I mean, really... her fingers are so calloused that she doesn't feel heat.... and she constantly talks about her "nasty" feet and "barking dogs"). I think the writer was trying to make her "real" and relatable, but it didn't work for me.

Also, there's a "twist" that really makes the Vipers look like idiots, rather than bada$$ bikers.... I personally like my heroes to be the actual heroes.

Speaking of the narrators, Brian Pallino did a great job, but Isabelle Gordon needs to work on her support characters' voices.... her main characters were fine, but when she did a voice for a smaller character (like the other waitress at the diner) they sounded as old as Chelsea's grandmother.

The female narrator killed the story!!

Love this series but the female narrator made it near impossible to enjoy this book. I finished only by focusing on the times the male narrator was doing his part. She read every voice like they were a bunch of geriatrics and at such a pace it was hard to even follow along. Please don’t use her for the next one.

Another fascinating story about love and good overcoming evil. Also family ties don't have to be blood related. The short story at the end was very good and gave the reader more insight into Zander.
The audible book was excellent.

aka fire sweet kind gentle loveable raised right so right .really good like the club but this story seems out of left field kinda does really tye into thw first book.

I’ve made this statement before. This author has a lot of potential, but I feel like she needs to invest herself into her characters and stories more. She seems to churn out the basic necessities for the plot and her characters. As soon as the climax of the story is reached and the main conflict is resolved, she abruptly ends the novel. Therefore, the result is an OK story and the potential for a great story is lost. This is particularly evident in the bonus short story, at the end, about Stiff’s brother Xander. Xander was a medically discharged Marine that was injured in Afghanistan. When he comes home, he struggles with PTSD. The story gives a brief glimpse of what he and his Girl, Gabby go through before Xander is convinced to seek help. Then there is a brief epilogue stating that Xander started participating in group therapy and joined the MC Club and Gabby joined a support group for the loved ones of Soldiers that suffer from PTSD. Then the story ends. There was so much potential for a beautiful story. The story could have included the beauty of this couple’s struggle, together, to help Xander through the scars that combat left. Instead, it was a dud. Hopefully as this author continues to write she rises to her full potential.
-V from Kansas

Excellent novel about a soldier returning from war and his struggle to adjust to civilian life.

I liked that it also included Gabby helping him.

It seemed to end a bit abruptly, I would have liked more information on their struggle to make life work.