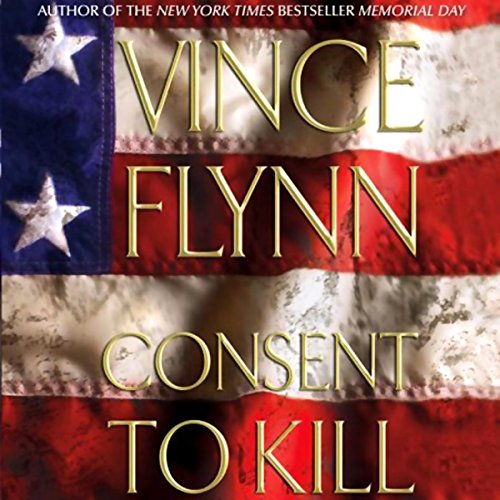 Written by: Vince Flynn
Narrated by: Stephen Lang
Try for $0.00

For years, Mitch Rapp's bold actions have saved the lives of countless Americans. His battles for peace and freedom have made him a hero to many, and an enemy to countless more. In the tangled, duplicitous world of espionage, there are those, even among America's allies, who want to see Mitch Rapp eliminated. They have decided the time has come.

Now, the powerful father of a dead terrorist demands vengeance in its simplest form, an eye for an eye, and Rapp instantly becomes the target of an international conspiracy. This time, he must use all of his vigilance and determination to save himself before he can turn his fury on those who have dared to betray him.

Consent to Kill takes listeners behind the headlines and catapults them to the front lines of the global war on terror. It sizzles "with inside information, military muscle, and CIA secrets" (Dan Brown). Vince Flynn mixes military technology with his exclusive knowledge of Washington politics to create a hero that Americans will wish existed outside the realm of fiction.

"He perfectly measures all of the ingredients for a fast and furious read." (Publishers Weekly)

What listeners say about Consent to Kill

His best work to date

Read by Guillan like nobody else can do. He paces this book so that you don't miss a thing and keeps you on edge throughout. It would be a perfect book to convert to a movie if Flynn did the screenplay. I believe it would be on of the best spy movies ever.

I liked the narrator of the first books but still a great series. I will continue to the next book. It's harder to follow when the voices change.

This was my first Vince Flynn novel but it won't be the last. Consent to Kill kept me interested the entire unabridged time.

There was music between passages of the book, supposedly to make up the desired total time to equal the unabridged version.

Abridged is a little too abridged.

Good Book, enjoyed it a lot, but the abridged version is not nearly as compelling as the unabridged.

Disappointed in narrator
should have some differences from character to character. Shouldn't sound the same.

storyline is very similar to other books. none of the characters are developed enough and the end was very predictable

very smooth and didn't want to put it down. i would highly recommend to read.

This is one of my favorite Vince Flynns books. I have it with George Guidall reading (performance)..as is most of Vince's books. This narration...is not very good at all...I bought it to see if I would like another voice...I DON'T!!! AND DO NOT RECOMMEND THIS Narrator.

Make sure George Guidall and Armand Shultz are the only Two people reading the new book. I'm eagerly anticipating this October. I really hope this Kyle guy can continue with Vince's outstanding stories and The Rapp character.