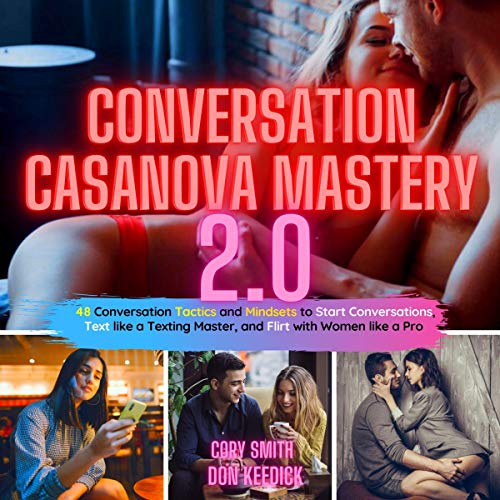 Written by: Cory Smith
Narrated by: Don Keedik
Try for $0.00

You see a beautiful woman standing only a few feet away.

She's HOT, and you know that you want to BANG HER.

You want to do something to start a sexual relationship with her, but yet you don't even know what to say to start things off.

You try to find some words to utter to start a conversation, and spark chemistry through flirting, but your brain freezes.

Not a word comes out.

Anxiety accumulates and you eventually give into one of these excuses:

"A cute girl like that has a boyfriend 100 percent."

"If I try to talk to her, it will be awkward and cringe because I suck at conversation."

"I won't know what to say, and will look like an idiot in-front of bystanders."

How many more times are you you going to put yourself through this painful situation of seeing a sexy, young woman but being paralyzed from taking action because you can't think of a few words to say to initiate interaction?

This book, based on thousands of approaches and interactions with women and over a decade of research, is:

The definitive guide to always knowing what to say, and being able to approach women anytime and anywhere.

Learn powerful secrets contained within this book, including:

If you have anxiety or fumble with words when you’re trying to talk to women, this book is for you! The author deconstructs all aspects of conversation and the social dynamics involved in creating attraction with it. Most books just tell you that you need to be confident when talking to girls, but Conversation Casanova Mastery breaks down all the nuance of confidence and how to avoid common pitfalls that make you sound common, boring, and make her want to eject. The 48 techniques are an easy read, with clear examples and even hacks to jump-start the path of seduction, that almost always begins with conversation. It’s the kind of book that’s hard to put down. It’s well organized with footnotes on advanced topics. Once I read it, I became more conscious of my sticking points in talking and referred back to the techniques to help me raise my game to a whole new level. I now look forward to engaging females without fear. I wish this book was available when I first started talking to girls in college. Don’t overthink it, get Conversation Casanova Mastery and devour the content, then master your mouthpiece.

Just listened to the audiobook (female narrator, very compelling) which was less than 2 hours. Very simple to understand and quick to the points. This will help any man stir up conversations instantly and be interesting. Remember, women talk to men several times a day. Most of them are boring. This book will help the reader be the one that stands out among the herd. Thanks!

It’s a good thing that the author gives no craps about what people think now. Because the choice of narrator is piss poor. I don’t know his intent is to help men get laid, and be better with women, or if he wants to make people laugh? This sounds like a parody of the red pill, that would be on Mad TV or Key and Peele. Did the author watch and read way too much Fight Club, because the narrator literally flips from, The Narrator to Tyler Durden, often in this book? He adds so much emphasis to being so bad ass, edgy and not giving a eff, that it’s comedic. Do yourself a favor. Get the ebook instead.

One of the most amazing audiobooks

This is a great audiobook, since it gives you exact and noteworthy data. Regardless of whether the writer attempts to attach you for a development in all actuality the audiobook is as of now helpful as-seems to be, and you can simply record the exercises and tips and go practice right away. It's not one of those book recordings where the valuable stuff is somewhere else behind a paywall. This is genuine, and I think all that you need is here.

Good book with lots of helpful advice although the narrator tends to use a lot of irritating sound effects and totally unnecessary emphasis. He sounds like he’s getting mad. Should have just kept it simple

the same recycling material from the last book. no one should read this last books will be just fine.

Cancel your weekend plans to listen to this!

Entertaining book to listen to with some good advise. One of the most colorful narrations in any audiobook which you will find yourself laughing out of amusement, there are some useful information here especially if you are in your 20s and early 30s and have never read any books on dating women.
Whilst listening to this book, you have to be careful to not get carried over by the performance of the narrator as you may miss some of the good stuff while laughing from all the special effects and broadway like performances.
None of the materials here is new or magical, and you have to take some of the advise presented with grain of salt as it starts off great but it drags on for too long repeating the same concepts, sometimes the narrators energy overpowers the material that you find yourself zoning out and no really listening as it becomes exhausting to listen to all the theatricals, maybe if it was 1/3 short, it would had been a 5 star book for me, but then I’m bit seasoned In dating life and am in my early 40s and been and done most of it, however i do recommend this book if you are starting off and need some confidence boost or if possibly want to date younger women!

A loved the idea that learning about approaching women and understanding the dynamics can be applied to other areas of your life. The emphasis on sex as the altimate goal sounded misplaced.

This audiobook is very well organized.


It’s well organized with footnotes on advanced topics. Once I listened it, I became more conscious of my sticking points in talking and referred back to the techniques to help me raise my game to a whole new level.

Author did an excellent job. I'll surely recommend this book to my friends and family. Happy listening !! good plans to become a chef , this book is recommended .