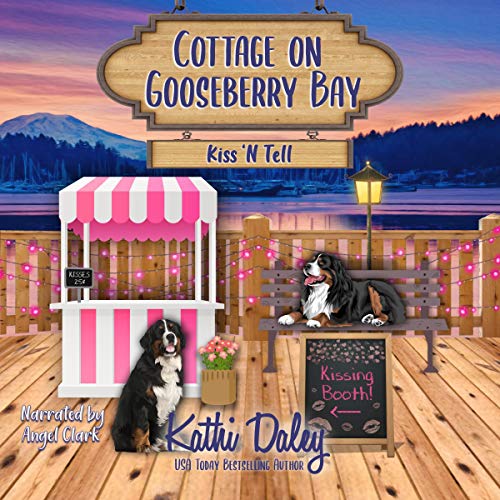 USA Today best-selling author Kathi Daley brings you a heartwarming mystery series about finding answers and fostering hope while building friendships and embracing the magic of life by the sea and small town holidays.

Ainsley Holloway had come to Gooseberry Bay to find answers about her past. She’d come to find an explanation for the dreams that haunted her after the death of the cop who’d both rescued and raised her. And she’d come to identify the family she couldn’t remember, but knew in her heart she’d once belonged to.

Ainsley hoped that by finding these answers, she’d also find healing. She hoped that once she’d resurrected the memories buried deep in her mind, she’d find peace.

In book four in the series, four friends come to the area over Valentine’s Day. While in Gooseberry Bay, they notice a kissing booth, which gets them to joking around, and they decide to come up with their own challenge - The Casanova Challenge - to prove once and for all which of the four is really the king of romance. Each of the four men agree to spend the weekend wooing the local women, raking up points for various acts such as buying a woman a drink, getting a cell number, actually going on a date, engaging in a make out session, and actually scoring. One of the men apparently set his sights on the wrong woman, since he ends up dead. Parker sets out to cover the story, pulling Ainsley and the others into her investigation along the way.

Meanwhile, Ainsley picks up some new information on the mystery she came into town to solve in the first place, and the return of an old friend to the area seems to cause friction between Jemma and Josie.

What listeners say about Cottage on Gooseberry Bay

I really like the book but do it like the reader. Will have to read them myself.

I love Kathi Dale's writing. I love the storyline for this series, but Angel Clark has to be one of the worst narrators I have ever listened to. The Narrator had no affect. It was like listening to an electronic voice.
so, while I would definitely recommend the book, I would say, read it and pass on the audio version.

I love this series! I'm not thrilled with the narrator but she didn't distract me to much from the story line. I will say these books keep getting better.