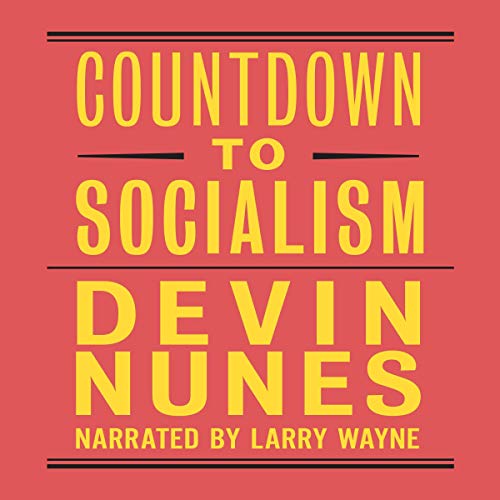 Written by: Devin Nunes
Narrated by: Larry Wayne
Try for $0.00

The Democratic Party has changed beyond recognition. Once the party of anti-communism and tax-cutting under President Kennedy, it is now dominated by a surging socialist movement and led by a presidential candidate who vows to “transform” America.

On a near-daily basis, the Democrats are issuing radical proposals to socialize medicine, industry, and higher education. So how can the Democrats win elections when their agenda is so far to the left of the American people?

That’s easy - it’s because the means of public debate are being manipulated.

In Countdown to Socialism, Congressman Devin Nunes exposes the nexus between the Democratic Party, the mainstream media, and the social media corporations. These three entities cooperate to blast out the Democrats’ message and downplay their extremism while suppressing and censoring conservative points of view.

Tens of millions of Americans are only seeing one side of the debate. The information they get from newspapers and social media is not “news” - it’s contrived content designed to help one political party and punish its opponents.

In the run-up to the most consequential election of our lifetime, rlisten to this book to learn how your information is being skewed and regulated to force America onto the path to socialism.

What listeners say about Countdown to Socialism

Short and to the Point.

I'm glad that USA still has a few Citizens willing to expose the Enemy from within.
I listened to this book several times.

I wish every American would love this country as much as this man does. God bless you Mr. Nunes, keep up the good work.

Talking about the Truth

Devin hit the right button in defining the deep state and how corrupts they are in trying to tranforms this country.

A must read by all Americans.
Spread the news!
As citizens of this Great Nation, we must take a stand and fight for the rights our forefathers provided.

Very informative
Well written
Narration excellent
Now we are in the midst of a political crisis. Who will lead this country? Biden will destroy us.

Short but very informative i will listen again and share with all who will listen.

TRUTH FOR OUR TIMES

We need to open our eyes and ears to what is really happening in our country. Mr. Nunes does an excellent job of explaining of the issues facing us with our corrupt media and tech giants.

Good short book but informative. Devin Nunes is a true conservative. He is one of the best people representing the Republican party in Washington.

Great book for those seeking a "red pill"

This book is a great awakening for those that sense or know something is wrong but aren't quite sure what's going on. Even if you're one who has been diligent with their news sources and know what has been happening, this book fills in a lot of gaps. Great listen!

This book was extremely insightful...... but scary at the same time To think that we are about to lose our great nation I’m not sure what we as the average person can do when the Democrats have so much control