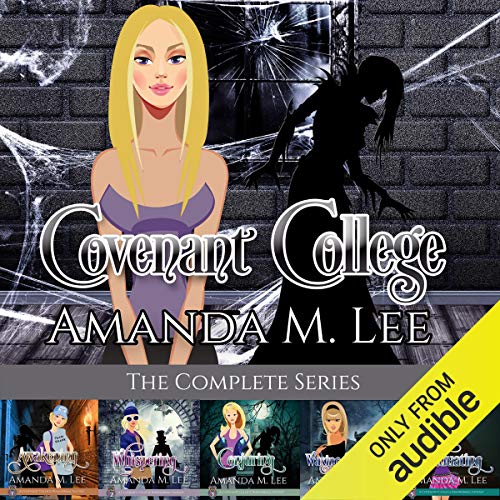 Zoe Lake is heading off to college - and she's excited.

It's not a regular college, though. It's a magical college full of vampires, werewolves, ghosts, witches, sphinxes - and pretty much everything else you can imagine.

Despite the monsters, it's often human nature that threatens her life most.

Follow Zoe through four years of college as she grapples with danger, magic, and love. This omnibus includes the entire Covenant College series: Awakening, Whispering, Conjuring, Waxing & Waning, and Graduating.

Get ready for fun, snark, and a love that promises to last a lifetime.

What listeners say about Covenant College

Had the Heroine of the story not been so utterly annoying, and had the male voices been done better (the narrator makes the male voices sound like a child pretending to be an adult), the audible version would have merited an additional star. The non-MC girl voices weren't great either, but they were passable.

What was most disappointing about Amanda M. Lee’s story?

The story takes a long time to get going. The first 1/3 of the first book feels like a "Day-in-the-Life" of a college student. There's practically no reference to, or hint of, anything supernatural, so it's mostly college students partying, having sex and bickering.

Lastly, Zoe was just plain irritating. She often thinks she's being snarky when she's just being mean. She's bossy and judgemental--actually wishing bodily harm on characters that annoy her. It's unfortunate because the premise, a college full of supernaturals, is a fun idea. I'm not super excited to keep going with the series, but I'll give it a go. I recommend buying the omnibus over buying each story individually because you're essentially paying the same price and there's always a chance the storytelling will get better.

If the male voices had been done better (the narrator makes the male voices sound like a child pretending to be an adult), the audible version would have merited an additional star. It was difficult to relate to, and really care for, the characters because of this. The non-MC girl voices weren't great either, but passable. One of the girl's voices is done in a high-pitched, grating tone and the other is in this weird, languid tone. If the narrator had dialed the voices back a bit, they would have been better.

What character would you cut from Covenant College?

All of the characters have a role and add to the mix, making the story more interesting than if there were fewer characters.

Overall, the story is okay and fine enough to pass the time. If the main character, Zoe, wasn't quite so annoying and the narrator's voices weren't quite so irritating, I would have rated this a solid 3, or if it were possible 3.5 stars, but unfortunately, that's not the case.

Just Couldn't Do It

Will be sending this one back. I had high hopes and really attempted sticking it out but everything about it screamed annoying.

I liked the stories and concept, but Zoey is beyond snarky.....she's a bitch. Her saving grace is that some of her roommates are worse.

The narrator is OK, but if you are going to hire a voice actor for college stories, at least get one who can pronounce Greek letters correctly. CHI is not pronounced like CHIA.

I loved the whole series!!!! I highly recommend listening to or reading these books! I wish there was more. I'm sad that it ended.

Do not waste your time

What disappointed you about Covenant College?

So many things... the story was inane. The protagonist was equal parts spoiled, entitled, self-absorbed and rude. I kept hoping some great calamity would befall her so she would change fundamentally. I gave up at chapter 10. To be fair, I got the collection of books for free and only paid 2.99 for the audio book. I wish I could get the 2.99 back.

I had hoped this story would be sort of like the Magicians, something with a cool magic system and great powerful protagonist. That didn't happen.

Would you ever listen to anything by Amanda M. Lee again?

The narrator was TERRIBLE. She can't do voices. The girls all sound whiny and annoying and the guys all sounded dumb. Her characterization of the protagonist really made me hate her more.

Not that I could find. I might some day, when desperate for something to do, read these books. I will not listed to this narrator again.

A faster pace would be nice. A deeper plot. Essentially it is reality TV in book form with a paranormal twist.

Could you see Covenant College being made into a movie or a TV series? Who should the stars be?

No. the story is too slow for a TV Show.

The humor and jokes throughout the book were good.

loved it from the beginning to the end and everything in the middle. anyone with a since of humor will love it.

This series was written for a younger audience

I would say if you're over 30 this is not the series for you. Most of the snarky comebacks and younger commentary or not amusing past The age of thirty. And unfortunately there was more of that and there was storyline.

not bad but not great

I enjoyed how easy the story was. I found that there were too many characters at times and a bunch were needless. the narrator was one of my least favorites ive ever listened to.

writing feels lazy to me

No real distinctions between character traits. No real use of magic, it's sporadic and no understanding of it. The main character is horrible, tries to force her way of thinking onto everyone. Too much trashing of other novels and uses pop culture references too much (easy way out of describing things). Sexual conversations between parents and children are inappropriate and uncomfortable. Her other series are better.