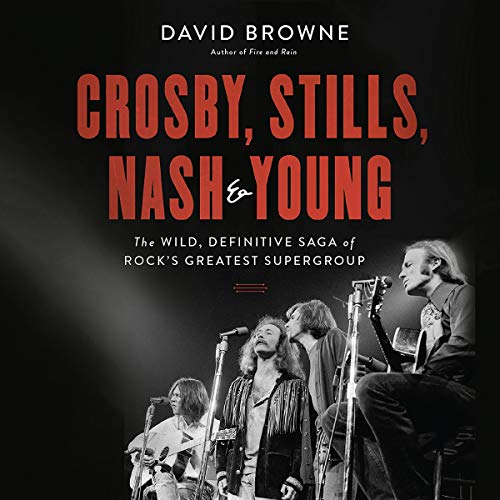 "This is one of the great rock and roll stories." (New York Times Book Review)

Even in the larger-than-life world of rock and roll, it was hard to imagine four more different men. Yet few groups were as in sync with their times as Crosby, Stills, Nash and Young. Starting with the original trio's landmark 1969 debut album, their group embodied much about its era: communal music making, protest songs that took on the establishment and Richard Nixon, and liberal attitudes toward partners and lifestyles. Their group or individual songs - "Wooden Ships", "Ohio", "For What It's Worth" (with Stills and Young's Buffalo Springfield) - became the soundtrack of a generation.

Over the decades, these four men would continually break up, reunite, and disband again - all against a backdrop of social and musical change, recurring disagreements, and self-destructive tendencies that threatened to cripple them as a group and as individuals. In Crosby, Stills, Nash and Young: The Wild, Definitive Saga of Rock's Greatest Supergroup, Rolling Stone senior writer David Browne presents the ultimate deep dive into rock and roll's most musical and turbulent brotherhood. Featuring exclusive interviews with band members, colleagues, fellow superstars, former managers, employees, and lovers - and with access to unreleased music and documents - this is the sweeping story of rock's longest-running, most dysfunctional, yet preeminent musical family, delivered with the epic feel their story rightly deserves.

"Few rock and roll sagas are as genuinely epic as this one, in which, over nearly five decades, four enormous talents/egos come together, find musical perfection, and fall apart in seemingly unlimited ways. With unparalleled skill and wry insight, David Browne chases down the details of CSNY's unique collaboration, uncovering larger truths about creativity and collaboration, debauchery and recovery, and a generation's harmonizing heart." (Ann Powers, author of Good Booty: Love and Sex, Black and White, Body and Soul in American Music)

"The long, tangled, thorny story of CSNY requires a writer of David Browne's immense skill to unravel, and he delivers beautifully. Sympathetic without being fawning, as astute a critic as he is a conscientious reporter, Browne chronicles the lives and music of these four iconic artists with unfailing intelligence, humor, and grace. This is a riveting read from beginning to what may or may not be the end of this fascinating band." (Anthony DeCurtis, author of Lou Reed: A Life)

"[Browne] appears to have talked to nearly every living soul with a part to play in the band's long career.... An excellent portrait of a troubled partnership...celebrates those fine moments when the band merged to make such epochal songs as 'Suite: Judy Blue Eyes' and 'Ohio.'" (Kirkus Reviews)

What listeners say about Crosby, Stills, Nash and Young

Well researched and comprehensive book covering 50 years of the group both together and separate.

Lots of conjecture based on patchwork of info

Author in an attempt to tell they story presents CSN in a rather poor and light. As if they were helpless souls in need of Neil Young. Don't get me wrong a lot of good background but I think the story is colored in a way that is less than believable.

Comprehensive, but how did they the Music?

I hate biographies that focus on the artists foibles, and comment only passingly on the creative process. To me, this fits in with biographies written by Kitty Kelly and Albert Goldman, who focus completely on scandal. The only difference here is that Mr. Browne does not despise his subjects. He seems to identify with their left wing politics, which I actually find to be their least appealing aspect. I do not look to rock legends for guidance on political issues, I do appreciate that CSNY reached their lofty position in the pantheon of Rock n Roll because of their consistent ability to connect with their audience on both an intellectual and viseral level, with music that transends cultural barriers. They have never let their internal demons or their personal battles stifle their creativity. Creating great, timeless music that thrives with subsequent generations is not as easy as Mr. Browne portrays, nor is a hobby of otherwise self centered and self indulgent jerks. It is a rare gift, and to have it come together in these four individuals expressed in the purest of harmonies is more than a small miracle.

Struggled to keep my focus

It just sseemed to be like Charlie Brown's teacher, I couldn't follow it and would drift off and not be able to pay attention. I'm sure it's a good book, I just couldn't take it.

Couldn't finish this one

I can't tell if the writing is sub-par, or if it's just the absolutely awful narrator. He must be the LEAST rock n roll narrator of all time. The story itself is somewhat interesting, though the writing reminds me of someone who was never cool but who's trying really, really hard to be cool, using lots of cliche language & unoriginal thought. I got through about 10 hrs of this one before giving it up.

Wow what a read

In my youth many bands carried equipment my family and I serviced. This band I only serviced the Leslie speakers on a few occasions. This was a long, long book filed with issues I never noticed though seeing them at shows in New England area over the years. Great read

Crosby continues to amaze. Young as well. Stills has done his part in a Laurel Canyon doc. Only Nash has remained silent.

Very long book with complicated lives and many interlocking albums. A discography should be included, since the author would had one when he wrote the book. Lowered my ranking to this otherwise fine book.

I found that the story was very interesting and kept my attention. but it was hard to ignore the annoying delivery of the reader. he pronounced names incorrectly. my only criticism about the book itself is the authors need to use intricate vocabulary. I consider myself not a slouch when it comes to vocabulary and terminology but some of the words were ridiculous.

This is a compelling and thorough history of all 4 musicians and their body of work.