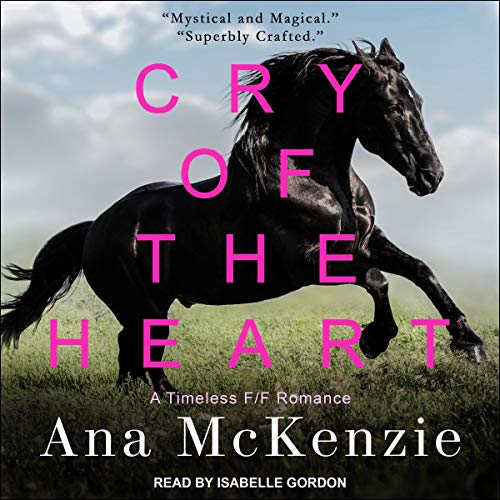 Cry of the Heart

Written by: Ana McKenzie
Narrated by: Isabelle Gordon
Try for $0.00

When Colette Remington sees the black horse, she realizes it looks just like the one she dreamed of as a child - a dream that helped her through so many hard times. When she lands a job looking after the horse, it is like it was meant to be, and she thinks that bringing the rescue animal back to health might be as healing for her as it is for the horse.

What she doesn't count on is Josie Tearney, owner of the horse, and the most startling, intriguing woman Colette has ever met. The attraction, it turns out, is mutual, but the last thing Colette thinks she deserves is a relationship with someone who's grounded, competent, and whole - all the things Colette isn't.

Josie, who runs her own business making witchy teas and essential oils, is as planted on the land where she lives as is her garden - which makes her strong, centered, stable - and lonely. All her friends have moved to the city, and she's not at all sure that Colette won't leave as abruptly as she arrived. Josie lost her mother when she was young - and she won't take the risk of being abandoned again.

But healing can happen when you least expect it, and the heart knows how to lead the way.

What listeners say about Cry of the Heart

like, I can't explain it. I just couldn't connect with this book. I love the witchy and higher Psychic stuff, love the horse with my whole being. but the story the grandmother and ruined it for me. the ending also seems like it could've used an epilogue

I am not into witches (although I am one) but this one was very well written, and engaging.... and you only meet the witches towards the end.
Narration was superb

I loved Cry of the Heart. I loved the two MC's. Colette and Josie. Well, if you include the horse, Rivendale, there are three main characters. Friendship and compassion for animals and other human beings seem to be the main themes. There is a bit of "fey" wisdom thrown in. Isabelle Gordon does an excellent job with the narration.