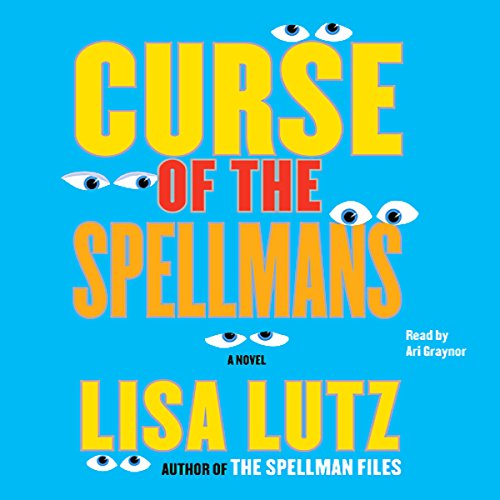 Written by: Lisa Lutz
Narrated by: Ari Graynor
Try for $0.00

Their first caper, The Spellman Files, was a New York Times best seller and earned comparisons to the books of Carl Hiaasen and Janet Evanovich. Now the Spellmans, a highly functioning yet supremely dysfunctional family of private investigators, return in a sidesplittingly funny story of suspicion, surveillance, and surprise.

When Izzy Spellman, PI, is arrested for the fourth time in three months, she writes it off as a job hazard. She's been (obsessively) keeping surveillance on a suspicious next door neighbor (suspect's name: John Brown), convinced he's up to no good - even if her parents (the management at Spellman Investigations) are not.

When the (displeased) management refuses to bail Izzy out, it is Morty, Izzy's octogenarian lawyer, who comes to her rescue. But before he can build a defense, he has to know the facts. Over weak coffee and diner sandwiches, Izzy unveils the whole truth and nothing but the truth - as only she, a 30-year-old licensed professional, can.

When not compiling Suspicious Behavior Reports on all her family members, staking out her neighbor, or trying to keep her sister, Rae, from stalking her "best friend", Inspector Henry Stone, Izzy has been busy attempting to apprehend the copycat vandal whose attacks on Mrs. Chandler's holiday lawn tableaux perfectly and eerily match a series of crimes from 1991­-92, when Izzy and her best friend, Petra, happened to be at their most rebellious and delinquent. As Curse of the Spellmans unfolds, it's clear that Morty may be on retainer, but Izzy is still very much on the case...er, cases...her own and that of every other Spellman family member.

(Re)meet the Spellmans, a family in which eavesdropping is a mandatory skill, locks are meant to be picked, past missteps are never forgotten, and blackmail is the preferred form of negotiation - all in the name of unconditional love.

What listeners say about Curse of the Spellmans

What a difference the narrator makes

I listened to these books out of sequence, I first listened to the later books ready by Christina Moore. The story and maybe more importantly the performance of these books was hilarious. Ms. Moore;s dead pan deliver is spot on for this character. Now, we come to Ari Graynor, who sounds like a high school English Lit student reading her paper aloud to the class. No inflection, no dramatic performance, just....blah. i made the mistake of purchasing these two books without listening to her. Lesson learned. I don't know if I'll be able to finish them.

Why abridged? Why this terrible narrator? I love this series and I've listened to it several times since I purchased, regularly skipping over this book and the next because the performances are so terrible. I listened to it recently just to give it another shot. Unbearable. Luckily I was able to find at least book 3 (Revenge of the Spellmans) read by Christina Moore on Amazon. Loading up the 8 CDs worth of tracks is worth it to not have to listen to Ari again. If a Christina Moore version of this book exists, please please please make it available. This sucks.

I think the Spellmans are great fun. I read the first book, thought it was hilarious, and wondered whether the reader of an audiobook would do justice to the quirky characters. I was pleasantly surprised; the reader does a superb job, and the second book is just as funny as the first. Recommended light reading.

The performance ruined this for me

I loved the first Spellman book (The Spellman Files) and was really excited to start this one. Sadly, this is a different reader than the first and Ari Graynor's performance ruined it for me. Her inflections, unnecessary accents, and overall performance rob the writing of its clever, dry tone and turns the dialogue into something on par with an episode of Saved By The Bell." I don't even know if I can finish it. SO sad, because the first one (read by Christina Moore) is laugh-out-loud funny, bordering on genius.

Not As Good As The First

I really enjoyed the first book in this series so I bought this book and was about a quarter of the way through but didn’t have time to sit and read an actual book so decided to buy more credits to get it on audiobook so I could finish it but I wish I would have saved the credit.

It didn’t state anywhere that it was abridged but only a few minutes in and I knew it had to be because it was missing parts of the book I had just read. It finally stated at the end of the book it was abridged. I hate abridged audiobooks and would not have bought it had I known that beforehand.

The narrator was just okay but definitely did not portray Isabelle Spellman as witty and with a dry sense of humor that the books portray her to be. I found the narrator to have sort of a monotone voice that really takes away from the story.

The story itself was fine and I like Lisa Lutz’s style of jumping around but I think in the future I’ll stick with the actual books and not audiobooks for this series.

I generally read mysteries and thrillers and do love that there is a sense of mystery to these books but they are not dark and instead are humorous and relatable to some degree especially the relationships between family members.

This is the family you'll love to...observe at a distance. You hope you never have to meet them, but still can appreciate their quirkiness. Once again there are several good chuckles and creative story lines. Sometimes though you wonder if they ever have a real case.

I liked the first book in the series better, but the writing was still good. Something in Ari’s voice was harder to stomach this go round- it was higher and more nasal. I listened at 1.5 x speed to get through it. Even then some of the pauses between what I guess were paragraphs were exceptionally long. Long enough that I’d look down at my phone to see if it had stopped playing. So I took stars away for performance.

Enjoyed the book, but they changed narrators in this book from the first one. I didn't enjoy this narrator as much.

NARRATOR DOES MAKE ALL THE DIFFERENCE!

What did you love best about Curse of the Spellmans?

I loved book no. 1! The next two books in the series were very close to breaking the deal. It wasn't so much the story, it was the shock of a different narrator for books # 2-3. Christina Moore's variation in voice, accent, speed, and tone is what made the characters all so funny to me. I guess someone figured this out because she is back to narrate book # 4.
Thank you!
DG

Thought Izzy would have made smarter decisions with her years of experience. Not a fan of the readers voice or delivery.

Ari Graynor was fabulous and the story was fun. I'm looking forward to the next book and hope there are many more to come.