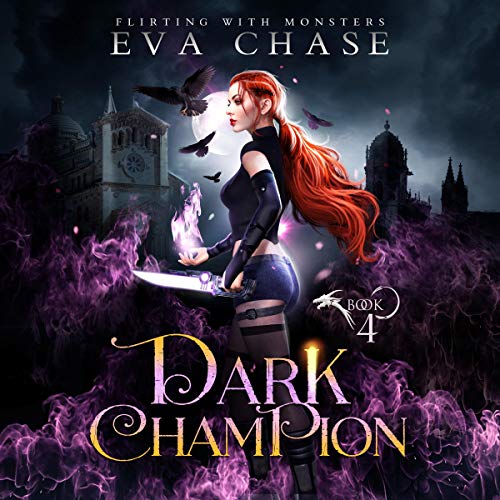 When life hands you demons, it’s time to make a little destruction.

I thought I wanted to know what I was. Now that I’ve discovered the answers aren’t so pretty, it turns out there are no take backs.

The most powerful monsters in existence fear this one mortal thief. Unfortunately, that means they’re set on stamping out my existence. The demon who was my strongest ally has been caught in the middle, his freedom and his life on the line.

And that’s before we get into the genocidal psycho who’s about to unleash a catastrophe that could destroy both our worlds all by itself.

I have my work cut out for me, even with my monstrous lovers by my side. Can I become the champion of my darkness, or will it consume me instead?

Either way, it’s going to be one hell of a ride.

Dark Champion is the fourth and final book in the Flirting with Monsters series. If you love kickass heroines with sass to spare, drool-worthy monsters who have their own sense of morality, and steamy romances where there'll be no choosing required, dive in now!

What listeners say about Dark Champion

This has definitely made it to my top two RH series! The story is fantastic! I love that the author pulled in Vivi and Sortia's friendship at the end. I felt like the voices not being consistent between the POV chapters was a little odd but still a good performance!

Epic end to the story

Honestly, I am sad this series is over I really enjoyed it.

I enjoyed the new take on shadow monsters/demons/creatures. I loved all the character growth and development.

This book brought all the story pieces together, and it was epic!

When life hands you demons, it’s time to make a little destruction...

A fantastic ending to a lovely series though I am sad it is over. But I will be rereading very soon, you can count on that.

This was a really good book with a strong storyline and an even stronger and bada** heroine. Every moment is this book was magical.

Perfect for readers of urban fantasy.

Narrators did a lovely job of giving these characters life for the grand finale.

Not bad, but also not great.

I listened to all 4 books in the series because I wanted to know the whole story, to see if it would develop more and to see where things would go. I found plenty of little plot holes, and honestly was annoyed that the ending was so simple. Spoiler- she never even meets or faces off with the Highest. And her change in mindset after Omen temporarily dies (wtf?) was not done very well in my opinion. They also never mention that she saved the original 3 mobster dudes, which is was annoying to me because maybe Omen wouldn't have been such a dick all the time if they had just told him that. But even when they were all recounting that Sorsha had saved them, those 3 didn't speak up. Also, the battle with Tempest was meh. They also didn't explain the sickness or the cure she was trying to make in any kind of detail.

As for the narrator... She read the whole series in basically the same tone the entire time - even if the book says that the characters said something in a different tone, she kept using her upbeat one. If a character's voice broke, hers stayed uplifted and unbroken. If a character shouted, she would do a whisper-shout kind of thing. Honestly made me laugh at that part, when it was supposed to be serious. I think she should read the books once before narrating them so that she can infect the emotions of the characters instead of reading it all in one general tone that doesn't match the story most of the time anyway.

If you like books that are more about relationships than story development, this is not a bad series to pick up. Especially because the price is fairly low compared to other books.

The series was just awesome! And I loved the ending so much! Loved the character development and the world that was built. Would love to see the characters again, yes I would love a spin off lol.

I really enjoyed the whole series though some parts get a bit sexually explicit so only appropriate for 18+.

I absolutely loved this

Story stays on path each book gets better and better ! All four books are well worth it !

I really enjoyed this series it had a good happy ending good storyline fun and entertaining.

Great Ending to the Series

This was such a good ending to the series. Everything wrapped up nicely. It was also left kind of open for more. I thought the action was great and thrilling. I would recommend this series! I was given this book by the author in exchange for an honest review.

She can be a monster if she needs to be

Sorsha is soooooo not happy to discover herself in a dark, damp place chained to a lumpy bed with her hellhound, shadowkind lover staring at her. She does finally get to find out about Omen's servitude to the shadowkind's Highest. He can finally be free of them if he just takes her to them and drops her off to her death. When Thorn shows up and is willing to fight his boss to save her, she can't bear to see either of them hurt and tells Omen she will go willingly to the Highest. He decides that maybe if they can defeat his old pal Tempest that maybe the Highest will leave her alone. No pressure.

Sorsha and her allies will have to use all their tricks to try to stop the Sphinx's plans to kill off both humans and shadowkind. Sorsha fights to keep her fire under control so she doesn't inadvertently make the dire prediction made about her come true but if it means keeping her guys safe, she is not afraid to burn the world down.

I was given an advanced copy of this book by the author. My review is voluntary.