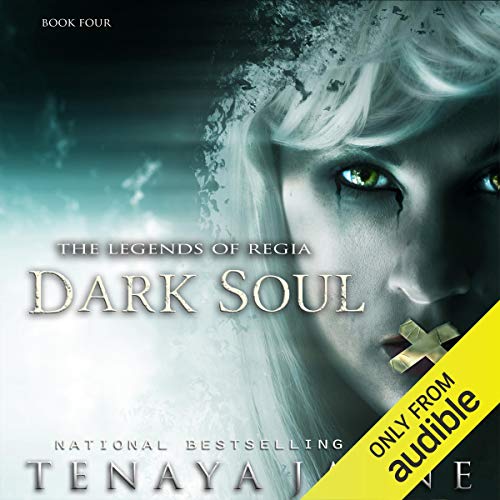 Written by: Tenaya Jayne
Narrated by: Khristine Hvam
Try for $0.00

Thief. Murderess. Sacrificial messenger. Netriet has faced death many times, but she never consented to the transformation she endured the last time her life was pulled back from the edge of death. She's compelled to live a solitary life for fear the shadow inside her will terrify others. Lonely, Netriet longs for acceptance and friendship. Joining up with the Fair, a haven for misfits, she believes she's found home and love with Merick. The ghosts of Merick's past haunt him. Helplessly attracted to Netriet, he's sworn to help her destroy the shadow within, but losing his heart to her cripples him with fear. Mistakes and misunderstanding push her away, and Merick's forced to watch her flee into the arms of another man.

Torn between two men, Netriet's true nature is drawn to one, while the shadow yearns for the other. At war with the darkness, Netriet must choose, or let the shadow swallow her completely. The fate of Regia's new republic hangs in the balance as a new enemy arises, backed by a group of violent insurgents bent on destroying everything Forest has worked for. Desperate for intelligence about the terrorist group, Forest learns the leader wants not only to claim the throne, but also her life.

What listeners say about Dark Soul

Forest is just a wonderful character in these books, I just couldn't put them down!

Story was good because the series is good

Dark Soul did go dark, but not where I thought it would. I was hoping for a more streamline interactions with Forest. I wanted to see Forrest struggle a little more with the moral components of her new job. With that said, the story that was crafted nicely. Especially the Bale/Netrit relationship. That was a surprising way to include Bale, who was horrible and I am glad he got his due in the end. I disliked that man very much, but strong feelings towards a character means a good story. The people of the fair and Cyrus’s appearances made my heart warm and that cliffhanger……… OMG Tenaya Jayne… you are driving me crazy, but I guess it is alright and a smart thing to do. Over all I enjoyed the story and look forward to reading the nice one.

Some storylines ended, some began, some expand, some contracted, nothing too place, a lot took place. Like most transitional volumes in a series this one is ending some things and preparing for the rest of the series. So gave it a 4 star as this volumes seemed to do that better than other series I have read, where you left wondering why the author didn't add a chapter or two on the beginning or end of the volumes between this volume you just wasted good time reading or listening to.

This volume does seem to have a purpose and is not just to sell more books. Its a 4 star because its a transitional volume and I usually give them 3 or less depending on how they are written. this being above average.

if the author was fishing, she just set the hook.

This the best written in the series thus far. You really begin to feel for the characters, not just observe them.

The only story I care about is Forest and Syrus. All others I skip through.

I have really enjoyed the books leading to this one and may have overlooked the one about Shi but I found it important to the series. Many characters and never a dull moment. It's seems as though Forest has grown a lot in the fourth book although not much time has passed. 5 stars. Narrators make audiobooks better. Enjoy.

Another great continuation of this story!:)

This one took a look into aka "Netty" or her actual name Netrete who was brought back to life by Shy and suffers from an unknown entity she calls the "shadow " that entered originally into her eye and continues to talk to her and causes her to do things that darken her soul she has a hard time trying to fighting the shadow at times she try everything from ignoring it trying to kill herself to end the nightmare but even that is out of her control.

I couldn't wait for each book, as they are so exciting ! Each book has been better and better!

The best narration of the series yet! The story is amazing in print, and read well here too. The flow of this particular story itself allows it to translate well to reading, whereas, if we're honest, some books can't. I recommend!

love love love this series this book however....