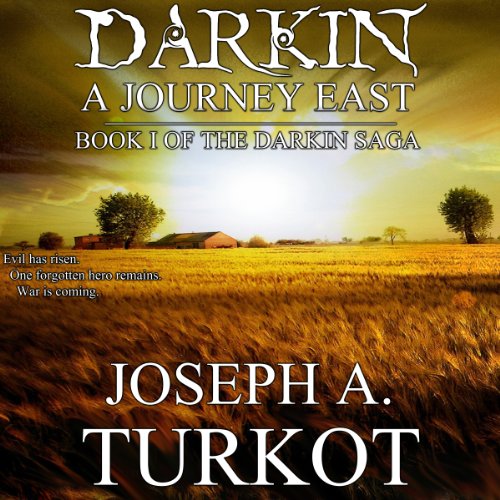 Written by: Joseph Turkot
Narrated by: John Badila
Try for $0.00

The greatest dark wizard, long thought dead, has risen anew; in his wake marches the vast army of the Feral Brood. None could have foreseen the total evil set to descend upon Darkin.

A long age of peace has left the land devoid of heroes. Slavery has taken hold of the world’s commerce. All hope rests in the rebellious spirit of one slave.

Alien bloodlust besieges Adacon late one night - an impulse drives him to murder his guards and set out to find and kill his oppressors. Escaping into wilds unknown, he realizes the great peril awaiting him.

A strange hermit appears from under a sand dune, claiming to know "magic". He believes that if they work together, they can build a band of warriors powerful enough to change the fate of the world. Can they find any still harboring valor and chivalry in their hearts - or will their quest be for naught, ending in the ruin of the world?

What listeners say about Darkin: A Journey East

A dark night in the city. Uncaring. Unforgiving. Unrelenting. A glaring street light washes down on the sidewalk, where a white chalk outline marks an audiobook's very last moments of life. Beside it, the weapons that laid it's brief life to rest: An author's pen, still wet with ink, and a battered steel microphone, unplugged after the murder.

In this case, both the author and the narrator conspired against the audiobook. Poorly written, and horribly narrated. There are no excuses for this audiobook. NONE.

Authors and narrators, avoid this tragedy. Listeners, please move along. There's NOTHING to see here.

I won Darkin a while back in some contest on Facebook. I am not even sure which one it was, or why I was in it. I just got an email from some stranger saying I had won this book. I did not even know what genre the book was at that time. I will have to go back and find the email and thank them now though.

Back then I started to listen to it, but the opening to this book is slow, the language is a bit odd, and the narrator's accent meant I had to listen extra carefully as he pronounces certain words in a way I am not used to hearing. Well I gave up on it and set it aside.

Just recently I came across this again and decided to give it another go. I am glad I did. The story was a joy to listen to once I got used the manner in which it is told.

If you like epic fantasy, this is would be a good option to check out. The only complaint I have is that the ending of the book makes it feel like it is only 1/2 a book, instead of a part 1 of 2. Without giving away any spoilers, I will just say that if the last 1-2 minutes were done differently it could have still hooked you for book two and felt more like a whole book.

I have already purchased book two, I did that long before I reached the end but I have not started it yet. I am concerned about the talk of aliens, but I will reserve judgement until I see how it is handled.