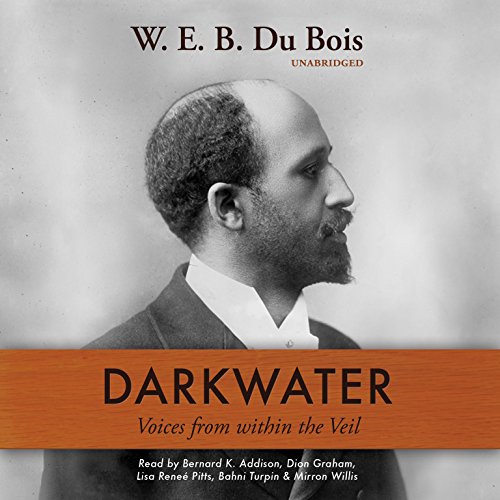 The distinguished American civil rights leader, W. E. B. DuBois first published these fiery essays, sketches, and poems individually in 1920 in the Atlantic, the Journal of Race Development, and other periodicals. Reflecting the author's ideas as a politician, historian, and artist, this volume has long moved and inspired readers with its militant cry for social, political, and economic reform. It is essential reading for all students of African American history.

What listeners say about Darkwater

I would recommend the audiobook of Du Bois' "Darkwater" to a friend because it is his best book. I love his "Souls of Black Folk," but "Darkwater" took me into the uncharted territory of Du Bois interweaving essays, poetry, and short stories. His standout proto-feminist essay "The Damnation of Women" is one of the earliest and greatest feminist essays by a man and in the short story "The Comet" Du Bois writes a science fiction story that is both political and entertaining. I highly recommend "Darkwater" as THE Du Bois book to give to friends.

What other book might you compare Darkwater to and why?

"Darkwater" has no other comparison. It is singular in a class by itself. It is even better than Hemingway's first book "Three Stories and Ten Poems." In "Darkwater," Du Bois is at the top of his game as a deep, creative thinker.

I have not listened to any of the five narrators’s other performances before, but they did a masterful job in switching off to perform essays, stories, and poetry as if they were their own thoughts and words. I heard Du Bois' mind at work.

Yes, I want to listen to this book all in one sitting. It is deep, meandering, but with a sharp focus. It is not widely known that Du Bois wrote poetry and short stories. As a poet and short story writer myself, I cheered to read the little known work of this master writer.

Do not stop at reading Du Bois' "The Souls of Black Folk." Read his "Darkwater" as well. If given a choice, I would choose "Darkwater" over "Souls." It is fun, creative, and political. I sense and grasp this man in his entirety when I listen to "Darkwater."

He was writing 100 years ago, but the brilliance of Du Bois is absolutely relevant today. Breathtaking work!

I have appreciated W.E.B. Du Bois as an essayist and writer of historical texts, but now I appreciate, with great excitement, his fiction. Powerful!

DuBois essays are still startling relevant today. I really liked that each essay was read by a different person---it made it much easier to recognize the shifts in topic/essay. The only improvement I'd want is to have each essay dated so it's a little easier to discern what historical events sparked each essay.

A book I didn't know I needed in my life and yet one I don't think I could now live without.

I enjoyed the book, A peek inside Mr. Du Bois thoughts. Worth your time 😊

interesting that it ended with a story of a black man saving, serving and protecting her. 😒😒