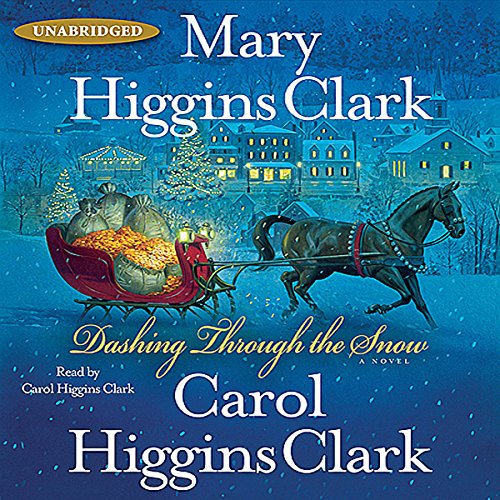 Dashing Through the Snow

In the picturesque village of Branscombe, New Hampshire, the townsfolk are all pitching in to prepare for the first (and many hope, annual) Festival of Joy. The night before the festival begins, a group of employees at the local market learn that they have won $160 million in the lottery. One of their co-workers, Duncan, decided at the last minute, on the advice of a pair of crooks masquerading as financial advisers, not to play. Then he goes missing. A second winning lottery ticket was purchased in the next town, but the winner hasn't come forward. Could Duncan have secretly bought it?

The Clarks' endearing heroes - Alvirah Meehan, the amateur sleuth, and private investigator Regan Reilly - have arrived in Branscombe for the festival. They are just the people to find out what is amiss. As they dig beneath the surface, they find that life in Branscombe is not as tranquil as it appears. So much for an old-fashioned weekend in the country.

What listeners say about Dashing Through the Snow

For the month of December my book club selected this book and it's our second book in two years by Mary Higgins Clark. Needless to say that makes it my second time reading a book by her.
The story of a group of co-workers winning the lottery right before Christmas was quite cute. The author set them in a small town were everyone knows everyone and everyone's business was very picturesque in a small town way. I love the mystery element they brought in and how the characters slowly but not too slowly started to put the pieces together.
But when I tell you this is a light read I am not joking. In my opinion there are a few too many characters in this book for how light it is. It seemed like a few of them could have been left out and it would not have effected the storyline at all.
I am not a big readers of this series and I found it just ok as a stand alone. Their were a few mentions of things that happened in another book but overall you could get in and out of it without knowing all the back story.
The narrator and co-author Carol Higgins Clark did a good job of reading her work. I know that sounds strange but I am not a fan of authors reading their own work. Most of them don't act the part and just read the words. For me the better the acting in an audiobook the better the story.
Overall, this was a perfect holiday book and I am happy it was light-hearted.

Another great book by Mary Higgins Clark. I read it (listen) every year while making cookies.
Merry Christmas to all.

Really enjoyed the story line. The concept of equally sharing, consideration of fairness as the right thing 2 do.

This was way too short. The story wasn't terrible, but it lacked the usual suspense and complicated twists that usually inhabit these two author's books. The ending was wrapped up quickly and the character's didn't really give much to be invested in.

Rather predictable. No surprises. Carol Higgins Clark should get someone else to read. It would make a nice Hallmark Christmas movie

Enjoyed every book by MHC and her daughter Carol. One of my favorite authors. They keep it clean and no gore. Bless God. I can’t stand some of those sickening mystery writers and their sick plots. I know MHC is no longer living. I’m hoping to find another author with her skills and integrity, and decency. Any suggestions

Not a dull moment!
Co workers win the lottery! How does this begin in Mystery Murder jewels & intrigue? Follow the chain of events that unravel a sinister plot that aims to destroy young romantic love.
Very entertaining