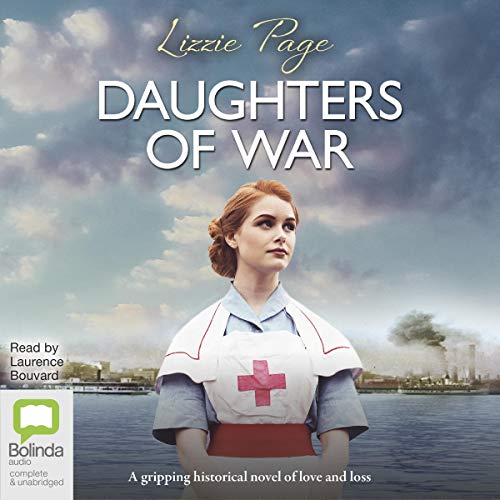 Written by: Lizzi Page
Narrated by: Laurence Bouvard
Try for $0.00

A gripping wartime drama of love and loss, perfect for fans of Soraya M. Lane, Daughters of the Night Sky and Kathryn Hughes.

As a teenager in Chicago, May always dreamed of travelling the world. So when she falls in love with George Turner, she can’t wait to return to London as his wife. Two beautiful daughters follow, but George isn’t the husband he promised to be. Ten years on, May is wondering if she’s made a terrible mistake.

The Great War has been declared in Europe, and all around, brave young men are being called up to serve. George, banned from conscription himself, has taken to the bottle, and May suspects he’s seeing other women, too. He even sends her beloved daughters away to school. She misses them terribly every day.

Then May meets veteran nurse Elsie, who persuades May to join the war effort. May knows nothing of nursing - it will be difficult, dangerous work, but her heart is telling her it’s the right thing to do and the only way to carve out a life for herself and her daughters away from George.

But when George does the unthinkable, May’s children are put at risk. Miles away on the front line and unable to reach them, will May be reunited with her little girls before it’s too late?

What listeners say about Daughters of War

As a mother I really enjoyed the conflict, and as a lover of history I loved the story. I think it perfectly captured some of the struggles a mother goes through, and the role conflict that comes with being a working parent. I absolutely hated Goerge by the end of the book, the man can get stuffed. It was worth the read.

It was a bit cheesy for my liking. Some of the word usage was questionable & the authenticity/ accuracy of the role of women during this time-period was stretched to what I would consider unrealistic.

Trying to get through it

The first book was great and I loved the reader. That being said I purchased the second installment of the series. I am about three hours into listening and it has been truly painful. The reader is atrocious. He voice for the men actually hurts my ears and she has no clue when it comes to speaking with an English accent so its like listening to a poorly performed cartoon.

But... poor reader or not, the contents of this story are just very amateurish. Pitiful young but pure and beautiful wife, mean old fat husband. Really? Smh.
Just trying to get through this one.

I loved it!! I love all of the characters except for George of course :)