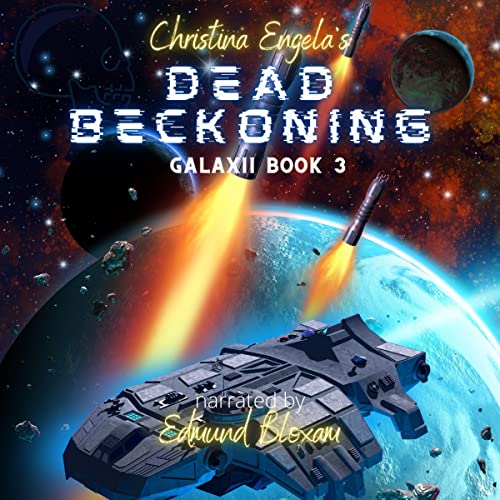 Written by: Christina Engela
Narrated by: Edmund Bloxam
Try for $0.00

The fearsome Corsairs had waged a campaign of terror against the human colonies for nearly a century, plundering and dominating the space lanes that crossed the Terran Empire at will, all the while keeping the location of their base a closely guarded secret. Then one day, quite unexpectedly, the Corsairs' luck finally ran out…

After nearly two days of fierce fighting, the Battle of Turtle Island left the skies of the Corsair world darkened with their dead. In orbit, the remnants of the once-feared Black Fleet drifted, blazing...while below, the Corsair civilization breathed its last. The Terrans had finally defeated the dreaded Corsairs.

For a while, the terror seemed to be over, but not just yet.

Not all the great Corsair figures of legend had been killed or captured - a few had slipped through the net.

Dead Beckoning is the tale of Adam, a former Corsair captain working to expunge his bloody past by doing good - starting with helping the imperial starship Antares to track down and capture one of the most powerful and feared Corsairs in legend: Sona Kilroy, a.k.a. "the Hammer".

For Mykl d'Angelo and Ripley Jones, Joe Lofflin and Dellon Bennett, Space Fleet was more than just a job, and the Antares and Mordrake more than just ships - they were home and family.

Dead Beckoning is the third title in the Galaxii Series by Christina Engela.

What listeners say about Dead Beckoning