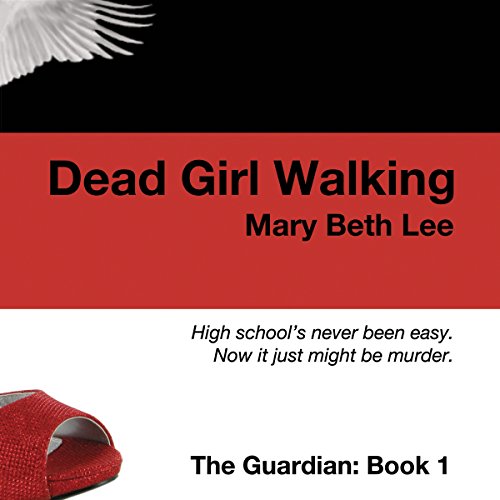 Teen Scream Movie Queen Sharlene Gallagher was the biggest thing to happen to Primrose, Texas...until she died. Now she's back as a guardian angel on a mission: solve murders before they happen. Her murder is first on the list. If she doesn't succeed, her charge will die. If she does, she'll find her way onto The Guardian.

So it's back to Primrose and Primrose High School where Sharlene works to save her charge's life and learn the ins and outs of Guardian business. Turns out that business is a little more than solving crime. It's more like saving the world.

Makeovers, murder, and mayhem. What more could a girl want?

High school's never been easy; now it just might be murder.

If you're a big YA fan you'll like this

I neither liked nor disliked this book, so saying if it was time well-spent or not is a little tricky for me. I don't feel like I wasted six hours of my life, so that's good, right? One thing about this book that I liked was that it's easy to listen to while doing other things. It's light "reading," so to speak, so even if you didn't like it you haven't spent all your energy trying to pay attention to it.

Ok. So. I am not a fan of the YA writing style (first person, present tense. I HATE present tense in books), so I would have changed all of that. That's just my personal preference; I'm sure there's tons of people out there that wouldn't be bothered by it. It was also a bit cliche in places. I would have taken out the love triangle; it added nothing to the story (also, is it some sort of requirement now that all YA novels have to have a love triangle? It's getting old). In fact, I don't think the story would have suffered at all if the character of Jon was omitted entirely, because he did absolutely nothing but sit there and look pretty. At least Andrew actually helped with the murder investigation a little.It wasn't a bad book; it IS entertaining. It's no great piece of literature, but I have no doubt it could become very popular.

Have you listened to any of Brenna Frederick’s other performances before? How does this one compare?

All I've heard are a couple samples from other books she has narrated, and she seems like a really good narrator. All her voices for the characters fit them perfectly, and she's really good at portraying the emotions in the characters' voices. I think she did an especially good job at Sharlene's voice; she brought something to the character that probably wouldn't have come across if I had read it myself. I am looking forward to listening to other books narrated by her.

I probably wouldn't pay to see it, but if someone brought the dvd over or something I would watch it out of curiosity.

Disclosure: I received a copy of this book in exchange for an honest review.

Solid entertainment, with some stumbling blocks

Dead Girl is tricky for me... it's a member of the ever growing Supernatural-YA-FemaleProtagonist-Fiction genre ... I don't immediately readily relate to some characters, and I had that with the main characters of Dead Girl Walking.

It's not a bad general plot, Addison, who can see ghosts, gets one who's more persistent than usual, because this ghost (Charlene) has got an agenda. Solve her own murder, and save "Addie" in the process.

There are some bits that feel awkward in the book tho. Despite it having been only 10 years since Charlene's death, it's presented as more like a full generation, and the characters alternately behave a little too highschool to be widely identifiable, and then too adult to be wholly believed. The book felt a bit uncertain to me, like it couldn't quite decide if it was a school story, a mystery story, a cautionary tale, or ... something else. There's a nice implicit message to never be afraid to expose abusers and molesters, but a lot of equally implicit slut-shaming that I found sad.

THAT SAID, the story moved along well, and I did find myself wanting to know what happened next. So hey... it does the job.

The reading is fine. Brenna is new to the narration world, but she does a solid job on this one, and you could feel her getting into the characters. I wasn't convinced by all of her character voices at first, but I settled in to them by the end. There are some subtle sound issues, but nothing that is so harsh it ruins the experience.

I'll give this one 3/5, I won't say you must drop everything this very second to get it, but put a credit toward it if you like YA and high school mystery stories.

Where does Dead Girl Walking rank among all the audiobooks you’ve listened to so far?

High among my favorites, I actually enjoyed this one.

What other book might you compare Dead Girl Walking to and why?

None. It's in a class by itself.

Which character – as performed by Brenna Frederick – was your favorite?

Great opening, and a fantastic audiobook.