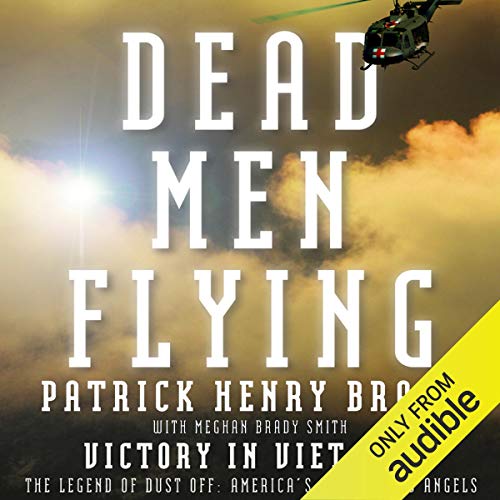 Viet Nam may be the only war we ever fought, or perhaps that was ever fought, in which the heroism of the American soldier was accompanied by humanitarianism unmatched in the annals of warfare. And the humanitarianism took place during the heat of the battle. The GI fixed as he fought, he cured and educated and built in the middle of the battle. He truly cared for, and about, those people. What other Army has ever done that? Humanitarianism was America's great victory in Viet Nam.

Spearheading the humanitarian efforts were the air ambulance operations, call-sign Dust Off, the most dangerous of all aviation operations, which rescued some one million souls in Viet Nam. Dead Men Flying is the story of Charles Kelly, the father of Dust Off, who gave his life to save Dust Off - the greatest life-saver ever. His dying words - "When I have your wounded" - set the standard for combat medicine to this day.

It is also the story of the author, Medal of Honor recipient General Patrick Brady, who learned from Charles Kelly and struggled to meet his standard. Brady led the 54th Medical Detachment as it rescued over 21,000 wounded - enemy and friendly - in 10 months, while sustaining 26 Purple Hearts. Finally, Dead Men Flying is the story of salvation in the midst of horror, courage in the face of adversity, and the miracle of faith in the heat of combat. A riveting tale from America's most decorated living soldier, this is a book that no American can afford to ignore.

doesn't get any better than Dustoff heroism

well done sir, my beloved uncle was door gunner who survived a catastrophic shoot down in Vietnam and I appreciate you sharing

A Great read! Written by a true war hero!!!!
If you want to know what it was like to be a Huey pilot in Vietnam this is the book for you!
I especially enjoyed the narrative of what life was like day to day.

Sounds like a demented robot is reading about 50 words per minute with to fast. Couldn’t get past the first paragraph it was so bad. Strongly recommend someone else, like Sean Runnette, narrate it. I really wanted to hear this book. So sad!

I enjoyed the book from start to finish. The author's first-hand knowledge of helicopter medical rescue ("Dustoff") cannot be over-emphasized. Brady's experience from almost getting discharged from the Army for not making rank to becoming commander of a dust off unit during his second tour in Viet Nam brought this to life. I knew nothing of "Dustoff" and their pilots before this book. I now believe them to be some of the most courageous heros of any Amercian military conflict. Well-written book which highlights the deeds of many unsung heros.

Thank you Mr. Brady for telling the story of these brave men who saved the lives of so many. I remember my father telling me stories about his time is Viet Nam, the good and the bad. This book sets next to the helmet worn by Lester "Budda" Shadrick. It was his hard head that saved him. I love you dad and think of you everyday.

The American soldier, unique amount all nations. This story exemplifies courage, faith, loyalty, determination, persistence, valor, brotherly love, sacrifice, the list could go on for pages. There are very few men like the American soldier. They are maligned, forgotten, mistreated, taken for granted, unsung, yet they continue to do their jobs and continue to exemplify who America is at its core even when asked to walk into the Valley of the Shadow of Death.

As a combat veteran this story was refreshing, inspiring, and healing throughout ... Amazed by God.

Charles Kelly was the man who initiated what was known as, Dust Off. The men of the 54th who flew helicopters under the auspices of Charles Kelly, were taught how to make rescue missions that no other unit ever made. Dust Off was called to fly many a mission that other units would not fly.Kelly also started having his pilots fly at night. The men of the 54th were true warriors with courage. Kelly was killed in Vietnam while flying a rescue mission. Brady continued with Dust Off and they became the best helicopter pilots in Vietnam to fly rescue missions.

Brady was a religious man and while in Vietnam, he did not lose his faith. Brady said a prayer before, during and after each mission. He would fly with his friend Garrett, who was an atheist and was always always razing Brady. This occurred quite often. However, when he was transferred, he did ask Brady if he would give him the bible he carried. Brady heard later that he had been killed while flying a mission.

There was not a mission that Brady would not fly. The pilots would fly dark most of the time when they flew at night. Kelly initiated the use of flares to help to guide him in to land. He requested that the LZ be prepared and to have one man standing. Brady was always aware of the terrain around him. When attempting to land, he would always find a way to get in and land. He would land while the area was hot. There was many a time that his plane would be shot at while landing at the rescue site or taking off from the landing site. Getting the injured out was his only priority. He would get out of the helicopter and help the grunts put the injured and at times the dead, to take out. There was also a rule that many of the men were not too happy about. The pilots were to pick up all of the injured, North Vietnames, South Vietnamese, men, women, children and even dogs, if necessary.

The weather was never a problem that Brady avoided. He would fly with his head out of the window most of the time checking out the terrain that was so crucial to a successful landing. The NV could hear all of the American's communications. The pilots would ask a grunt to throw red smoke and then just as quickly change the color. The SV had colored smoke bombs, too. Therefore, this action helped to prevent ambushes.

The 54th Dust Off pilots always flew with them a medical corp man to decrease the amount of deaths. Brady and the other pilots knew that the first hour was the most critical time in order to save the injured.

Brady and Kelly both entered the Army as grunts. They believed that knowing what the grunts were subject to when fighting, allowed them to grasp the full understanding just how important it was to get to the injured as quickly as possible.

The 54th Dust Off pilots mantra was, go for the patient first, Dead men were Angels. There was also the operational duty that the dead men be removed and flown back. There were to be no excuses, caring is the mother of Dust Off.

I encountered a problem with this memoir, there was an overload of statistics. The author could have chosen the most important statistics. However, there were so many that I suppose he considered them all important. That is why I only gave the book 3 stars.

The narrator, Jeremy Arthur, was okay. However, I believe having to read so many numbers may have interfered with his ability to read with excitement, sadness or very much emotion at all.

I do think that the Dust Off pilots have a place in history. The men definitely were heroes and exhibited quite a bit of courage. The Dust Off of the 54th lost more pilots than any other division.

Patrick Brady left Vietnam after his first tour in Vietnam without good evaluations. One of the strikes placed against him by a CO was his loyalty to the US. He had planned on making the army his career and now he wasn't too sure if he would be able to do that. However, he did receive the Medal of Honor and when he retired he was a General. I'd have to say that his CO was most assuredly wrong when he wrote his evaluation.

Good story ruined by author need to trash others

What would have made Dead Men Flying better?

This was a great and important story that was ruined for me by the authors injection of politics and religion. His hatred for atheists, politicians and the media really distracts for what is an interesting and missing story. He accuses atheists for killing his pets and blames the media for the poor treatment vets received coming home. I would have prefered to hear more of what his fellow pilots thought about the events in the book. His disrespect for "HQ types" wears thin after about an hour in - especially when you consider he retired as a major general. His complaints about how other units operate - followed by "but they had good pilots" is particularly ironic since it mirrors the frequent media treatment of military issues. His nice words about Bob Hope struck me as particularly hollow - since I knew Mr. Hope and he was not a saint (or even the Catholic at the time).

At the end of the day throughout this book I felt like I was listening to one of those Bar Stool Veterans with a "Not Fonda Jane" who who are poorly educated and have an opinions because they watch Faux News daily. The type of vet who thinks others are not entitled to an opinion because they did not serve. His mix of opinions on the military, religion and politics frankly scare me.

All that being said I would recommend listening to this book because of the story. The story matters.

What aspect of Jeremy Arthur’s performance would you have changed?

What character would you cut from Dead Men Flying?