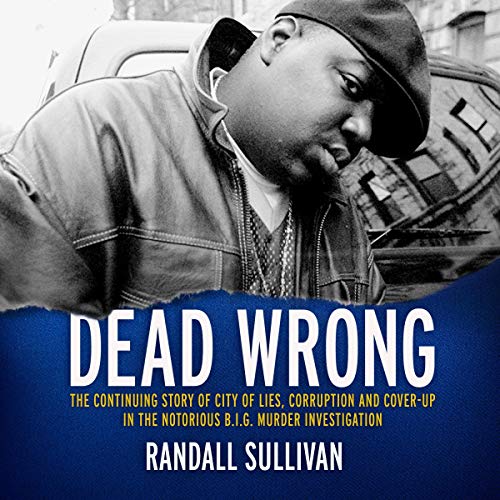 Written by: Randall Sullivan
Narrated by: Pete Cross
Try for $0.00

In 2002, acclaimed journalist Randall Sullivan’s groundbreaking book LAbyrinth ignited a firestorm with its startling disclosures about corruption in the LAPD. It told the story of Russell Poole, a highly decorated LAPD detective, who uncovered a cabal of “gangsta cops” tied to Marion “Suge” Knight’s notorious rap label, Death Row Records, and allegedly to the murders of Tupac Shakur and the Notorious B.I.G. Over 20 years later, no one has been held accountable for their killings. Now, Dead Wrong tells the story of the last 16 years in the B.I.G. investigations and uncovers the conspiracy of silence that met the estate’s wrongful death suit against the city.

Back in 2001, an eyewitness identified the man who shot Biggie as Amir Muhammad, a man who was a former LAPD officer, Death Row associate, and convicted bank robber David Mack’s college roommate and the only man to visit him in prison. Poole’s investigation was repeatedly directed away from Mack and Muhammad, and the wrongful death lawsuit sought to make the city explain why - but instead, investigators encountered a disturbing pattern of selective investigation, hidden evidence, and possible witness tampering. Exclusive interviews with the FBI’s lead investigator of the Biggie murder demonstrate a conspiracy that went to the top and that implicates some of the most powerful men in law enforcement nationally.

What listeners say about Dead Wrong

loved every minute of it definitely recommend it! if your a 2pac and biggie fan.

A courageous narrative that is willing to tell a story that our politically correct population may not be ready to hear...

very insightful. kinda sheds light on all those rumors weve been hearing all these years.