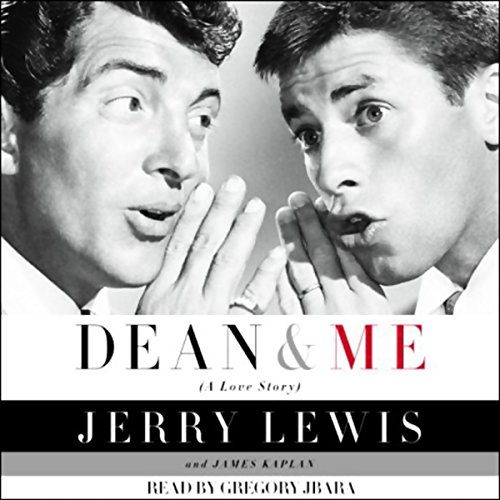 They were the unlikeliest of pairs: a handsome crooner and a skinny monkey, an Italian from Steubenville, Ohio, and a Jew from Newark, N.J. Before they teamed up, Dean Martin seemed destined for a mediocre career as a nightclub singer, and Jerry Lewis was dressing up as Carmen Miranda and miming records on stage. But the moment they got together, something clicked, something miraculous, and audiences saw it at once.

Before long, they were as big as Elvis or the Beatles would be after them, creating hysteria wherever they went and grabbing an unprecedented hold over every entertainment outlet of the era: radio, television, movies, stage shows, and nightclubs. Martin and Lewis were a national craze, an American institution. The millions (and the women) flowed in, seemingly without end, and then, on July 24, 1956, 10 years from the day when the two men joined forces, it all ended.

After that traumatic day, the two wouldn't speak again for 20 years. And while both went on to forge triumphant individual careers, Martin as a movie and television star, recording artist, and nightclub luminary (and charter member of the Rat Pack); Lewis as the groundbreaking writer, producer, director, and star of a series of hugely successful movie comedies, their parting left a hole in the national psyche, as well as in each man's heart.

In a memoir by turns moving, tragic, and hilarious, Jerry Lewis recounts with crystal clarity every step of a 50-year friendship, from the springtime, 1945 afternoon when the two vibrant young performers destined to conquer the world together met on Broadway and 54th Street, to their tragic final encounter in the 1990s, when Lewis and his wife ran into Dean Martin, a broken and haunted old man.

"Fans will be surprised and entertained by Lewis' honesty and diminished ego and bitterness." (Publishers Weekly)

What listeners say about Dean and Me

Loved these two guys!
what a team...
good audio book.
lots of information I didn't know.

I loved this book . I think both these guys were the best in the business! I didn't like the narrator"s voice though

First of all the narrirator is excellent!!! He delivers Dean Martin's voice as though Dean Martin himself were there speaking. His Jerry Lewis wasn't half bad either. I found myself being carried away back in time, by Jerry Lewis's captivating account of his and Dean's careers. He is a masterfull story teller whos vulnerability was very touching. I was left wishing there was more. I highly reccomend this audiobook for Jerry Lewis and Dean Martin fans.

You've got to listen to this!

This is one of the 3 best audio books I've ever listened to - gripping, entertaining, and full of memories. If you've ever seen a Martin/Lewis movie, or remember either of the stars on TV or film, or even just watched the MDA fundraiser - you'll laugh out loud and sometimes tear up listening to this 50-year love story by Jerry Lewis. The narrator Stephen Hoye is phenomenal - his mimicry of Jerry's Jersey and "jerk" voicing, plus Dean Martin's soft mid-western/Italian, makes you feel like they are sitting right beside you. Hoye is so perfect in the reading I came back to Audible to look him up - I was convinced that Mr. Lewis must have picked the reader from the professional acting community, but Hoye has numerous books to his credit and I intend to seek out his readings (which I've never felt compelled to do before). The pacing is superb - there are no boring parts - you're engaged every minute. Mostly, this audiobook is a walk down memory lane - not only Dean and Jerry, but Sinatra and the Rat Pack, June Allyson, Marilyn Monroe, and many many more. Mr. Lewis seems to hold nothing back - including his own addiction to prescription painkillers, the tragedy of his son Gary and Dean Martin's son Dino, divorces, the acrimony of the act breaking up, the tearful reunions years later. Mr. Lewis is painfully honest, yet forgiving and compassionate in describing himself and all the others - giving us an open, often hilarious and sometimes teary behind-the scenes of two of the greatest names in comedy entertainment of our time. If you are younger than 40, you may not recognize many of the names, but that is a minor matter - you'll love this read anyway. Buy this audiobook. (I note there is an abridged version, but don't know why and haven't heard it. The unabridged is just over 8 hours to about 5 for the abridged. Get this one.)

The story of Dean Martin and Jerry Lewis, as only Jerry Lewis could tell it.

Along with the great anecdotes, and the meteoric rise and fall of their partnership and what made it work so well for 10 years, Jerry tells about Dino's real unrecognized comic genius, long overlooked by the critics until Dino and Jer went solo. It takes a real genius to play the straight man, and Dino was every bit as good as George Burns in that regard.

A must listen for fans of classic comedians and especially Martin & Lewis.

A different sort of love story

This really is a love story. Jerry Lewis speaks reverently and with great affection for his long time partner and good friend Dean Martin. From their humble beginnings to the height of their popularity in the 1950's to the tragic break ten years after they teamed up, Lewis hits all the highs and lows with vivid portraits, humerous anecdotes and most importantly a touching and loving portrait of the complex man that was Dean Martin. While Lewis is not at all modest (he seems to take credit for most of their successes), he still cops to his own demons and the effect they had on the partnership.It is so emotional at times this listener found herself in tears listening to the loss and pain the break brought both stars. Peppered with portraits of famous stars, mobsters and studio bossess, and narrated with an uncanny similarity to Lewis' voice,This audiobook is among my favorites, and it is a timely and lovely tribute to the great Dino.

Please..get the unabridged version, if only for the narrator, Stephen Hoye-he is magnificent and brings the characters to life, especially Jerry. Now that I've purchased and listened,curiosity led me back to the narrator sample of the abridged vesion. Suffice to say, I made the correct choice.

Fabulous review of a Golden Age

I thoroughly enjoyed this book. What a golden time - 1946-1956 - and what a pair of performers. The book content was very interesting and the reader's voice capabilities added to the enjoyment. He came close to sounding like Jerry and Dean when he read their parts. I highly recommend the book to almost anyone but the strong language made it impossible for me to recommend it to my 89 year old mother.

I loved this book! I have always been a fan of the Lewis and Martin team but this book gave them heart and soul. Jerry Lewis does not shy away from stating his love for Dean and there was nothing phony about his approach to their story. I've listened to it several times now and still think it is great. The narrator uses his voice beautifully to reflect accents and emotions throughout the book. Many thumbs up!

Enjoyed this book very much, more about the story of two friends that became too successful and forgot how they got there. The history and show biz names made this a very enjoyable and interesting listening experience.

Whether you just love Dean Martin's songs, have been captured by his persona or just want to know more about Dean and Jerry, this is a must hear. The book is very well done and provides information on Jerry and Dean's relationship from a suprising prespective. You will laugh, you will be surprised and you will cry. It well worth reading!

After checking out reviews and comments, I decided on the unabridged version because the fellow that narrates, Stephen Hoye, does a wonderful job of catching Jerry & Dean's personality. This audio book is definitely a Jerry Lewis driven vehicle. He, with the help of James Kaplan, wrote this in 2005, well after Dean's death, so obviously, Martins not around to confirm nor deny anything said here but I have no doubt that this is the way Jerry remembers their time together.
Lewis mainly covers the 10 years they were partners, the families, Sinatra, Sammy Davis Jr, The Rat Pack, Mafia, Vegas, The Cabana and other major clubs of the time, the unavoidable Martin & Lewis break up, reunion on the 1976 Telethon that Frank Sinatra orchestrated without Jerry's knowledge, Dean's son's death and eventually the death of Dean himself. Much more then I'm willing to take the time to type.
I can sense Jerry's extreme love for Dean throughout, his bitterness of how not only the partnership but also the friendship dissolved, his jealousy of Dean's wife and how, even though I don't think the author himself sees it this way but I sure do, how toward the end of the partnership Dean must have felt Jerry to be a big pain in his you know what. My own personal thought is that Lewis smothered the guy.
Listen and let me know if you feel the same way.
Titled correctly, this is what I believe to be a true love story between these fellows. Jerry Lewis loved Dean Martin. PERIOD!, and if a fan, you'll love this audio book.

What an interesting and wonderfully done memoir. Some audiobooks, I find myself drifting away, but not this one. This one had my undivided attention throughout the whole book. Well worth listening to.