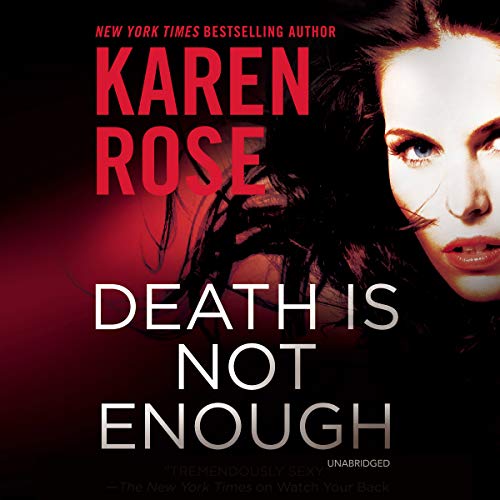 Death Is Not Enough

Written by: Karen Rose
Narrated by: Marguerite Gavin
Try for $0.00

The past comes back to haunt a high-profile defense attorney in the newest audiobook in the Baltimore series from The New York Times best-selling author of Monster in the Closet.

In his work as a defense attorney in Baltimore, Thorne has always been noble to a fault - specializing in helping young people in trouble in an attempt to atone for those he couldn't save when he himself was younger. He plays the part of the bachelor well but secretly holds a flame for his best friend and business partner, Gwyn Weaver, a woman struggling to overcome her own demons. After four years, he thinks he might finally be ready to confess his feelings, come what may.

But his plans are derailed when he wakes up in bed with a dead woman, with no recollection of how he got there. Whoever is trying to frame Thorne is about to lead him down the rabbit hole of his past, something he thought he outran long ago - which means Thorne must figure out who's been keeping track of him, how much they know, and how far they'll go to bring him down.

What listeners say about Death Is Not Enough

Not as good as many others I've read from Ms. Rose

I was somewhat disappointed in this novel. Having read mostly ALL of Karen Rose's novels, I am far from being a prude, but I was quite taken aback as to how much 'potty mouth' flowed in this book . Not only was the "F" word used constantly, and by ALL the characters, but every time came in doses of two or three at a time. Never did I believe this added to the strength of the story, making me wonder if she had been instructed to turn in a minimum amount of words to her publisher, thus adding this word so often?

I was also confused as to 'why?' the main character was always referred to by his surname, regardless as to who was speaking to him, or in what situation. I find it hard to believe that 'everyone' would talk to someone in this way, especially in intimate circumstances. (Almost chuckled as I pictured myself talking to my husband this way, all day/every day.) This wasn't the case at the very beginning of the book, when laying out the background, but once in 'present day', all of a sudden this changed. It took me awhile to actually figure out 'who' she was referring to, and again, have no idea as to the reason she chose to direct Thomas as "Thorn' throughout the story. I was forever trying to piece this one together. :(

I do enjoy Karen's writing style, but think I will take a break from her novels before giving myself into another of her books. I only hope, once I do, that she has got rid of her anger - or? - and will revert back to good, crime mystery dramas, and leave the bad language on the floor with the other trash, while doing her proofreading. With all the books she has written/sold, she must realize that trying a different/crass writing style is not necessary. She has already established a loyal following; I am hoping to be one that continues in that group. Will have to see what future novel style she uses before deciding on that one..

Another winner from Karen Rose...

This book is part of Rose's Baltimore series. It begins with attorney Thomas Thorne being found in bed with a murdered woman, both on high quantities of drugs and the woman carved up. Thorne, who has been accused and tried for murder in the past but was acquitted now has a feeling of deja vu. He can't help but think that this has something to do with that other case from his long ago high school days.
This is a lengthy book with many characters. Rose's books generally introduce a new character and will carry them forward to the next book so you now have a whole cast of characters to keep track of. Everyone if off working on the case and doing something different. These books are all stand alone however, I would suggest listening to these books in order so you will understand characters and relationships.
I have read or listened to everything by Karen Rose and love her writing style. Her books are classified as romantic mysteries. I am not particularly interested in romance and will fast forward through the love scenes, these take up maybe 1% of the book overall and you are left with an outstanding mystery.
Marguerite Gavin does an excellent job narrating.
HIGHLY RECOMMENDED.
If you found this review helpful please indicate so.
Thank You.

Lots of suspense, lots of background, and (very important) good narrator. The only complaint I would have is language. I'm not a prude. I've been known to have a potty mouth. But I think Karen Rose, and this is unusual for her, used foul language by every character in the book...I'd call it gratuitous cursing...when it added nothing. Even the women. It's not necessary that it be so constant.

I love Karen rose, so excited for this latest one!

I love these Karen rose series and the characters she develops. this was true to her writing, so emotional and heartfelt. the story was so involved and sometimes confusing you can't miss a second!

A game of cat & mouse

-Whodunit at its best.
-Love story, murder& mayhem - doesn't get any better.
-Some storylines are wrapped in this book and HEAs all around.
-I love the Baltimore world, the cast of characters is intriguing, well defined and our heroes are strong.
-Thorne & Gwen are in effect the gentle giant and the teeny fairy , it works.
-Romance & suspense indeed.

Now I continue the Cincinnati series. It is my 2nd read of Karen Rose's books and she gives me chills.The bad guys are really really bad. Some are narcissist or power hungry or deluded but all have 1 thing in common they scare the beejezus out of me.
Well done.

The narrator is spectacular she brings these books to life. I highly recommend the audiobooks for a fuller immersion into this world.

We’re back in Baltimore and this time the focus is on Thomas Thorne and Gwyn Weaver. You may recall that they are both Lucy Fitzpatrick’s partners in Sheidalin, the nightclub they jointly own. He’s a defense attorney and she’s the club manager. It’s been four years since the attacks on Lucy and Gwyn and Thorne is finally gathering up the courage to express his true feelings to Gwyn. Before that happens, she discovers him unconscious in his bed with another woman. The problem is the woman is dead and her blood is all over him. His last memory doesn’t include her at all.

As with most of the stories in this series, the answers aren’t made clear initially but this one is a bit different in that we get the villain’s point of view early on though not the identity. I love this approach as it keeps the mystery going but we don’t quite have all the information. Just about every earlier character from the previous books set in Baltimore have active roles here, which I really like as we get updates on what’s going on in their lives.

The person behind Thorne’s problems is beyond diabolical and the attacks are brutal. I just wanted the team to solve this thing but it wasn’t easy. Entanglements from Thorne’s childhood are a major factor so it got gnarly. The focus wasn’t entirely on Thorne as the prickly Gwyn got equal page time. I really liked getting to know her and her backstory. The romance didn’t take a backseat but the mystery certainly was what captivated me. Be prepared for the usual high body count as this wasn’t pretty. It’s a huge cast of characters with intriguing secondary storylines. Marguerite Gavin narrated this one and she delivered a fine performance, especially with so many to give distinctive voices. I continue to love listening to this series and being back here, no matter what city!

While this book can stand alone pretty well, the better experience is to read it in order. Also, there are spoilers from the earlier Baltimore book so if you plan to go back and start from the beginning, which I highly recommend, don’t begin here. Quite frankly, there are connections throughout the entire 21 books.

Good story, it would have been better without the over use of fowl mouths, professional people don't use the f word nearly as much.

I can’t say enough how much I really enjoy listening to these books. Book after book connects together and I just love it. This is the 15th book of Karen Rose’s that I’ve listened to in about 4 months thanks

The book was good overall. The book kept missing, I don't know if it was a download problem or what. It is the only one of the books that did that so far.

This Gets Added to My Favorites

This was great, and it “almost” earned a 5-star rating from me overall. But I deducted one full star because, even though I loved Thorne and was thrilled that he finally admitted his feelings out loud to Gwen, I didn’t feel their “connection” like I have with so many other characters from previous books. Outside of this small annoyance, I loved the story, loved that many of my favorite characters from previous books were there to help clear Thorne. Even though the villains were not as bad as depicted in previous books, this did not deter my overall enjoyment. Kudos to you Ms. Rose. Even in book 21, you’re still bringing it. Keep it up!

This gets added to my favorites shelf!