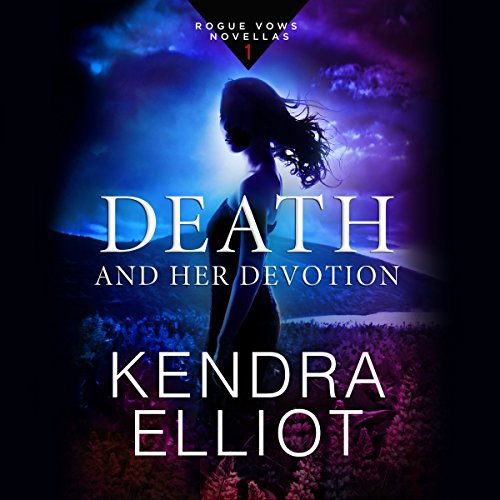 Death and Her Devotion

In the first Rogue Vows novella, Zane and Stevie are about to get an unexpected wedding present...and it's a deadly one.

It should be the happiest weekend of Officer Stevie Taylor's life. She's finally going to marry Police Chief Zane Duncan and live happily ever after in Solitude, Oregon. But all wedding plans grind to a halt when a dead body is found at a nearby campground. A vacationing A-list TV actor has been murdered...and all hell is about to break loose.

When it comes to a celebrity murder, everyone has a motive - and everyone wants a piece of the action. As news media and paparazzi swarm their sleepy town, Stevie and Zane must dig deep to untangle a web of lies, dirty little secrets, and betrayals - and uncover the killer. But the closer they get to the truth, the deadlier their investigation becomes. And if they don't act quickly, 'Til death do us part may come sooner than they thought.

What listeners say about Death and Her Devotion

I absolutely love Kendra Elliot’s novella, and this was no exception. There always so much going on with such a short story.

In this one Zane and Stevie( Stephanie, really) are trying to solve the murder of the famous actor Chase Ryan while they are also trying to finish their wedding arrangements in a few days, and trying to solve 2 fires as the time draws near.

And it’s always nice to see Stevie’s family, Patsy, Carly and Seth, Bruce, James, Brianna, etc. It’s nice to catch up with all of them. Then with Chase’s (murder victim) friends, Josh, Toby and Spider, and all their secrets. I liked Jenny and Brandon, again with the secrets. Aiden Tierney, Chase’s agent, was an ASS, I couldn’t stand him.

Anyway, it really was a great novella.

There was NO sex whatsoever, and the F-bomb was used 5 times.

As to the narration: Perfect, perfect, perfect! Kate Rudd does terrific voices for the men and she has awesome emotions when she reads.

I enjoyed listening to this book. It had so much excitement and adventure. The characters where great and the storyline was very great to read. Thanks

The Rogue series is great and this novella did not disappoint. Stevie and Zane have to solve the murder of a Hollywood actor in their small town...just before their wedding! Great cast of characters, with a surprising ending. On to the next book!

This is the first book I’ve read of the “Rogue River” series. I alternated between Kindle and Audible, but I had to really pay attention to all the names that came whizzing at me in the first few chapters, which were better in Kindle. I’m sure the characters were underdeveloped to me, because I’m new to the series.

I listened to most of this book, finding the mystery decent, but the storyline was simple, and the investigation on the slipshod side, probably due to this being a skinny novella. The romance was too treacly for me, so I went to Kindle and skimmed through the treacle.

Kate Rudd’s narration helped elevate my rating, and even she couldn’t salvage the half-finished ending.

Excellent story and excellent narration. My only complaint is that the story ended so soon! Kendra Elliot is a wonderful weaver of stories.

I love the characters in this series. This story has suspense and romance with the flavor of small town life. The narration is very good. Very enjoyable story and narration!

I am not in the target audience, but...

...I did enjoy this murder mystery and romance novella. I also like to sometimes listen to a feel good novella that ends exactly right. Any fan of Kendra Elliot will enjoy this book. Narration is terrific.

This was a good slightly suspenseful romance. This was a clean romance but it kind of dragged in some places. I personally enjoy Kendrick Elliot’s stories and will definitely read another one of hers.

Another great story, I really enjoy the action and suspense in these books. Very thrilling and intriguing story. The narrator is absolutely amazing really draws you in. I definitely recommend this book.

fine as wine..great read. one of my favorites. she's a good author. good nite all and god bless.