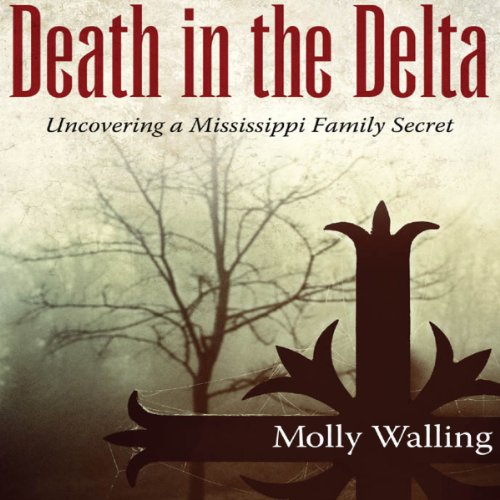 Death in the Delta

Growing up, Molly Walling could not fathom the source of the dark and intense discomfort in her family home. Then, in 2006, she discovered her father's complicity in the murder of two Black men on December 12, 1946, in Anguilla, deep in the Mississippi Delta.

Death in the Delta tells the story of one woman's search for the truth behind a closely held, 60-year-old family secret. Though the author's mother and father decided that they would protect their three children from that past, its effect was profound. When the story of a fatal shoot-out surfaced, apprehension turned into a devouring need to know.

Each of Walling's trips from North Carolina to the Delta brought unsettling and unexpected clues. After a hearing before an all-White grand jury, her father's case was not prosecuted. Indeed, it appeared as if the incident never occurred, and he resumed his life as a small-town newspaper editor. Yet family members of one of the victims tell her their stories. A 93-year-old Black historian and witness gives context and advice.

A county attorney suggests her family's history of commingling with Black women was at the heart of the deadly confrontation. Firsthand, the author recognizes how privilege, entitlement, and racial bias in a wealthy, landed Southern family resulted in a deadly abuse of power, followed by a stifling, decades-long cover up.

Death in the Delta is a deeply personal account of a quest to confront a terrible legacy. Against the advice and warnings of family, Walling exposes her father's guilty agency in the deaths of Simon Toombs and David Jones. She also exposes his gift as a writer and creative thinker. The author, grappling with wrenching issues of family and honor, was long conflicted about making this story public. But her mission became one of hope that confronting the truth might somehow move others toward healing and reconciliation.

What listeners say about Death in the Delta

Compelling story told from the heart.

Yes. It's a topical and relevant story especially with the current state of racial relations we have in our country today. I became engrossed in the interaction between Molly and her family members.

The insight from a woman's point of view of growing up in the South in the 60's.

Which character – as performed by Angela L. Rice – was your favorite?

Living Southern: "The way it was back back then.

What did you love best about Death in the Delta?

I loved a few things: The history, the way folks lived in The South back then: the style of dress, etiquette, hierarchy, juke joints, food and the generosity, too. The author includes scenic and social details. She walks the listener through the story and makes me feel as though I am right there with her, tirelessly trying to uncover the facts and witness accounts surrounding her surprise discovery: that the murder of two black men in 1946 may have been carried out by her white, alcoholic father before she was born. She could have chosen to dismiss the entire incident - most people would have - but instead she chose to delve deep into the dark family secret.

What was one of the most memorable moments of Death in the Delta?

Besides the author's extensive research surrounding the 1946 murders in Anguilla, Mississippi, she also met and became friends with some of the family members of the murder victims.

She also describes the tragedy of her father's alcoholism, what propelled it and where that lifestyle ultimately led him.

She gets involved in community charity work to learn about people with drug addictions to understand more about her father and the demons he may have faced but never sought help or spoke about. I thought the author's decision to spend the night in her late father's apartment while she was cleaning out his apartment, discovering important documents and mementos was quite brave. She stayed on task even though it was very difficult for her to do.

What does Angela L. Rice bring to the story that you wouldn’t experience if you just read the book?

The narrator has a pleasant, easy to listen to voice and adds the right kind of tone and emphasis where the story requires.

Learning about her father's service to our country while in the Army was moving. He flew fifty-two missions in a B-17 from Africa to Italy during WWII. He also had great writing ability and took the time to write back home, describing his days in carefully worded detail without including the graphic nature of war. He also poured his heart out about how much he missed and loved his family, which I found moving.

It should be a particularly interesting book for those born and raised in The South (like me) or for those interested in becoming Southerners.

Would you try another book from Molly Walling and/or Angela L. Rice?

No feeling whatsoever!! VERY robotic in speaking. Punctuation was awful and absolutely NO feel for the southern dialect which is SUPER important in this particular book. The narrator is SO bad that it is hard to stay focused on the actual story line.

If I were the author of this book I would be furious with the narrator for ruining my writing.

I'm sure it's a good story, but I think it's read by a computer. You can't follow it.

This book was only of interest to me because I am familiar with the area and some of the characters. Otherwise, I'm sure I would not have finished it. I felt like the author was doing more psychoanalysis of herself and her family, than of telling the story. But, the worst part, by far, was the narrator!! She sounded more robotic than human. I just really can't recommend this book.

Performance felt as though it was being read ....

Narration was not a good performance. It felt as though it was being read from the newspaper. No animation, expression, or emphasis