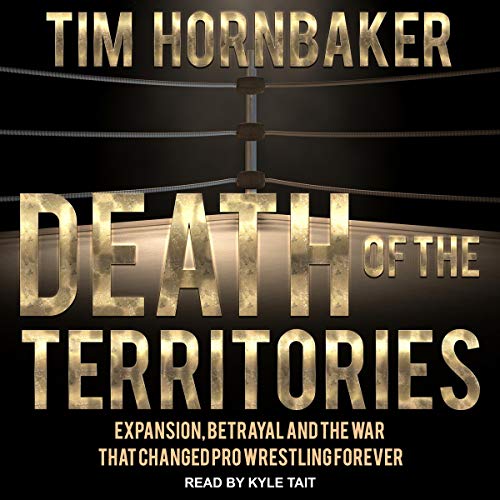 Death of the Territories

Written by: Tim Hornbaker
Narrated by: Kyle Tait
Try for $0.00

For decades, distinct professional wrestling territories thrived across North America. Each regionally based promotion operated individually and offered a brand of localized wrestling that greatly appealed to area fans. Promoters routinely coordinated with associates in surrounding regions, and the cooperation displayed by members of the National Wrestling Alliance made it easy for wrestlers to traverse the landscape with the utmost freedom.

Dozens of territories flourished between the 1950s and late '70s. But by the early 1980s, the growth of cable television had put new outside pressures on promoters. An enterprising third-generation entrepreneur who believed cable was his opportunity to take his promotion national soon capitalized on the situation.

A host of novel ideas and the will to take chances gave Vincent Kennedy McMahon an incredible advantage. McMahon waged war on the territories and raided the NWA and AWA of their top talent. By creating WrestleMania, jumping into the pay-per-view field, and expanding across North America, McMahon changed professional wrestling forever.

What listeners say about Death of the Territories

As a Wrestling fan for 30 years I was very interested in listening to this audiobook. It wasn't exactly what I was hoping for but I still found it worthwhile.

The truth is that I already knew a lot of the information contained in the book. However, it did fill in a few gaps in my own knowledge of the time period. The book doesn't go as in depth as it could on any one territory in particular, so in that sense it could be considered a good place to start your research but for a fuller picture you would want to branch out from here. However, if you're a wrestling novice just looking for an overview of major events and the key players from this time period, this book will easily satisfy.

As for the listening experience, I found it enjoyable. I got through the book in about a day and was never bored by the performance. I even laughed out loud a couple of times which is not something I do frequently. One reviewer described the performance as monotone but I would call it steady. The fact is that the text itself is not particularly filled with emotion, no one subject is really lingered on for too long. Even in the case of a wrestler's death, the circumstances surrounding it are laid out but not a lot of time is spent dealing with the aftermath.

Whether you will personally enjoy this book will depend largely on what you are expecting. If you are hoping for a good overview of major events and key figures from the territory era of professional wrestling then you will come away satisfied. If you are looking for a starting point from which to do more research than you could do much worse. If you're looking for something that reads more like a tabloid that is full of wrestling style promos on Vince McMahon then you probably won't be so entertained.

Even though most wrestling fans of any age know the end of the story, Tim Hornbaker does a great job given the readers excellent detail into the atmosphere of the territories in the pre-cable television pro wrestling landscape. This is a must-have book for fans. I enjoyed it greatly.

Awesome job by the narrator. Great pronunciation and pace of reading. I recommend this audiobook to any wrestling fan.

A ruthless business it became

I heard many things over the years, but this book puts it in perspective how, when, and where. Good read!!!

I really enjoy learning more about old school pro wrestling, er, rasslin and this has that! My knowledge of wrestling (for what it is) is mostly post-1984 and WWF's rock and wrestling, so hearing old NWA stories and about the territory days is fascinating to me. There were a few times where I was like, "really?" and in some good ways, some bad. Like talking about all the bad taste angles done in World Class by the Von Erichs and I didn't remember the Fritz-fake heart attack angle being mentioned at all. It was fun listening to 1983 in particular and how Vince was setting the stage for his national take over. Anyway, if you like old rassling stories, this is for you!

Great listen for the history of the territories

don't want to come up with headline

It paints WWF as this huge force taking over as early as 83 or 84. Sorry, but TV production and everything was ahead of the WWF in Dallas at that time. From 82 or 83 til like 86 WCCW in Dallas was way more popular. and until late 80's the WWF was only big in the northeast. The south still preferred Crocket, Jarret, and Bill Watts territories over WWF

A really informative book about the old wrestling territories and how end it. It was really good.

Take it for what it is

This is a dry, factual cataloguing of how the WWF outmaneuvered other promotions in the early '80s. What television affiliates and arenas Vince signed deals with, what employees he signed, what services he provided. You're not going to find humanizing biographical details or vividly recounted conversations here. Your vantage point is top-down, from the outside looking in. But in all likelihood a tiny fraction of fans today could provide more than a sentence or two's explanation of exactly how the WWF broke free from the territorial system, or what WWF programming looked like prior to the Wrestlemania era. If you're ready to take notes on the subject, this book is ready to lecture.

In depth and informative, didn't love the voice

This book is truly deep, almost too deep at times, into the strange and chaotic world of territory wrestling and the rise of WWF and WCW. The length is just about right and while at times it reads like a book report, it kept me interested. Truly, the amount of research that went into this is staggering.

Unfortunately, the vocal performance leaves a little to be desired. Nearly every sentence is ended like the sentence carries too much weight. It's hard to describe, but it is read like every sentence should blow you away rather than just presenting the info. I found this pretty wearing after a few hours.