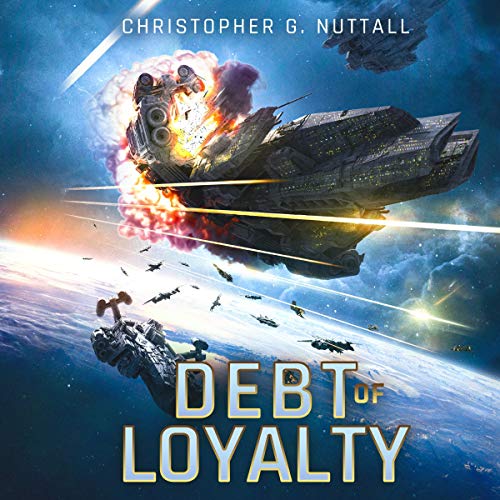 An uncivil war in space sends a planet spinning out of control in the next thrilling Kat Falcone novel by bestselling author Christopher G. Nuttall.

The Commonwealth has fractured, its interstellar order breaking down into civil war. On one side is Hadrian, the outlaw king of Tyre, driven from his homeworld and forced into a fragile alliance with the colony worlds; on the other sits a parliament determined to restrain him at all costs. The time for talk is over. The matter can be settled only by war.

Loyal to the king, Admiral Kat Falcone leads her fleets into battle, joined by allies with motives of their own. But her friend and former comrade Commodore William McElney has chosen to join the Houses of Parliament. They now find themselves on opposing sides of a civil war, trapped into waging a series of battles that neither wants to fight but that they dare not lose. And as shadows and secrets come to light, they may find themselves watching helplessly as the war tears the universe they fought for apart.

What listeners say about Debt of Loyalty

Nuttall is like a Junior Officer who thinks his idea is clever by using this line OVER AND OVER to describe the king to the point of madness. Also these experienced officer some how are falling for basic traps, ones they themselves used which is incredibly stupid. This book was a bit disappointing and Kat is still acting like a daddy's girl willing to do anything for approval from authority now that her dad is gone, even get thrown under the bus and just take it. its frustratingly pathetic.

Narrator couldn't save this one

Where to even start? This was easily the worst book I've listened to. The narrator did her best but there's only so much you can do with a bad script.

I don't want to give any spoilers but the writer tried too desperately to keep to a singular villain for this series. Instead of attempting to portray both sides as absolutely morally bankrupt everything is on one side being bad and the other having some problems but it's totally ok because it's just debt slavery not actual slavery! Look at what this master mind did and got away with! Look at all this evidence!

I recommend the first series, but not the second. I will not be buying the third book.

The hell of it is the writing is getting better...

...but the characters still use all the same phrases. The author is good at world building and setting up interesting stories, but he reuses the same phrases over and over. In his own words, "that only happens in bad movies!" With a good editor and more differentiated characters, this author has the potential for 5 star content.

The story was okay, but the book focused more on the political points. I would have liked more action .

I am enjoying this Audible book. Christopher Nutall has another reason to be proud! It's a good story told by a good narrator. Thank you for the pleasure of hearing it told!

The high point as Kat and William fight each other

The civil war is well and truly on and Kat finds early advantage for the forces of the King. However, those victories bring William to the attention of Noble Houses and the Legislature. Before long it is William and against Kat and both know each other far to well. Stalemate ensues as neither side is able to find an advantage and initial supplies and ships are expended and other options become necessary.

This was way more interesting

Usually book 1 is awesome and then book 2 onwards things slow down a bit. In this case book 2 was way more interesting. It showed the evolution of the civil war and kept the place interesting enough to make it enjoyable