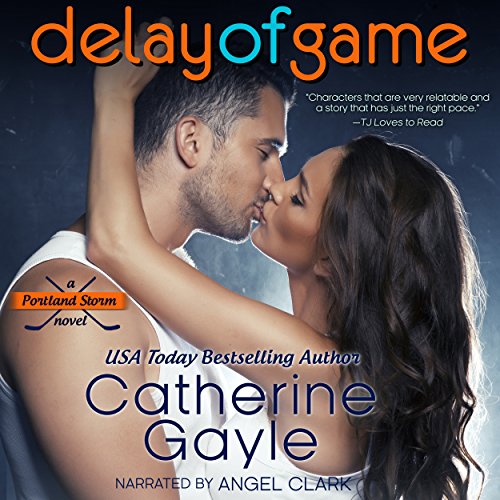 With her father's health in question, Sara Thomas is focused on reducing his anxiety. That's no small feat, considering his high-stress job, not to mention her own distractions. Everyone knows Sara's single; no one knows she's pregnant. There's never a good time to unexpectedly get knocked up, but now is definitely not it. Regardless, she doesn't want anyone to know - especially not her father - until she has a game plan in place. But when Jonny, one of her father's players, seeks vigilante justice on the ice, everything gets tossed out the window.

Cam Johnson's role as a fourth-line winger with the NHL's Portland Storm entails more than scoring goals. He has to ensure other teams don't take liberties with the Storm's star players. The way Cam sees it, that's the most important aspect of his job. His teammates call him Jonny; opposing fans call him a goon; the media calls him an enforcer. The title's unimportant. Cam will always fight for his team - even if he has to break the rules. He's used to taking penalties, but he never meant for anyone else to suffer from his choices.

When Cam's actions cause Sara's worst fears to be realized, he blames himself. He's screwed everything up; now he has to set things right. Mutual attraction leads to lust, and suddenly Cam is taking penalties at every turn... at least where Sara is concerned. He's got to think on his feet, or he'll end up with a Delay of Game.

What listeners say about Delay of Game

First thing, this is the first book that I listened to in the series and my first story by the author. I was a little worried that I was going to be confused about characters since this book isn’t the first in the series, but luckily that was not a problem.
Cam was an extremely likable character. I think that the author very good job about leading us into his head without bombarding us with too much inner dialogue.
But Sara, whiny Sara, with way too much for me. She was extremely unlikable and seemed way younger, almost like a teenager. Which made me really nervous about the faith of her unborn child.
Cam and Sara as a couple made no sense to me. I feel like it was easy to understand why Sara would be attracted to Cam, but the same cannot be said for why Cam was attracted to Sara (other than physically, I mean.) I also don’t believe that there’s really emotions behind this pairing. Cam was into Sara from the start, and as cute and sweet as that is, it made no sense since Sara was so unlikeable.
Overall, the story was okay but I will not be reading anymore books in the series.
Also, this book was given to me free at my request and I provided this voluntary and HONEST review.

Gayle develops her stories around real issues, creating authentic characters. She gradually builds delicious chemistry between the main characters, incorporates multi-dimensional secondary characters, and wraps it all up with sensational hockey. Add in quality narration and it's a win.

I recommend reading the series in order. Books reference characters and plot lines from previous books. You don't want to miss any of it!

Angel Clark is the most non emotional narrator I have ever heard. Sarah, is an awful awful person. No redeeming qualities for this character. Every chapter she was in made my stomach clench. Done with this author and narrator.

The central characters hooked me within 10 minutes of listening. The narrator is very solid and paces the book. Well. The author brings the world of making a living in pro sports to life very convincingly. I have this series on must buy list.

What other book might you compare Delay of Game to and why?

Ahh! The narrator took a big tall stoic character and gave him the voice of a short balding newscaster which totally wrecked the romance for me. In addition, she mispronounced the name of the Canucks hockey team which was mentioned several times throughout the book. Canucks rhymes with ducks not dukes!! Even if you aren't from Vancouver it will hurt your ears.

Love the series, try another narrator. Thanks