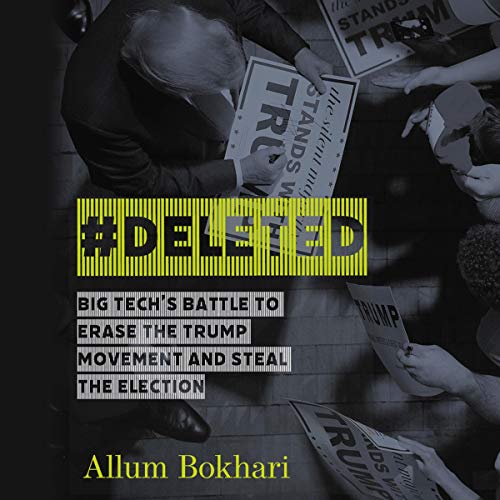 Uncover the hidden systems created by the most powerful tech companies in the world that are determined to stop Donald Trump.

Journalist Allum Bokhari has spent four years investigating the tech giants that dominate the Internet: Google, Facebook, YouTube, Twitter. He has discovered a dark plot to seize control of the flow of information, and utilize that power to its full extent - to censor, manipulate, and ultimately sway the outcome of democratic elections. His network of whistleblowers inside Google, Facebook, and other companies explain how the tech giants now see themselves as "good censors", benevolent commissars controlling the information we receive to "protect" us from "dangerous" speech.

They reveal secret methods to covertly manipulate online information without us ever being aware of it, explaining how tech companies can use big data to target undecided voters. They lift the lid on a plot four years in the making - a plot to use the power of technology to stop Donald Trump's reelection.

What listeners say about #Deleted

Allum Bokhari underestimated both, Trump and the democrat party, in how popular Trump remained and how deep the swamp ran.

Easy to follow, chronological examination of Big Tech's destructive footprint on freedom and privacy - using its own actions, non-actions, and admissions as examples.

Bokhari utilizes a concise breakdown of categories in the chapters and their relative subsections within for easy digestion; and his well-paced, well-articulated, eloquent British narration speaks easy on the ears - making it a superb supplementation for typical background noise when working, exercising, or performing tasks; though unlikely to aid in sleep as its quick pace and entertaining (and often times infuriatng) facts will keep listeners on the edge of their seat (and quite likely to be taking personal notes).

With barely any stone left unturned, listeners will be left informed and armed with readily available sources to cite - enough even for those presumed to be wholly informed and researched going in - and will find better use of the Bookmark and Add Notes feature than most other books on the subject matter.

Keep this book around for future reference, and to re-experience the wild ride that is #Deleted.

cancel culture is getting beyond creepy. it's now a threat to our way of life

deleted is an eye opener

Big tech is playing us.

Deleted is an eye opening look into how the social media companies are playing games with what you see, even experimenting with us like guinea pigs. I have a child that worked for both Twitter and Google. One of my former employees works at Twitter. I bought each of them a Kindle version of the book and asked them their thoughts. They confirm the author is straight up righteous. My son informs me there is far more going on than was in the book. The author is conservative. (I happen to like that.) But before you let the title drive you off, keep in mind these companies and the games they are playing effect everyone, regardless of their political stripes. Never forget, even for a moment, if these people can do this to one group of people, they can do it to everyone. The book held my attention the whole way. The author stays clear of the mind numbing geek stuff. The narration is by the author, but is still easy to follow.

Not just for conservatives

This book is about how private companies use bad law to behave badly. While it is written about how big tech is censoring conservatives today, it applies to all tech platforms in the future as well. Private companies are not — and cannot be — the arbiters and guardians of speech. They hide behind laws that allow them to operate with impunity, and have shown themselves to be the servants of the left and of China. America is waking up. This book is helping.

But the warning is far too late for the 2020 elections. While serving as a warning the presented solutions are interesting and perhaps in time - attainable.

I enjoyed the Audiobook!!! Even more so if author had gone into more detail about each subject. I'd be even more prepared to take on Big Tech’s misbehaving ways.

This is the most eye opening book ever written on election interference by big tech corporations. It is like we are living in communist China except Americans have been duped because at least in communist China you know your search results are being manipulated to support the Communist Party.

THE must read book before the election

This book is not only essential reading for each and every user of YouTube, Twitter, Facebook, and Instagram, it contains perhaps the most important warnings to US citizens in 2010 about big tech's dangers that suoercede every threat (and there are numerous) of this turbulant year.

#DELETED was intended to help Donald Trump win the 2020 US presidential election so it is badly out of date in trying to attain that objective. However, it focuses on fairness and reasonableness issues with the major social media and tech companies such as Google, Twitter, Facebook, and Apple particularly as the issues relate Section 230 of the 1996 Communications Decency Act. Thus, the book is very timely even after the election. Indeed, the book is loaded with data and examples of poor behavior by the companies that are still very topical. Author Allum Bokhari also narrates and does so superbly.

What an Eye Opener

Some of this I knew, a lot of it I didn't. And I thought wikipedia was the real deal. Don't trust much of what you see online. We're being manipulated folks

If you care about democracy

You really need to buy this book. It reveals the biggest threat to our freedoms.

well written book. damn scary what these companies do if you're Right of center and have a differing opinion from the left of center.