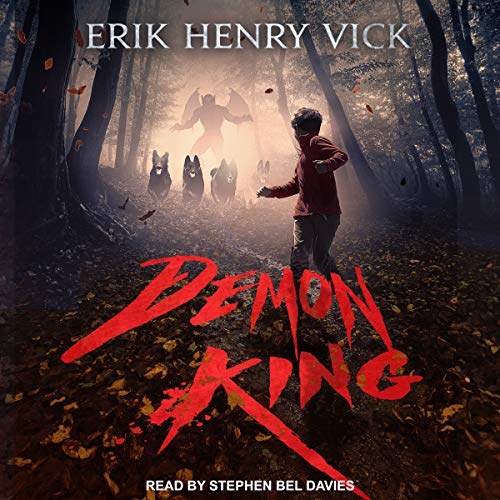 Ancient evils lurk in the Western New York town of Oneka Falls, and they are hungry.

Only three children have encountered them and lived. Psyches fractured, each child has survived as best they could - wrapped in fantasy, the comfort of amnesia, or the silence of isolation.

When those evils intrude on their lives a second time, it sets a chain of events in action that can only end in destruction. But who will be destroyed, the children or the ancient evils that plague the town?

What listeners say about Demon King

The reviews of this one were very mixed, but I thought I’d give it a shot, anyway, because I’m a sucker for kids-in-peril-fighting-monsters story. It was solidly alright.
I did like that the ending took an unexpected turn, not with a big twist or anything like that, but with a sort of genre change- it turned into a Scooby-Doo/Buffy-style adventure with a motley band of heroes teaming up to continue to track down and hunt demons. It was cute.
The child characters were, apart from the fat kid and the girl (by virtue of them being fat and a girl, respectively), basically interchangeable, having no real defining characteristics. Or, no, one kid is middle-class and has a healthy relationship with his parents, and one kid is working class with a useless mother and is abused by her boyfriend. But yeah, that’s it. The adults in the 2000s part of the story fare a little better, and they do get a bit of psychic/magic aided personal development at the end, which was fun. It could not be considered a character driven piece, by any means, but that's ok.
It was a nice, light work-listen with a plot just interesting enough to keep my attention from drifting off.
(Unrelated to anything else, I had thought, huh, the author must be British..? because of some of the colloquialisms used, but nope, he’s American.)

(if you're not used to my reviews, please understand I am a critic. I criticize everything. It doesn't mean the book wasn't great or even that I didn't enjoy the hell out of it)

First, let's discuss the audiobook narrator.
Honestly, he was pretty lackluster. At first blush, he reminded me a lot of Kirby Heyborne (who is amazing!), but as the book went, I saw more and more how little variation he had in his voices. He did very well with tempo and he has a perfectly listenable voice, but the lack of distinct character voices was really distracting (the voices of 9 and 10 year-old girls was basically identical to older women and younger boys, and most of the men used an identical voice).


Okay, story time.
First, you must understand what you're getting into. This is a big story with a lot of characters and a lot of things going on.

Now, as I typically do, I have some criticisms and some things I really enjoyed.

As with other of EHV's books that I've read, the narrative is split between two time periods (much like the main book this one is typically compared to, Stephen King's "It"), so it can get a little confusing at times.

Thankfully, this book is told entirely in third person (unlike "Errant Gods"), which only added to my enjoyment.

However, for a rather large chunk of the future narrative, there were two characters that I thought were one character, which only added to my confusion.

I actually do enjoy the "dual narrative" of this book (and others I've read), as both narratives are important parts of the story and present some distinctly different facets to the characters and main conflict.

But (yes, you likely knew there was a but coming), as with "It" and others which use this device, while I understand why the past and future narratives are switched throughout the story (mainly, there are major reveals in the earlier timeline which might reduce the tension and suspense of the earlier parts of the future timeline if they were already known), I feel like it would make for a more enjoyable and less confusing story if we saw the whole early narrative first, then moved to the future narrative.

Also, minor gripe, unlike in "It," the flashes back to the earlier narrative (or jumps to the future one, if you prefer), have no bearing or relevance on or to the other narrative, so the shifts come off feeling a bit jarring and arbitrary.

I liked Drew, and I kept waiting for an explanation of what he is/does and how/why. And while there was an eventual explanation, it just didn't seem like enough. I kept thinking there was more to it that we were going to see but never did.

I also liked Benny, but honestly I'm still confused about what exactly happened to him and how he ended up where/what he did.

You might consider this a spoiler (though I don't) so please don't read the next 2 paragraphs if you don't want to see it.

We know a bit about his family but literally almost nothing about him. Which wouldn't have been a problem is he hadn't come back into the story after his disappearance in the beginning. I mean, since he comes back later, I feel like we should have had some empathy (or at least sympathy) for his fate, but since we're literally introduced to him 5 minutes before he vanishes, there really isn't any.

Honestly, I really feel this book should have either been a LOT longer (yes, I'm thinking of "It" again here, which was more than 3x the length of Demon King), or it should have been a series. I think 2 books about the childhood part (maybe one about the Owen side of things and one about the King), and 2 or 3 about the adult story (first on Drew, culminating with the revelation that the demons are real, then a book on the two cops and the tortured daughter, then use the Mike & Shannon story to bring everything together for an epic finale. And yes, I realize that would require a major overhaul of the story) to really do justice to the concept.

As it was (and I suppose I have this complaint a lot), with such a high concept, I felt like the ending should have had a really epic feel, and it was kind of a letdown. So often, we have these amazing, deep stories that feel so epic, and then the climax takes 5 minutes and we're done. And I can't help feeling like someone just completely dropped the ball.

I mean, don't get me wrong, I wasn't expecting a Wheel of Time level climax (you know, an entire 400k+ word book that is literally all devoted to the final battle), but something a little more epic would have been better.

And on that note, I have to say I was a little disappointed at the lack of resolution to the earlier narrative.

All that said, though, I did enjoy the book. There are serveral pretty blatant hat tips to Stephen King (and, if I'm not mistaken, Dan Wells) that add some flavor without feeling too hokey, and I appreciate that there were a few twists toward the end that I did not see coming (at all!).

Bravo, Mr Vick.
I can't wait for the next one to release in audio.

a Strange story, read in an odd manner.

If I could figure out how to I'd have returned this. The story is strange and somewhat confused, the performance is not to my taste as it simply distracts and makes it more difficult to follow the story line.

I'm going to listen to this again.

An interesting storyline with a vivid imagination. Will listen to it again for sure. Loved the characters.

Decent tale of the supernatural. The storyline definitely had weak spots and there were a few parts that made no sense at all but, generally, it was entertaining. The performer did a good job which helped the weaker aspects of the story. If there’s a sequel, I would listen to it.

Loved it! Wished I had read it sooner! Is there a sequel?definitely recommend!suspenseful edge of your seat fun!

strange book, lot of "F BOMB" !! awful read. wish I had exchanged it

should be a movie.

loved it should be written for the screen. I'd watch it in the theater and or the television. loved it

Really enjoyed this book. I will definitely be looking for more by Erik Henry Vick. I listen to books while I commute. I found myself sitting in my car after I got home just to keep listening.

Thia was a really good book.I wish I'd have started with it instead of book 2! Someone is kidnapping kids. Something is in the woods. Stephen Bel Davies was a fine narrator.

Was really hard to stay interested. Would not recommend to anyone. Not a great result