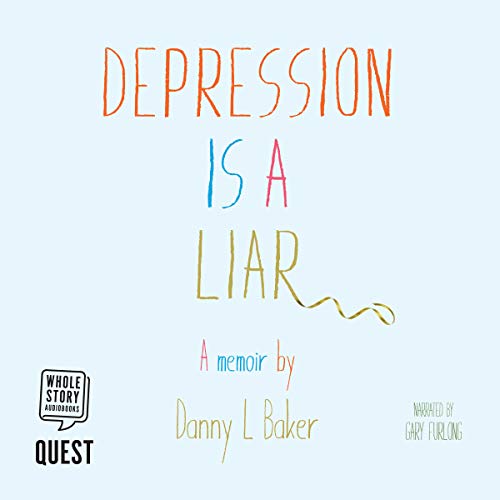 Depression is living in a body that fights to survive...with a mind that tries to die.

Depression is fear, despair, emptiness, numbness, shame, embarrassment and the inability to recognise the fun, happy person you used to be.

Depression is the incapacity to construct or envision a future.

Depression is losing the desire to partake in life.

Depression can cause you to feel completely alone, even when you’re surrounded by people.

Worst of all, depression can convince you that there’s no way out. It can convince you that your pain is eternal, and destined to oppress you for the rest of your days. And it's when you're in that horrifically black place, staring down the barrel of what you truly believe can only be a lifetime of wretched agony, that your thoughts turn to suicide - because depression has convinced you that it’s the only way out.

But depression is a liar.

Recovery IS possible - and I can prove it to you.

My name’s Danny Baker, and for four years, I suffered from life-threatening bouts of depression that led to alcoholism, drug abuse, medicine-induced psychosis and multiple hospitalisations. But over time, I managed to recover, and these days, I’m happy, healthy, and absolutely love my life.

This is a memoir that recounts my struggle and eventual triumph over depression. It is highly recommended for the following people:

People who don’t believe that it’s possible to recover from depression and find happiness again (I will show you that it is); people who keep relapsing over and over again, and accordingly believe that they’ll never truly be free of depression (I’ll explain why you keep relapsing, and tell you what I did to ensure that, over time, my relapses occurred less and less frequently before eventually petering out for good); people with depression who want to feel understood (you’ll in all likelihood be able to relate to the majority of my story and after reading it, I promise you that you’ll feel far less alone); people whose perfectionistic tendencies contribute to their depression (being a perfectionist contributed to my depression in a major way, but I’ll show you what I did to control those tendencies so that they stopped triggering my depression); people who drink and take drugs to cope with their depression (no judgement here - I did it too - but after seeing how much it exacerbated my depression, you’ll hopefully choose to stop); people who are close to a loved one who suffers from depression and want to better understand the illness (I promise I’ll give it to you straight and not sugar-coat a thing).

NB: This is a re-release of a previously-published audiobook.

What listeners say about Depression Is a Liar

If you are depressed, this will make you more depressed. Last thing you need is someone yelling.

I really enjoyed this book!

I definitely could relate with almost all of everything that he spoke of. I loved the few cursing rants he would describe through out the book, made me feel like a friend was just talking to me! Thank you for sharing your experience Danny, it lets me know that I'm on the right path.

Short as it is there was a full paragraph repeated taken from the beginning of the book
I kept listening in hopes that there is something other than the authors experience with depression...... Didnt find it

Don’t waste your money Nothing but a journal

Author was great at detailing painful depression experiences but failed to be as detailed about recovery experiences which should have been the whole point of the book for people trying to find hope of recovery from depression.

Absolutely amazing and very encouraging I started this book not really knowing what I’ll get out of it and am blessed to have read it.

At a lot of points of the book I thought “omg that is exactly me”. I related a lot. Not much of a solution book but a history of mental health with a hopeful ending. That’s exactly what I needed tho.

Helped me understand that my depression and my addiction are best buddies. Helped me admit to myself that I got a problem and I need help (step 1). It’s a good place to be. Thanks.

As someone who has also struggled on and off again with debilitating depression, I found this book to be very inspiring and yet very honest. Thank you Danny.

very informative and correct. I felt what he felt as he told his story. yay