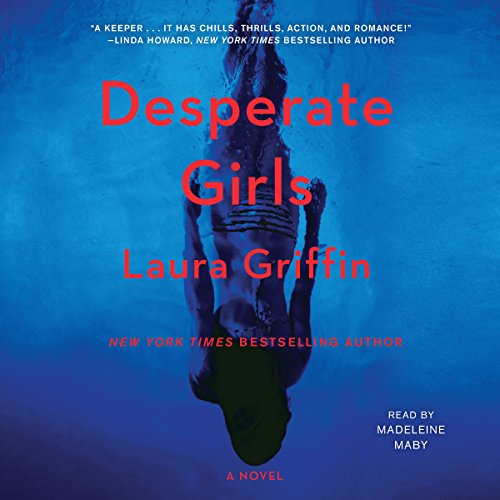 Written by: Laura Griffin
Narrated by: Madeleine Maby
Try for $0.00

New York Times best-selling author Laura Griffin’s Desperate Girls is a tightly wound, fast-paced romantic thriller that follows a desperate woman on the run as she hides from a killer’s symbolic revenge spree.

Defense attorney Brynn Holloran is right at home among cops, criminals, and tough-as-nails prosecutors. With her sharp wit and pointed words, she has a tendency to intimidate, and she likes it that way. She’s a force to be reckoned with in the courtroom, but in her personal life, she’s a mess.

When a vicious murderer she once helped prosecute resurfaces and starts a killing spree to wipeout those who put him behind bars, one thing becomes clear: Brynn needs to run for her life.

When the police come up empty-handed, Brynn turns to a private security firm for protection. But when she defies advice and gets involved in the investigation, even the former Secret Service agent assigned to protect her may not be able to keep her safe. With every new clue she discovers, Brynn is pulled back into the vortex of a disturbing case from her past.

As the clock ticks down on a manhunt, Brynn’s desperate search for the truth unearths long-buried secrets and reignites a killer’s fury.

“I love a strong, smart heroine, and defense attorney Brynn Holloran is exactly that. Desperate Girls is a nail-biting read from the very first page to the final, shocking twist. I could not put this book down.” (Melinda Leigh, Wall Street Journal best-selling author)

What listeners say about Desperate Girls

I don't normally write reviews, but I just finished listening to Desperate Girls and it was painful! The story was pretty good and typical Laura Griffin, but I almost didn't finish it because the narrator was so bad. This is one book to read not listen to.

I thoroughly enjoyed the first book in Ms. Griffin's new Wolfe Security series. Complex characters, both male and female who are career driven and focused. Needless to say they butt heads a lot but learn to respect one another.

Desperate Girls is a romantic suspense that unfolds at a steady pace. As the story develops the suspense builds, but it never creates what I call an “on the edge of my seat” type of anxiety. Instead, it is more the niggling uncertainty that hangs in the background of a slow-burn thriller with an even slower burn romance. I like it a lot.

The narrator does a good performance. I enjoyed listening to the characters come to life.

Good story, kept me engaged during long drives! Narration was good not strange like some of the other books 👍

not well thought out

I REALLY hate giving bad reviews especially when it comes to things creative...but sadly that's JUST what this story is lacking...creativity.
Performance of reader was very distracting. I felt like my 5th grade elementary teacher was reading it...and don't get me started on the male characters....lawdy...the way she "lowered" her voice. Cringe worthy.
The characters never developed enough to give a crap about them. Half the time I didn't know who was who because there was zero character development.
The "romance" scenes were so forced. (gotta have some sex scenes so let's throw one here....and here...and here).
Sadly, I wasted a credit. I'm starting to wonder how authentic Audible's reviewers are.

Thought I’d try this book and so glad I did. Absolutely LOVED it! Great story and great characters. Now I need to find more byLaura Griffin