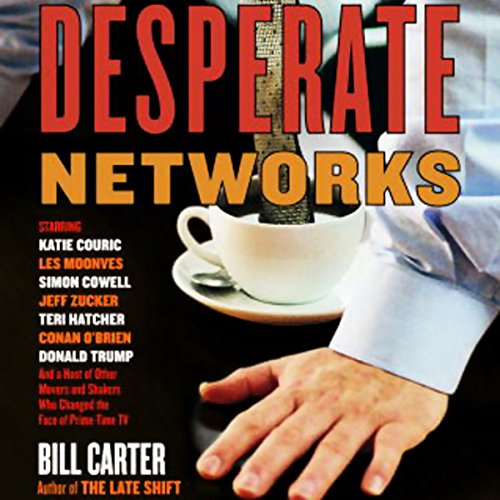 Written by: Bill Carter
Narrated by: Dean Olsher
Try for $0.00

In the executive offices of the four major networks, sweeping changes are taking place and billions of dollars are at stake. Now Bill Carter, best-selling author of The Late Shift, goes behind the scenes to reveal the inner workings of the television industry, capturing the true portraits of the larger-than-life moguls and stars who make it such a cutthroat business.

In a time of sweeping media change, the four major networks struggle for the attention of American viewers increasingly distracted by cable, video games, and the Internet. Behind boardroom doors, tempers flare in the search for hit shows, which often get on the air purely by accident.

The fierce competition creates a pressure-cooker environment where anything can happen.

What listeners say about Desperate Networks

How Sausage is Made

You have to be really be interested in corporate intrigue and the entire creative/business process to stick with this title. But for me, it was fascinating. How did three of the most recent TV hits --Desperate Housewives, American Idol and Lost -- ever get created? And how did highly paid executives MISS these hits in the development phase? Dean Olsher (confession, a former colleague) does a fine narration job. TV is an odd business of luck, talent, egos and score settling. Not a bad idea for a TV show...oops, it already exists on NBC!

It delivers on the history of TV networks, but discounts the effects of the Internet and other forms of media and entertainment on its decline in recent years.

This behind the scenes look into the television industry is humorous, informative, and riveting. Focusing on recent breakout hits such as CSI, Desperate Housewives, Lost, and American Idol, the author demonstrates an affinity for the subject, and his tales of the machinations behind the curtains of the major broadcast networks proves William Goldman's adage, "Nobody knows anything." The book mainly discusses the period from 1999-2004, so if you're looking for something on the history of broadcasting, this isn't it. But if you'd like to hear more about how the television industry has been changing in recent years, check it out.

A great snapshot of a transition in TV history

I’ve read Warren Littlefields “Top of the Rock” and this feels like the intended sequel. What happened to NBC after Seinfeld and Friends were over? They went first to last, and how did CBS and ABC get popular shows with universal acclaim? This book tells those stories too. Good narration. I’m glad I checked this out.

Barreling thru words. Sounds like a medication-fueled march to finish the book that conjures up all the anxiety for the listener. What. Fun?

Fans of The Late Shift will be sorely disappointed in this rambling, pointless look at the race for ratings in the mid aughts.

This was an interesting look into the workings of the big networks and how they build their programming. Considering the recent Jay/Conan debacle, it's fascinating to read especially considering the short portion of a chapter that covers the switch-over from Leno to O'Brien. It's interesting to see how truly lucky these network executives are, despite the fact that they believe they are very skilled. Regarding other reviews indicating the fast pace is hard to follow, I didn't find that to be the case. It might be challenging if you're writing a research paper on the topic, but as a casual read you'll have no difficulty.

I thought it would be tough for him to top The Late Show, but he's done it. One of those audiobooks you actually "save" as you listen because you don't want it to end.

Good But Too Fast

An informative and engaging look at the last few years of network television. The only con is Dean Olsher's rapid, clipped narration. I found myself doing a lot of rewinding. A story well told but not well read.

A pointless listing of events with no direction