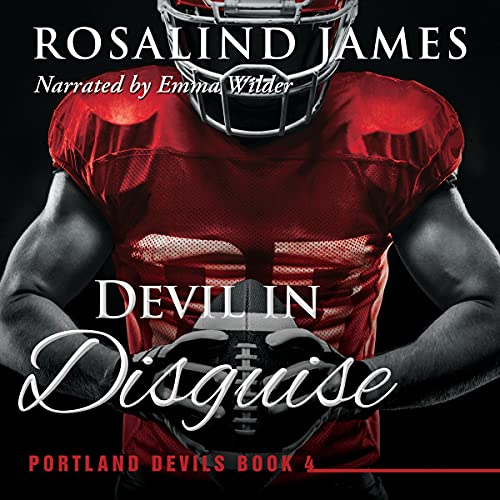 Written by: Rosalind James
Narrated by: Emma Wilder
Try for $0.00

The devil doesn’t come with pointy horns and a tail. He comes as everything you’ve ever wished for.

When discipline is your life, structure’s a good thing, and Owen Johnson’s got plenty of both. An All-Pro NFL center who’s also a cattle rancher? Yeah, that’s structure. His marriage didn’t work out, but then, he picked the wrong woman. A Wyoming ranch doesn’t look nearly as romantic up close. Not to a model, anyway. Next time, he’ll choose better.

Not, for example, a 19-year-old ball of fire like Dyma Cardello, who’s just starting on her own journey. To become an astronautical engineer. After about five years of schooling. Which she’s focused on like, well, a rocket.

Did he mention that he owns a cattle ranch, and she’s a vegetarian? That he’s on the road half the time, and the other half, he’s in Wyoming? That she’s in no way interested in becoming a Good NFL Girlfriend? That it’s getting harder and harder to tell her no? Oh - and that his teammate and closest friend is marrying her mother?

Wait until the press gets hold of that one.

What listeners say about Devil in Disguise

Devil In Disguise –Dyrma and Owen
This is a wonderful book about an intelligent, driven, and extremely outrageous young lady, Dyrma Cardello. She heads from a small town high school in Wild Horse, Idaho to university in the big city of Seattle, Washington. She faces the challenges of no longer being the smartest student in class, being a scholarship student, and having two self-centered, nasty roommates from a fancy, private high school. Oh and there’s the six year older boy friend, Owen Johnson, who is a professional football player, who also happens to be on the same team as her future stepfather. Dyrma wants to make it on her own, but college is tough, and being away from all who love you just makes it that much harder.

Then there is Owen Johnson, professional football center & cattle rancher, who fell in love with a high school student. He wants to make sure Dyrma has time to experience life away from Wild Horse. Time to spread her wings in college. This time he wants a woman that wants both the football player and the cattle rancher.

This story brings us all angst of growing up. Finding out that college is not as easy as some students think. That living far away from family is hard. Dyrma and Owen also find out that long distance romances are not for the faint of heart.
The fabulous Emma Wilder narrates this audio book. Not only does she do great female voices, she also does wonderful male voices. Emma continues to be one of my favorite narrators. She makes Rosalind’s books even better.

I received a free copy of this audiobook in exchange for an honest review. I was not compensated for my review and I was not required to write a positive review. The opinion expressed here is my own.

Hold your sides, as you will laugh so much

I really enjoyed this book, it made me laugh so much, I loved how the characters developed during the book as well, I have read all of Rosalind's books but this one really had me laughing at the characters and the situations they got themselves.

I really enjoyed the NFL game play descriptions, and felt I was at a game and the Wives and Girlfriends outing was hilarious

Another Not to be Missed Experience

The combination of RosaIind James and Emma Wilder continues to amaze and delight me. Despite not being sure what to expect from a story about a 19 year old college freshman and a 26 year old NFL player, I should not have worried because Rosalind can handle it all. And Emma certainly was wonderfully able to bring it all to life.

As with every Rosalind James story, this is more than just a romance. Devil in Disguise touches on so many types of love and relationships: romantic; parental; sibling; and even that love between good friends. While reading this book I experienced happiness, excitement, sadness, angst, anger, and joy and probably a few more emotions too. While listening to Shame the Devil (Portland Devils book 3) before reading Devil in Disguise isn’t absolutely necessary, you will enjoy the story more if you do. I highly recommend listening to Devil in Disguise.

I received a free copy of this book in exchange for an honest review. I was not compensated for my review, and I was not required to write a positive review. The opinion expressed here is my own.

As always Emma Wilder rocked it !!!

Lots of twists and turns but definitely worth it !!! Rosalind James doesn't disappoint !!!

There is nothing like a Rosalind James book. They are always so well put together they just carry you off to a happy place Through the sad the happy or mad you get the whole picture and the whole story. Simply the best!!
And Emma Wilder is the perfect narrator for The way Rosalind James tells a story She is amazing!

Lots of laughs and emotions

I was happy to see Rosalind James write Dyma and Owen's story. As always Ms. James describes her characters so well and the location they are at or situation so thoroughly you feel as though you are right there. I felt like I was back in my freshman year of college. She also covered the football games very well.

I loved following Dyma and Owen through their daily life's and struggling to keep their relationship strong. I love how strong Owen is and he's always there for anyone who needs him, friend or family. Dyma is a spunky breathe of fresh air. Emma Wilder does an amazing job narrating Ms. James book as always she reads with emotion, switches characters voices with ease and is just an overall pleasure to listen to. This will be a repeat on my audio books.

I feel I start all of my Rosalind James reviews with the fact that the story has all of the emotions anyone could every go through. In this case, Dyma is a very mature 19 year old, who graduated high school and headed off to college. All while leaving behind her rock - her mom and, her boyfriend, Owen, who happens to be an NFL star! Dyma is fiesty and brutally honest, which sometimes tends to get her into trouble. However, she does not back down when faced with hard situations. This story deals with love, bullying, friendship and above all, finding the balance to make it all work. Owen is such a kind and patient man. They compliment each other wonderfully. This was such a great story, and I love how we got to still see Jennifer and Harlan. Emma Wilder did another outstanding job narrating this story!

Owen is a sweet man and Dyma is a firecracker. They make the perfect couple and their love and adventures are worth every minute you spend with them. A combination of American football and the ladies of the northwest make you fall in love with Rosalind's awesome characters. What a FUN book!!

What a terrific addition to the Portland Devils series. Dyma is such a wonderful character with many facets and angles. She is full of energy, ambition and grit. Owen is her opposite in many ways; quiet, unassuming and steady. They both are hard workers who love their family and friends fiercely. The two must navigate their relationship through the 6-year age difference, the logistics of separate locations and where they are in their personal lives.

I enjoyed getting to know Owen’s family, revisiting with previously met family and friends and meeting Dyma’s college friends and foes. All adding to this wonderful book.

Emma Wilder is a great narrator, but the book felt "heavy". I'd like to hear a lively inflection for the happy, carefree segments to lighten up the book when appropriate which would make it easier to listen to.

Devil in Disguise is rich in storyline, character depth and descriptions with a touch less angst than the previous books which is so perfect for this story and couple. Rosalind’s attention to detail of the attire, gifts, cars etc. that each character has or is given adds so much to the story. As always Rosalind James has woven a masterful book that does not disappoint.

I love Rosalind James’ books and this one delivers on all of the feels! Also one of my favorite narrators. I started with the New Zealand rugby books and have all her other now too.