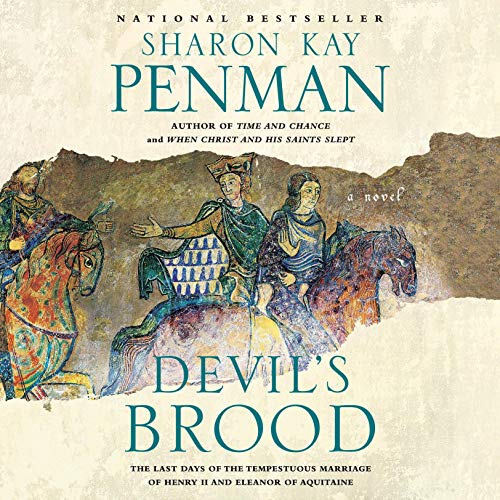 AD 1172. Henry II’s three eldest sons conspire against him and align themselves with his greatest enemy, King Louis of France, but it’s Eleanor of Aquitaine’s involvement in the plot to overthrow her husband that proves to be the harshest betrayal. As a royal family collapses and a marriage ends in all but name, the clash between these two strong-willed and passionate souls will have far-reaching and devastating consequences throughout Christendom.

Devil’s Brood, a breathtaking and sweeping epic of a family at its breaking point, shows how two monumental figures once bound by all-consuming love became the bitterest of adversaries.

“[Sharon Kay] Penman does a remarkable job of depicting passionate, dramatic characters and the perilous times in which they live. For those who like their historical fiction as complex and tightly woven as a medieval tapestry, this book cannot fail to please.” (Library Journal, starred review)

“Penman writes about the medieval world and its people with vigor, compassion and clarity.” (San Francisco Chronicle)

What listeners say about Devil's Brood

A favorite for sure!

While being an audible listener for many years laugh my favorite novels being about Medieval English royalty listening to more on the subject than I can count, I am surprised it took me this long to try Sharon K Penman’s series beginning with “When Christ and His Saints Slept”. The first 2 novels were good enough to keep me interested in and highly anticipating The Devil’s Brood. I have to say I believe this was on of the, if not THE best novel I have listened to yet. I liked it so much I was compelled to write my first review on Audible! The story had me in its grip from day 1 and never let go. As a matter of fact I finished it so quickly I didn’t want it to end. I have never cried at an audible novel but I kept finding myself feeling sorry for King Henry while despising his sons especially Richard! I even had a disdain for Eleanor of Aquitaine which eventually faded during her captivity. I sincerely thought this was the best novel I have listened to. Everything was right from the story to the excellent narration. I’m sorry it’s over and am off to start Lionheart which I am hoping is a fraction as good. Hopefully I’ll have a rave review of that when finished too?! We shall see.

I have to admit this kept me up until 1:00 or 2:00 a.m. several nights a week. I swore I would only listen to an hour before I sleep and then I would find myself at 2:00 a.m. extending the snooze feature on audible.
highly recommend this series easily some of the best historical fiction I've ever listened to. downloading the next book as I write this.

Enjoyed the whole series.
Not a fan of the narrator. Voice sounded like it was faked husky sounding.

I admit I went through this novel twice to get a "full hold" on it.
The narrator is very good, at male voices in particular.
The book is epic, truly spectacular. There are so many people and events the author needs o catalog without making it boring that the task seems impossible, but somehow she pulls it off.
Make sure you read the series in order or you will be lost.

Sometimes difficult for me to read, but brilliant book, does not shy away from the astounding truth of the bitter Angevin family feud. I’d say most of the time a family waits until at least one of the parents is dead to splinter. Not so with this King, Queen and princelings. Amazed at how Penman marches straight forward, piercing my middle child, mother’s heart. Excellent.