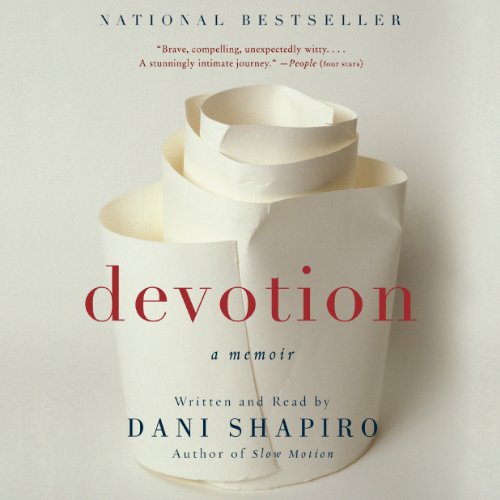 In her midforties and settled into the responsibilities and routines of adulthood, Dani Shapiro found herself with more questions than answers. Was this all life was - a hodgepodge of errands, dinner dates, e-mails, meetings, to-do lists? What did it all mean?

Having grown up in a deeply religious and traditional family, Shapiro had no personal sense of faith, despite repeated attempts to create a connection to something greater. Feeling as if she was plunging headlong into what Carl Jung termed "the afternoon of life," she wrestled with self-doubt and a searing disquietude that would awaken her in the middle of the night. Set adrift by loss - her father's early death; the life-threatening illness of her infant son; her troubled relationship with her mother - she had become edgy and uncertain. At the heart of this anxiety, she realized, was a challenge: What did she believe? Spurred on by the big questions her young son began to raise, Shapiro embarked upon a surprisingly joyful quest to find meaning in a constantly changing world. The result is Devotion: a literary excavation to the core of a life.

In this spiritual detective story, Shapiro explores the varieties of experience she has pursued - from the rituals of her black hat Orthodox Jewish relatives to yoga shalas and meditation retreats. A reckoning of the choices she has made and the knowledge she has gained, Devotion is the story of a woman whose search for meaning ultimately leads her home. Her journey is at once poignant and funny, intensely personal - and completely universal.

What listeners say about Devotion

I first listened to Slow Motion and now Devotion and signing up for the next book. Devotion was very thoughtful and interesting. The subject of defining one’s spirituality is something I am interested in and she takes you along on her journey and into her life in a very open way.

Honest, inspiring, insightful. Transmits peace and contentment. Any spiritual seeker should read this. Thank you

Piercing truthfulness. One of those books that I had to pull over on the side of the road 12 times to record ideas. Artful, deep, authentic.

Save yourself while you still can.

How on earth did this get published?
Glum but well-off middle-aged mom frets that she's not a good Jew and is basically a total drag. Seriously. Zero humor, nil insight. Kind of like listening to the longest most boring self-absorbed therapy session ever.
Oy, indeed.

Universality in Discerning a Faith for Oneself

I liked that Dani shared a lot about her experiences and tied it all in to the theme of her work. One might think on first glance this work might be some new age/wishy washy story, but Ms Shapiro is really a down to earth realist in this book who shares how she found a way that made sense to her for how to be a good person and be good to others for a reason. I am not Jewish or Buddhist or Atheist or Agnostic, which are all addressed in Devotion, but I still got a lot out of it, and I am thankful she read it to me too so I had time to take it in - great voice for rhythmic words!

It felt like endless whining about why she wasn't happy, how she couldn't find what she needed spiritually. I guess I'm old and jaded. You can have a happy life without finding the perfect spiritual path. It's OK to not have all the answers. Get over yourself and go out and take care of others and make yourself useful in the world.

Wow . . . I don't know how I stumbled onto this but sure glad I did. The author's POV and experiences resonated with me. This is not "easy" content . . . it is contemplative and honest and it hit home deep within me. Thank you, Dani.

The book begins with a confused, fearful writer in denial, takes an inauthentic through her life, and delivers confusion and fear. But she does point the reader to Sylvia Boorstein who is the Real Deal.

After reding Inheritance this was a big dissapoint

I want to return this book as I totally lost interest. A let down after reading Inheritance.

Another amazing story by Dani Shapiro

I thoroughly enjoyed every chapter. Dani is a masterful storyteller.

Not so interesting thinking outloud to herself

This is not a story. This is unstrung thoughts that are not even deep or cleaver. Not interesting.

Dani illustrates how she came to, and how most free thinkers come to, constructing our own personal spiritualism. It's seldom what we were fed as childen or what those outside our inner circle expect, but it's authentic, and unique to us. So, you get to see that Dani's title, "Devotion" is more than appropriate for what she conveys in this book.