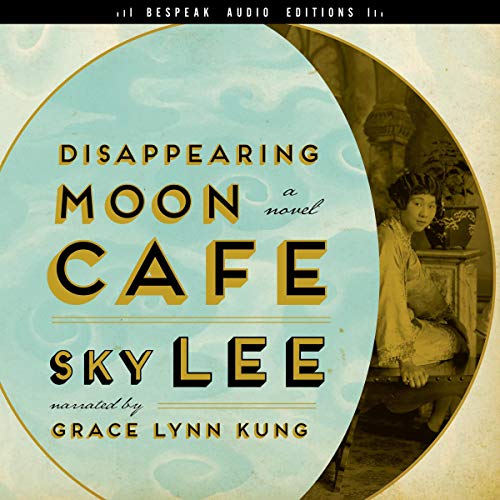 Disappearing Moon Café was a stunning debut novel that has become a Canadian literary classic. An unflinchingly honest portrait of a Chinese-Canadian family that pulses with life and moral tensions, this family saga takes the listener from the wilderness in 19th-century British Columbia to late 20th-century Hong Kong, to Vancouver's Chinatown.

Intricate and lyrical, suspenseful and emotionally rich, it is a riveting story of four generations of women whose lives are haunted by the secrets and lies of their ancestors but also by the racial divides and discrimination that shaped the lives of the first generation of Chinese immigrants to Canada.

Bespeak Audio Editions brings Canadian voices to the world with audiobook editions of some of the country’s greatest works of literature, performed by Canadian actors.

"This ambitious and vastly entertaining first novel follows four generations of a troubled Chinese-Canadian family through its gradual and often painful assimilation and eventual disintegration.... The lively, often riotous spirit of Disappearing Moon Café is never lost in the epic sprawl. This is a moving, deeply human tale about the high price of assimilation, the loneliness of being of two cultures but no longer really belonging to either and the way in which the sordid secrets of the past can cast long, tragic shadows.... If Gabriel Garcia Marquez had been Canadian-Chinese, and a woman, A Hundred Years of Solitude might have come out a little bit like this." (Washington Post Book World)

Wonderful title. I was looking forward to his as it was touted to be a Canadian literary work, an award winning novel. I had read the Jade Peony (also set in Vancouver) and was hoping for something similar.

As this was the audio book, so maybe I needed to read the printed work as the narrator did not differentiate between the characters and I ended up having to jot down some of who the characters were as the story seemed to cover 5 generations of a Chinese family, and as it jumped randomly between the generations it was incredibly difficult to work out where in the story you were.

It was inconsistantly written, sometimes it was the literary work I was expecting, and then it was like reading a bizarre contemporary page turner. As for the incest plotline - what was the point of that?

I thoroughly enjoyed listening to this book, finishing it over two days. It was pretty confusing as an audio book because of jumping through time, different characters points of view, and written letters being read out. However, I enjoyed how lyrical and poetic it was, and perhaps the confusion from jumping about actually added to the mysterious, secret filled plot. It felt like i wasn’t really meant to understand the whole story, much like the characters themselves. Eventually it felt like it was about to come into focus, but it still left me with a confusing, messy, foggy memory of these peoples lives. It was a gripping and refreshing story. This moody impression of China town will live in my mind for years. The narrator is very talented and I enjoyed the pronunciations of Chinese words and inflections.

It’s an interesting story, but couldn’t follow all the characters in audio format. Had to give up.