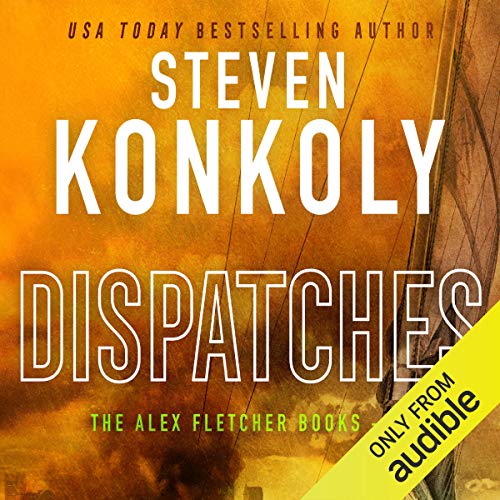 In the near future, a rogue military cabal launches an opportunistic EMP attack against the United States - triggering a cataclysmic chain of events.

On the home front, most citizens continue to struggle with the loss of power and critical infrastructure, exhausting their thin supplies and turning to the mercy of an overwhelmed government to survive the winter.

As spring arrives, Alex Fletcher faces a difficult choice. With their food supplies running low, Alex questions the feasibility of staying with the Thorntons and Walkers at their isolated lake community. While searching Northern Maine for a solution to his dilemma - he stumbles on a secret with the potential to destabilize the entire region.

What listeners say about Dispatches

Not worth another credit. This could have been added to the 2nd to "last" book.

A book without a purpose? No plot, No closure

This book was a let-down. I've been a big fan of the series and while I agree with many other readers that the story needed some closure, there is just not much here at all.

According to the author this book was supposed to wrap up things and fill us in on more of the details, but it fails to do that. I just didn't get it; there seemed no real plot or story to this book, just a bunch of disconnected stuff that again left me feeling like the story isn't over.

This book was just too short; it felt rushed / slapped together from notes and left as many questions unanswered as the previous books did.

It felt more like an introduction to another following story (as this series was from the Jakarta Pandemic) than anything else.

Could you see Dispatches being made into a movie or a TV series? Who should the stars be?

No, there is no plot in this book.

I won't be wasting any more audible credits on such short books!

A good addition to the series

Another great addition to the Perseid collapse series. It adds another part in the story of the fletchers which is great. If you liked the first three books this will be right up your alley, but if you haven’t read those books you’ll be a bit lost. What the author also tries to do as well is show the listener a bit of what’s going on outside of Maine, but since he really doesn’t spend a lot of time on it, it’s nice but I felt as if it left me wanting rather than being an integral part of the story. Either way overall I really enjoyed it!

Mr. Farrell does a very good job with the narration.

This entire series is fantastic. I have really enjoyed it, and I recommend the series to anyone who is looking for thrill, humor, action, and mystery all tied up in to one great book series.

thank you for writing such amazing books. as I listened to each ifelt like I was there🙂. I am looking forward to more books from you. thank you.

The story is very short, and half of it is not believable. Most of it is predictable and full of stereotypes. As the mostly untrained heroes fight against a bunch of highly trained mercenaries it is laughable, and you know the heroes will all be ok as they wipe out the big-bad mercenaries. Terrible ending to a series that was never very convincing or realistic. The narrator was good, but not the story. I can't believe I bought all 4 books. Don't make the same mistake as me.

Was not ready for the series to end!

I have enjoyed the 4 books in this series and the prequel "Jakarta Pandemic." This series is entertaining and frighteningly engaging. The characters are believable and interesting. Praying none of this comes true, but if it does, I will be better prepared!

I loved the way the characters of this series were with each other. Their relationships with each other made me laugh and get stressed. The writing was well thought out, descriptive and made the characters and story come alive! As for Mr. Farrell's narration... AMAZING! He never missed a beat as he rolled from one character voice to the next. He really gave life to each character too!

Part 1 is pointless. Start at Part 2

I wish you could skip part 1. Pointless. Some people might care but those people are dumb.

IF it was central to the story the author should have written those part important to the story, IN TO THE STORY.

I wish I would have paid half as much and only got the second half of this book.