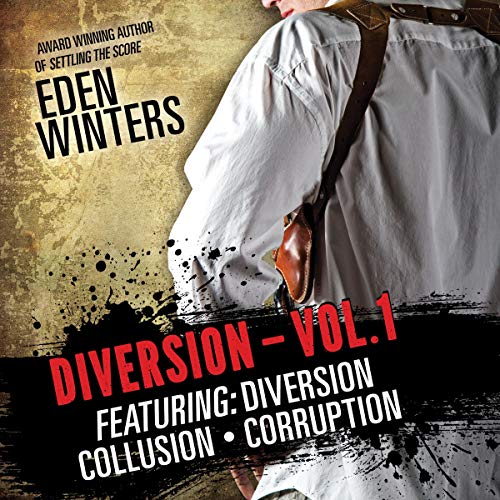 Written by: Eden Winters
Narrated by: Darcy Stark
Try for $0.00

This volume contains Diversion, Collusion, and Corruption of the Diversion series.

There are good guys, bad guys, and then there’s Lucky.

Former drug trafficker Richmond “Lucky” Lucklighter flaunts his past like a badge of honor. He speaks his mind, doesn’t play nice, and flirts with disaster while working off his sentence with the Southeastern Narcotics Bureau. If he can keep out of trouble a while longer he’ll be a free man - after he trains his replacement.

Two men. Close quarters. Friction results in heat. But Lucky scoffs at partnerships, no matter how thrilling the roller-coaster. Bo has two months to break down Lucky’s defenses...and seconds are ticking by.

Former drug trafficker Richmond “Lucky” Lucklighter “died” in the line of duty while working off a ten-year sentence in service to the Southeastern Narcotics Bureau, only to be reborn as Simon “Lucky” Harrison. The newbie he trained, former Marine Bo Schollenberger, is now his partner on (and maybe off) the job. It’s hard to tell when Lucky doesn’t understand relationships or have a clue what any sane human is doing in his bed. Bo’s nice to have around, sure, but there’s none of that picking-out-china-together crap for Lucky.

When a prescription drug shortage jeopardizes the patients at Rosario Children’s Cancer Center, it not only pits Bo and Lucky against predatory opportunists, but also each other. How can they tell who the villains are? The bad guys don’t wear black hats, but they might wear white coats.

Renegade biker. Drug runner. Recovering addict. Wanted by the Southeastern Narcotics Bureau. But he isn’t a crook, he’s the law.

SNB Agent Bo Schollenberger’s solved his cases using his brains and not a gun, and with his partner, not alone. Now he’s handed a tough new case involving designer drugs that turn users violent. One false move could end his life as he immerses himself into a motorcycle gang to locate the source. His fate depends on how well he can impersonate someone else. Someone named Cyrus Cooper.

Cyrus is everything Bo Schollenberger isn’t, including the badass enforcer for a smuggling ring. He establishes pecking order with his fists and doesn’t take shit from anybody, not even the undercover agent who comes to help his case.

When survival depends on a web of tangled lies, lines blur, worlds collide, and a high stakes game turns friend to foe. Lucky knows the difference between Bo the agent and Cyrus the outlaw, but does Bo?

The premise of the books was good, and I enjoyed the investigations plot lines, but the relationship building was a bit unbelievable for me. I dont understand what Beau sees in Lucky or what he gets out of their basically one-sided interactions. It took until almost the end of the 3rd book to downgrade my feelings about Lucky from "can't stand him 80% of the time" to "dislike with a potential for redemption at some point." I feel like 3 books is a long road to only get to that point, and while I'm curious to find out how it all ends, I dont know if I can wait 3 more books for him to finally get his act together.

Narration was enjoyable, and he did a good job of giving each character their own distinct voice.

Loved this so much!

Oh My Gosh! This book or shall I say three books were absolutely amazing. It grabbed me from the beginning and kept me mesmerized. I thought three was the end but was shocked and pleasantly happy to find out there is more.! (Lots more!)
Lucky is an ex-con and serving time in a special task force. He is about to be freed and has to train his replacement, Beau. Sparks fly and soon they end up as more than partners in the field but will Lucky give up his chance at freedom and stay on the team?
Each of these books has a different plot but all are connected in the scheme of things.
You do need to read in order.
Book 1 Diversion
I’m Book one we meet Lucky, Beau and Walter and learn what Diversion is. There is lots of action, twists and turns and nail biting suspense. And the sexy’all tension us hot!

Book2:Collusion. You do have to read ( or listen which I highly recommend) in order.
This book is a new adventure that connects to the past case. More twists and we get to see a different side of lucky. More nail biting suspense and more sex! This one is just as good as the last.
Book3 Corruption
This is book 3 of the Diversion series.
You do have to read ( or listen) in order.
Corruption picks up with Lucky and Beau. They receive new training and Lucky gets a promotion. Beau gets his first solo deep undercover job.
There is so much action. The plot is intriguing and there are twists plus a twists that could bring up ghosts from Lucky’s past.
Oh boy I cannot wait for the next books!

I had to stop, purely awful writing

I feel generous giving this two stars. This was awful. I won't be continuing with the series.

The characters were childish and stupid. The writing is just bad. The story was all over the place and often made little to no sense. I hated how they'd be in a work meeting, and all Lucky did was slobber over other characters, especially Beau, in disgusting and inappropriate ways. Lucky was just an unending jerk. Things would just be thrown into the story randomly regardless of whether they fit what was happening or the story at all. Like suddenly Beau was abused as a child because ... I have no idea.

The weird thing is that the part about pharmaceuticals, and their distribution is really pretty accurate. I was excited to read about that, but I hated everything else enough that I stopped caring. Plus, that part of the story got lost anyway.

Audio: pretty decent accents and character delineation, but I'm sure it also highlighted the neverending weaknesses.

Not my normal kind of book. So glad I branched out

When I first started listening to this set, I wasn't sure I would like it. I tend to like things sappier and when my characters struggle less. This series, however, changed my mind, I am so glad I stuck with it and finished it. It takes a while for Lucky to warm up to Bo, the hot steamy battle for dominance and taking what each one wants was amazing. All the action for each character made this one of my favorite books I've listened to in a long time. Great books. Totally left me hanging for the next book in the series. I can't wait to continue on and see where it takes Bo and Lucky.

By the conclusion of Chapter 9 in the first book, we had enough of Lucky's background to understand how he came by his skill set, why he doesn't trust other people, and especially why he doesn't trust lovers...and it wasn't enough. He was still a jerk. This was a DNF for me.

This box set has the the first three stories of the series. The stories are told from a single perspective, which is unusual in the romance genre, but extremely well written. The plots of each story are the SNB (think DEA for the southeastern US) looking for ways to defeat the bad guys selling/stealing drugs - and that plot is extremely thorough and exciting. The cocky, jerky, ex-con main character (that you’ll LOVE) is the only ‘voice’ in the book, and we see Lucky’s extremely slow change from cocky a$$hole to someone who cares about, well, a few very specific people. The relationship with Beau is a hard won thing- mostly because of insecurities and Lucky’s unwillingness to show his real self, but also because Beau is caring, kind, and patient. But It seems like a real life, organic relationship with truly accurate ups and downs. Darcy Stark is phenomenal as narrator of this series! I bought the entire audio series because the writing is SO good, and Stark is amazing!

I was looking forward to this series. I'm in the middle of book 1 and find myself waiting for.... something (?). The premise is interesting and Ms. Winters seems knowledgeable on the ins and outs of the illegal pharmaceutical trade.... something is missing. First, I don't find Beau's character real believable. He seems too soft to be a seasoned marine of four years. It could be the narrator's choice of voice for him as well. He comes across as almost female. Not a seasoned vet. He also comes across as timid and weak. Allowing himself and his brother to be tied up , spread eagle by a father...yeah, no. I don't know about you but if anyone tried that with me or mine someone would be seriously injured and it wouldn't be me. Talk about taking it lying down. Hope it gets better. Lucky has an interesting and plausible backstory. Beau, not so much.

Stunning characters omg loved it. As a read it was sooo good but listening to it was amazing. The narrator did a amazing job bring the characters to life. Can’t wait for more.

The performance from the narrator is very important for me. I can't listen to a lot, because my English as a non-native-speaker isn't so perfect to follow a whole story over hours, when the narrator speaks too fast or too sloppy. Normally I have to SEE the person, who is talking to me in English. It took me a little bit, to come into the narrator, but at the end, it worked. I only have to take a few breaks between. I'm just not yet finish with the book, but I listen enough to give a review.

3* - it's more then a one-time-listening, but not more then twice a year.
it's like a B