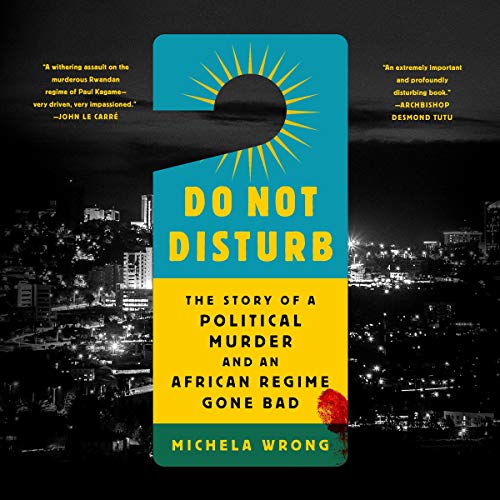 A powerful investigation into a grisly political murder and the authoritarian regime behind it: Do Not Disturb upends the narrative that Rwanda sold the world after one of the deadliest genocides of the 20th century.

We think we know the story of Africa’s Great Lakes region. Following the Rwandan genocide, an idealistic group of young rebels overthrew the brutal regime in Kigali, ushering in an era of peace and stability that made Rwanda the donor darling of the West, winning comparisons with Switzerland and Singapore. But the truth was considerably more sinister.

Vividly sourcing her story with direct testimony from key participants, Wrong uses the story of the murder of Patrick Karegeya, once Rwanda’s head of external intelligence and a quicksilver operator of supple charm, to paint the portrait of a modern African dictatorship created in the chilling likeness of Paul Kagame, the president who sanctioned his former friend’s assassination.

What listeners say about Do Not Disturb

What is true and what isn't?

To her credit, the author freely acknowledges up front that she has virtually no idea of the veracity of any of any information in the book which is not readily and independently verifiable. Prefaced as such, it gives the listener a lot to consider, a lot of people and motives and intrigue, interwoven into the gordian knot of understanding Rwandan, and African, history. In the best of cases, the story would be difficult to follow, but even more so when dismissing the crafted internal propaganda, and the either misinformed or misguided interpretation by outside sources. Claims of deception and/or willful gullibility are sure to dog proponents on either side of the conflict, or rather the multiple sides. There is a definitive viewpoint expressed by the author which certainly will not be received kindly in some quarters. However, it is a comprehensive account of a complex and messy business, sorely underreported in the world press, and the author lays it bare for the listener to judge. But with the caveat that all, some or none of it may be true. All in all, an engaging and informative listen.

This book is marvelous. It provides a sweeping overview but also goes deep into the psyches of the men and women who comprise the regime. Yet the book never feels tedious and the author does a great job narrating. Truly excellent!

A deeply researched and felt book on Rwanda that all journalists and policy makers need to read. Truly magisterial.

A culture of lies finally shown for what it is. Congratulations for a courageous book, well documented and written with insight. Thanks also for captivating reading

I wish more people had the guts to write like she did. It unveils a lot and ties together a lot that we didn’t know.

The wealth of detail--political, historical, human--does not overbalance a galloping narrative. I learned a lot, and not only about Rwanda. Highly recommended.

Incredibly compelling story and subject matter, but the author's slurred speech makes listening a real chore. I wish there was an option to select another narrator.

Reading Do Not Disturb is to view Rwanda from a soaring eagle that can time travel. The narrative swoops between dates, people, places and events - zooming in for pixel clarity or hovering high with broad brushstrokes. It's a breathtaking way to weave a context-rich story. I'm left with a tapestry on which to place the surfacing news from the past and future decades, and to wonder what's really true.

Quite brave yet shocking revelation

I'm quite impressed but not surprised by how well researched and detailed this book is. Michaela doesn't disappoint. Never does. This book really jolted me with the eye-opening chronicles of African politics. God help us!