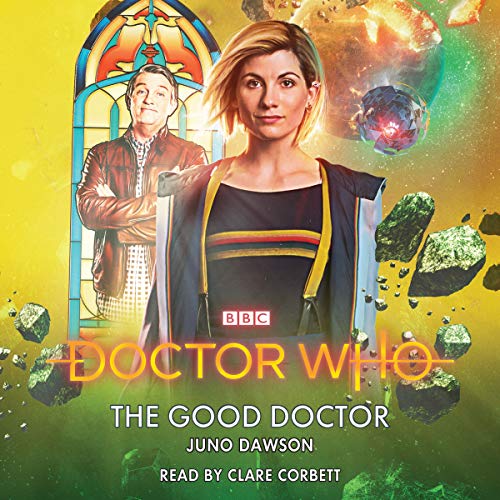 Doctor Who: The Good Doctor

Written by: Juno Dawson
Narrated by: Clare Corbett
Try for $0.00

'To distort the purity of the Good Doctor is an abomination!'

On the planet of Lobos, the Doctor halts a violent war between the native Loba and human colonists. The TARDIS crew departs - only for Ryan to discover he’s left his phone behind. Again.

Upon returning, the Doctor finds that the TARDIS has slipped hundreds of years into the future - and something has gone badly wrong. The Loba are now slaves, serving human zealots who worship a figure known as The Good Doctor.

It’s time for the Doctor to face up to the consequences of her last visit. With Lobos on the brink of catastrophe, will she be able to make things right?

What listeners say about Doctor Who: The Good Doctor

The Good Doctor is Good Stuff!

Considering that this came out mere weeks into Jodie Whittaker's first season as The Doctor (and thus must've been written and recorded while the TV season was in production), it's amazing how well "The Good Doctor" fits in with that season. Both in its mixture of lightness with a message, and well as in narrator Clare Corbett's spot-on take on Whittaker's 13th Doctor.
TV show tie-in novels are often a mixed bag. Many of them are written by authors with no direct ties to the specific show, whose oeuvre runs the gamut of a wealth of genre TV show tie-ins. As such, my expectations are typically low, and the average book ends up an enjoyable take-it-or-leave-it diversion. I've read a handful of Doctor Who books, dating back to the 1990's, and they are very hit and miss. This one, for me was a hit - particularly in the audiobook format. I know that I said it before, but seriously Clare Corbett's 13th Doctor is spot-on. And author Juno Dawson puts the perfect words into her mouth.
The plot, which loosely reminds me of the First Doctor serial "The Ark" - as far as returning to the same place centuries later and discovering that the littlest thing has unintentionally turned an entire society on its head - is presented lightly, with a level of humor akin to that of the 2018 TV season. And similar to the TV season, there some are some seriousness social concerns, just beneath the surface.
Considering how 2019 has been devoid of all but one new episode of Doctor Who on TV, "The Good Doctor" has been a more than welcome filler in that empty spot. I only wish there were more by this author/narrator combination.

Ever Wonder How It Went After the Doctor Helped?

Loved this story! It opens with Doctor resolving a situation on a distant planet and returning to that same planet centuries later.
Tax, Graham, Ryan, and The Thirteenth Doctor all get their moments to shine in this story. No one feels underutilized or ignored.

The Reader is great! I could totally hear the gentle sarcasm from Bradley Walsh's Graham. And the reader's Jodie Whitaker impression is almost spot-on!

Will definitely want to revisit this story in the near future...pun intended!

Truly a Good One

Great story, wonderful performance - honestly I think I liked this better than any recent episode of Dr Who. It takes everything I love about Jodie’s Doctor (the compassion, her non-violence, her love for her companions) and houses it a great story that rides its themes well but also tells a well written and engaging story.

Also can’t say enough about the great performance by Claire Corbett. She gets the Doctors voice perfect and has a great range for the wide variety of characters in the story.

I was very disappointed in the female Dr Who. It was boring, poorly written, and not like any other of the Dr Who books I have read. It was also slow and drawn out.

it was a great story. I really liked it. she did very well at trying to sound like different people are talking.

The best 13th doctor story yet

Absolutely love the book. would recommend to any fan of Doctor Who. There was one brief moment where the sound effects were a bit annoying but it lasted only 30 seconds or so. wouldn't let that discourage you from giving this one a try.

I think the book was great hope on more.